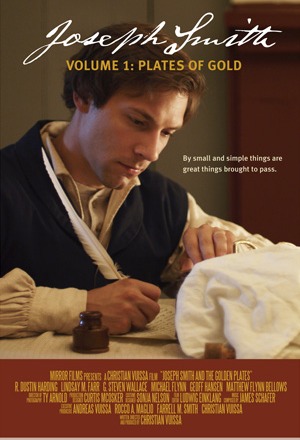 This has been a prolific decade for films about Joseph Smith. Ten years ago the Church produced The Restoration, a lovely short film about the First Vision (watch it here) that improved greatly on the cheesy and dated 1976 version. Then non-Mormon actor Jonathan Scarfe brought conviction and charisma to the role in the Work and the Glory trilogy, his performance arguably the best aspect of that well-made, but uneven and incomplete, series of films. Later, Nathan Mitchell was so good in Joseph Smith: The Prophet of the Restoration (watch it here), Emma Smith: My Story (watch it here), and other films that his portrayal became definitive for many viewers. Now we come full circle as Dustin Harding, who was 15 when cast as a 14 year-old Joseph in The Restoration, steps back into the prophet’s shoes for Joseph Smith: Plates of Gold, the first film of a planned trilogy by acclaimed writer/director Christian Vuissa (Errand of Angels, One Good Man).

Seeing Harding step into the role a decade later allows for a nice bit of consistency, as well as driving home the reality of just how young Joseph Smith really was when he endured intense persecution, translated ancient scripture, dealt with the death of a child and near-death of his wife, feared for the loss of his soul along with the 116 manuscript pages, published The Book of Mormon, and organized the restored Church of Jesus Christ.

Audience members, accustomed to older-looking actors chosen to simultaneously portray the prophet from his 20’s into his 40’s, may be startled at the reminder that Joseph was very much young and inexperienced. Harding, just fine into The Restoration, has matured into an excellent actor capable of portraying a wide variety of traits and emotions. Credit writer/director Vuissa, as well, for challenging Harding as an actor with his rich screenplay; together they create perhaps the most human and rounded screen depiction of Joseph Smith yet.

The prophet described himself as a rough stone rolling, his edges and flaws being knocked off and smoothed as he smacked into the adversities of life. The film certainly captures this. Here Joseph is both faithful and flawed. He’s steadfast in doing God’s will regardless of mockery and persecution, but displays signs of annoyance on his path to turning the other cheek. His faith in God is immovable, but he doubts himself and his own worthiness. He speaks with awe and reverence of the Jesus Christ, but is frequently capable of giddy over-exuberance. He displays excitement over his romance with Emma and nervousness over dealing with a new father-in-law. In short, he is totally relatable, his humanity standing out against the extraordinary backdrop of miraculous events.

The other actors also fare well. Michael Flynn (The Best Two Years, The Lamb of God) finds layers to Joseph’s father-in-law, beyond the initial growling disapproval (as he cleans a gun, naturally). Matthew Flynn Bellows (Forever Strong), as a rival for Emma’s affections, likewise takes a potentially one-dimensional character and forms him into someone real and interesting. Lindsay Farr gives us an Emma Smith who, like Joseph, begins young and naïve but grows in faith and wisdom as the film goes on. The best compliment I can give of her film debut is that she never comes across as acting; her performance feels real and organic, especially in a grueling childbirth scene.

The cinematography is solid and eye-catching, while the musical score by Jimmy Schafer compliments the story nicely without drawing too much attention to itself. Most impressive, perhaps, is the attention to historical detail, from the period clothing and architecture to the inclusion of moments and accounts not found in other film portrayals. The decision to make a feature-length film about one period of Joseph’s life pays off handsomely in the film’s ability to examine the details and characters up close.

If the film has a flaw, it’s that it often chooses to tell instead of show. Key events are merely alluded to or described. The audience learns of the First Vision, Joseph fending off attackers, and the experience of the three witnesses the same way early Saints did…through the testimony of those who were there. Perhaps this is the result of budgetary constraints, perhaps Vuissa didn’t feel the need to show what others already have, or perhaps he preferred to leave things to the viewer’s imagination.

To be fair, the dialogue and acting are so good that this is far from a deal-breaker. The movie remains compelling, moving, and powerful. Nevertheless, the effect of telling instead of showing is that the film sometimes unfolds like an excellent stage play, adapted wholesale and filmed on-location. Here’s hoping that Plates of Gold does well enough that further installments in Vuissa’s planned trilogy can be more ambitiously cinematic.

Minor squabbles aside, Joseph Smith: Plates of Gold is yet another triumph in what has been an excellent year for Mormon cinema, following on the heels of the charming romantic comedy Midway to Heaven and the stunning pioneer drama 17 Miracles. Vuissa continues his track record of handsomely-made, well-acted, and inspiring films. This is easily his best work yet; his take on the Prophet displays a perfect balance of reverence for the work and mantle of Joseph Smith with a grounded rendering of the prophet’s idiosyncracies, foibles, and virtues. This is a film to share with family and friends and is not to be missed in theatres. GRADE: A-

Joseph Smith: Plates of Gold opens on Friday, September 2, 2011. Locations and showtimes can be found at https://josephmovie.com/ GRADE: A-

Jonathan Decker is a marriage and family therapist in St. George, Utah. He has a background in film and stage performance, and currently writes Hollywood film reviews from a LDS perspective at his website: www.mormonmovieguy.com