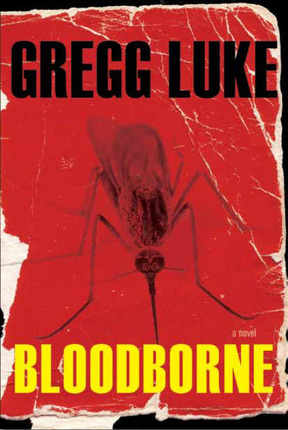 To begin with, the cover of Gregg Luke’s newest medical suspense novel creeped me out.  It looked way too much like a ragged paperback a creepy kid back in college lugged around everywhere on campus and pored over instead of his text books. Besides it features a mosquito and I’ve no fondness for the nasty little blood suckers.  But the cover is oh so appropriate for Bloodborne.

Dr. Erin Cross is brilliant with a PhD in epidemiology who only wants to develop cures for diseases, but a simple stop for lunch one day at a local deli results in several cruel, threatening  text messages arriving on her cell phone and a gunman opening fire on management and customers, followed by the gunman’s suicide.  Erin’s life is saved by former Marine special ops, Sean Flannery.  Something about her rescuer annoys Erin and she loses no time returning to the laboratory where she is employed, only to discover she has been locked out of her office and the laboratory security guard is dead.  Instead of reporting the dead security guard, she makes a surreptitious exit and parks some distance from her apartment.  She finds her apartment ransacked, removes the data she suspects was the reason for the break in, and attempts to leave as quietly as she entered.  She is spotted, shots are fired, but she makes what she hopes is a getaway in her 350Z.

Sean receives a desperate text message from the woman he assisted the previous day.  She’s trapped in a Walmart changing booth with both killers and police hunting for her.  He rushes to her rescue and they soon learn someone is tracking her.  He takes desperate measures to end the tracking and keep her safe.  Yet even in his hidden cabin, there are questions of trust between the two and Erin suspects Sean isn’t all he claims to be.  Something about him just isn’t right.

Erin suspects a fellow scientist, Jacob Krantz who rushed her H1N1 serum to market prematurely and injected his own daughter with it in an attempt to save her life, and instead caused her death, is somehow involved in the various attempts on her life, but both she and Sean suspect that whatever is going on is bigger than the amoral scientist.  They are not aware he is on a Pacific Island preparing to use the inhabitants as guinea pigs in a test of a biological weapon he created with knowledge he stole from Erin’s failed H1N1 serum and his plans include mosquitoes and the annihilation of the island’s population. They have no way of knowing something even more sinister than Krantz is at large.

Luke does a masterful job of explaining biological and medical terms and reactions.  Being a pharmacist, he knows the correct terms and how to make them understandable to non-medical readers.  He’s also a master at building suspense and creating believable characters, inserting realistic dialog, and keeping readers turning one page after another without a break until the story is finished. He makes even an unbeliever question whether there might be some validity to the conspiracy rumors and theories that have abounded for centuries.

Two minor points bothered me some. I question whether a woman of almost thirty, who is brilliant and independent, would fall apart so completely as Erin did in the opening chapters of the book and I also question whether it would have occurred to her to call Sean for help when she was stuck in the changing booth.  In light of later events I wondered why he wasn’t already out looking for her or hadn’t followed her from the deli.

Mystery/Suspense readers will love Bloodborne.  Already an acclaimed writer of medical suspense, this novel places Luke among the top writers in this field.

Luke traveled to mosquito endemic areas for research on this book and has extensively studied parasitology and blood-borne diseases.  He traveled to the Yucatan peninsula during the H1N1 pandemic of 2009.

Luke was born and raised in California, served an LDS mission in Wisconsin, then attended several universities where he studied biological sciences before receiving his pharmacy degree at the University of Utah.  He’s very much a family man who enjoys a broad spectrum of activities from music to nature with his wife and children.