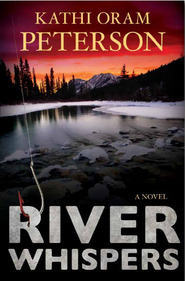 From one of the most dramatic and appealing covers to appear so far this year to a gripping tale that will keep readers turning “just one more page” River Whispers by Kathi Oram Peterson is a novel not to be missed.

Regi Bernard is a young widow struggling to make her own way in life with the help of her sister, who is also widowed, running a bed and breakfast near a small Idaho town along the mighty Snake River.  Regi really doesn’t have much interest in running their business; she can’t cook and cares little about housework.  Her interests lie with horses, raising cattle, and fishing.  Unfortunately most of her land and livestock had to be sold during her husband’s illness to her former boyfriend, Samuel, who abandoned her years earlier by running away to Alaska when they were just teenagers.

Ducking out of chores at their B&B, Regi heads for her favorite fishing hole one early morning.  It’s not a big trout she finds that morning, but a dead ranger with a knife still in his throat.  The ranger is a man she detests for the lies he spread about her daughter and the cruel way he dumped her.  He’s also the man she threatened the day before for his cruel behavior toward an old woman digging through the garbage behind a local cafe.  Regi goes in search of the sheriff and when they return to the spot where she discovered the body, it’s gone, only to surface a short time later on the back porch of a local nurse.

Regi had motive and  opportunity, but it soon becomes clear her former boyfriend, who would like to take up where they left off years ago, also had a run in with the victim the day before and the knife used in the killing is his, though it mysteriously wound up behind the front seat of her jeep.

Regi’s hot temper is well known in the small community and there are many who assume she is guilty of the murder.  One of these, is the victim’s father-in-law, the nearby Park’s superintendant. Regi’s sister, Claudia, becomes involved in clearing her sister’s name and is only one of her allies.  Samuel, even though they fight any time they’re together, is convinced of her innocence as is a strange old woman who pretends to be an Indian.  The sheriff struggles to handle the case professionally and protect Regi from unfair treatment, but it soon becomes apparent someone means to kill Regi too.

This novel has a large cast of characters and it is not easy to determine who has the greatest motive to kill a disliked man.  For so many characters, Peterson has done a commendable job of developing their various personalities and traits.  She handles not only personality traits well, but various forms of dementia too, along with the twisted emotions left behind by betrayal, abuse, and lies. The setting feels comfortable and real. The plot moves quickly and is filled with plenty of unexpected twists, turns, and psychological surprises that will keep the pickiest reader  happy and glued to the pages.

The only area I found unbelievable was Regi’s total inability to cook.  I doubt a thirty-eight year-old woman in this age of electric stoves and microwaves wouldn’t know how to prepare a simple meal and the scene where she thoroughly messes up such a meal felt a little unrealistic to me.  This is Peterson’s fourth novel.  She used a familiar setting for this book since she was raised in southeastern Idaho and grew up near the Snake River.  She graduated from the University of Utah and worked for several years, writing and editing children’s books for a curriculum publisher.  River Whispers can be counted as one of her best works.

I can’t review my own just released romantic suspense novel, If I Should Die, but readers may be interested in reading the back liner. 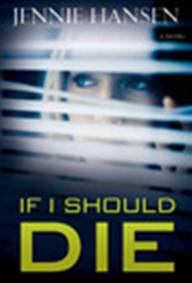 One morning on a routine jog, Kallene’s running partner, Linda, confides that she’s filing for divorce. The next morning, she’s gone without a trace, leaving behind her frightened young daughter. Since Linda’s enraged husband refuses to notify the police, Kallene steps in to initiate a missing person search, not knowing it would soon become a murder investigation—or that she’d soon fall for the charming lead detective. With Linda’s handsome brother also on her mind, Kallene must navigate the rapids of a double romance as well as the deepening suspicion in her upscale Utah neighborhood. Intrigue turns to danger as Kallene faces the consequences of hasty judgments. And when startling new evidence casts Linda’s murder as the work of a determined killer, Kallene needs the intervention of unlikely heroes to avoid being the next victim.