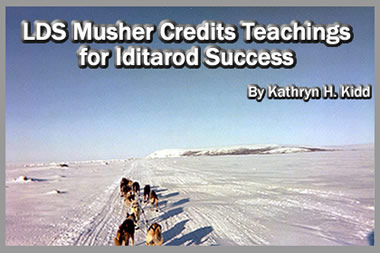 Jeff Holt, a forty-four-year-old Latter-day Saint from the North Pole Ward, put his name in the record books this year when he became probably the only person who has ever run the Iditarod dog sled race while listening to the Book of Mormon.

The Iditarod is undoubtedly one of the most grueling physical challenges on the planet.  This 1161-mile race from Anchorage to Nome crosses three mountain ranges, and the ideal traveling conditions occur when the temperatures are about fifteen degrees below zero.  Only about 575 mushers have completed the Iditarod in its 35-year history – and because many contestants run the race every year, the actual number of people who have competed is far lower than that.

By contrast, nearly 2,000 climbers have reached the summit of Mount Everest. 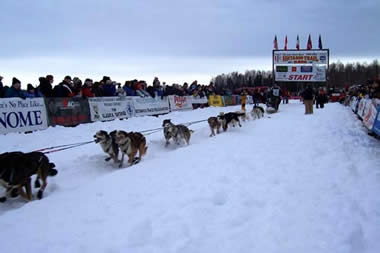 Jeff and his team start their 13-day journey in Anchorage.

Jeff, an Idaho native, became a musher almost by accident.  Seven years, he and his wife Gaynel moved to Alaska with their seven children so Jeff could teach school.  The teaching job was eventually replaced by a job in an oil refinery, which featured the same pay without the office politics and the parents calling his house in the middle of the night.

Even though teaching didn’t last, the Alaska lifestyle caught on with a vengeance.  Three years ago, the children brought home three dogs whose mother was unable to care for them.  Those three dogs were the beginnings of the family kennel – a kennel that now numbers 30 racing animals.

Jeff soon realized that if he was going to own sled dogs, he might as well race them.  His goal was the 2004 Iditarod, although he was able to cut his teeth on lesser races.  Some of the children also joined the racing circuit – most notably, his 15-year-old daughter Baillee.

A serious sledding accident ended Jeff’s dreams of running the Iditarod in 2004.  His hand and wrist were broken, one of his dogs was killed, and two other dogs were seriously injured.  But he got back on his sled and was anxious to enter the 2005 competition.

“I entered the race as a rookie with no expectations other than to complete the race,” he said.  “I’m a very competitive person, so the idea of not competing was difficult for me.  But that’s what we decided to do.  I wanted to finish the race, and I wanted to do it with a healthy team.”

The race was preceded by a banquet, where Jeff and the rest of the mushers were treated like superstars.  “Talk about being overwelmed,” he wrote in his online journal.  “I stood in the Sullivan Arena watching a couple thousand people scramble around to get their pictures taken or get autographs from any and all mushers . If I got cornered by one person I was stuck for 5 minutes signing autographs.  It didn’t do much to keep me humble.”

He added, “The Iditarod is huge.  It is kind of cool to be a part of it.  This thing I have gotten into is bigger than life itself.  It really is the Super Bowl of Alaska.” 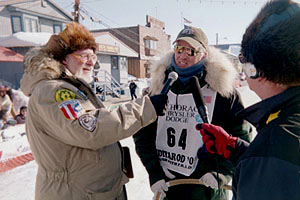 Jeff enjoyed celebrity status before and after the race.

The glamour of the Iditarod wore off pretty quickly, once the race actually began.  “When you run at the back of the pack,” Jeff said, “you’re running through dog poop.”  Not only is this unpleasant for the dogs, but it’s also unhealthy.  “Any viruses the other dogs have, you’re going to pick up.  My dogs stayed healthy, though.  I was blessed from above.”  When he finished the race, the veterinarians said his were the healthiest dogs that made it to Nome. 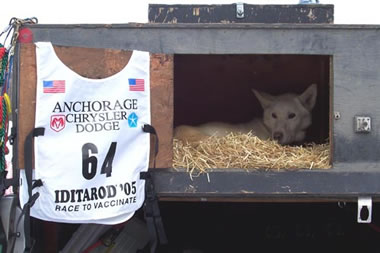 Jeff soon learned that it was too warm to drive his team during the day, so he traveled by night.  Some 79 teams started the race, but not all the teams finished.  Usually the closest person to Jeff and his team might be a few miles ahead of him, or somewhere behind.  Except for the three checkpoints, where Jeff loaded up on dog food for his team and Chinese food for himself, he was alone for most of the race.

God on the Trail

“When you’re out on the trail, you’re by yourself,” he explained.  “It’s just you and the dogs that are there in front of you.  I carried an MP3 player with me and played songs from my youth.  Rock.  Country & western.  On top of that I had the loaded version of the scriptures.  By that I mean all the standard works and six other books – History of Joseph Smith by His Mother, Discourses of Brigham Young, and others.  I listened to the Book of Mormon one and a half times, as well as Joseph Smith and the Discourses.   When I wasn’t listening, then I would pray.  I’d talk to my maker.  We’d just talk.”

Praying as he drives his sled is a way of life for Jeff.  “My wife and I are pretty close,” he said, “and if I’m out of sorts she finds a way to get me out on the runners of my sled.  I always say my prayers when I’m out there and I come home a better person.”  He quoted a portion of Doctrine & Covenants 29:34 – all things unto me are spiritual.  “Even running dogs, all things are spiritual.”

Because he likens everything to spiritual matters, Jeff learned a lot of lessons on the Iditarod trail. “The greatest lesson is perseverance,” he said.  “Most of the dogs had 2000 miles of training on their feet just this year before we got there.  Behind them stands a driver that has probably 3000-4000 miles of training.  Those dogs weigh between 45-55 pounds.  They’re not very big.  For a domesticated animal, they’re probably pound for pound the strongest animals around.  They can go a hundred miles without stopping except for a snack.  That’s eight to ten hours of constant running.”

There were other lessons, too.  “The spiritual thing that stood out to me the most was ‘hold fast to the iron rod,'” he said.  “I wanted to travel during the day to take pictures, but it was way too warm during the day.  When I left the ghost town of Iditarod, it was 42 degrees and raining hard, and that was at 7 o’clock in the morning.  Dogs are best when they are running 10-15 degrees below zero.  I started running at night.”

He continued, “The trail markers were pieces of survey lathe that had reflective tape on them.  To see the trail markers, we all wore headlights.  The strength of the light dictates how far you can see down the trail.  If you have a dim headlight, you can see a couple hundred feet.  If your light is strong you may be able to see a half a mile.   The most powerful thing that came to me was hold fast.”  Life is like the Iditarod in that “if you have a weak headlight you’re not going to see far ahead of you.  If a storm comes up you’re not going to be able to see as many of the markers.  But you can always see one ahead of you.”  In the Iditarod, the trail markers were Jeff’s iron rod. 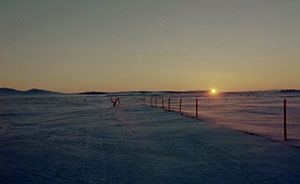 “Another one that was pretty important to me was the trial of your faith,” he added.  “I was between a checkpoint called Ophir and the ghost town of Iditarod.  I was three or four hours past Ophir and I ran into a windstorm.  The winds were blowing 80 to 100 miles per hour.  The wind blew my team and my sled over three different times.  When I could not see the pair of dogs that were directly in front of me, I figured it was time to stop.  I anchored the team down, put coats on the dogs, turned my sled over, and got out my sleeping bag.  Before I got in the sleeping bag I stood and, using the priesthood of God, commanded the winds to calm so I could continue my endeavor.  About four hours later the winds calmed.  Not one time did I run through another windstorm. There was an infamous place going up the Yukon River where there should have been winds for a 125-mile stretch.  There were no winds on the Bering Sea either.  Later I learned that the team ahead of me had winds of 30-50 miles per hour, and the team behind me had the same winds.”

He talked about the trial of faith that is mentioned in 1 Peter 1:7.  “This wasn’t a trial of my faith,” he amended.  “It was an exercise of my faith.”  And this exercise of faith was rewarded.  The experience reminded him of Alma 29:15, “they have labored exceedingly . how great shall be their reward.”  He also remembered Doctrine & Covenants 58:4, which talks about blessings following tribulation. 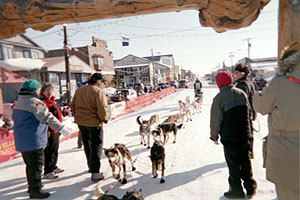 Jeff and his team cross the finish line in Nome.

A natural question to a Latter-day Saint after any feat of endurance is whether the Word of Wisdom helped him achieve his goal.  “I don’t know if I was any stronger,” Jeff said, “but I had a mindset that was different from the other competitors.  I don’t want to say this in an arrogant way, but I was everyone’s cheerleader because I was always happy.  I had the energy I needed.  Mentally, physically – yes I was strong.  My mind was clear.  When I was outside of Ophir [during the windstorm] I knew exactly what I was doing because I had taught from the time I was eight years old.

“I can name every single one of my leaders,” he continued.  “Barbara Hogan was my Cubmaster; Sister Baird was my Blazer leader. Charles Sudweeks was my Scoutmaster.  It goes on.  The things those people taught me – all of it came into play.  I have a newfound fear of the wind, but even in that situation I knew exactly what I was doing.”

“The scripture that comes to mind the most is Mosiah 2:41 – consider on the blessed and happy state of those that keep the commandments of God.  It’s not always easy, and running that race is just exactly like life.  There are good parts, there are bad parts, there are big huge ugly storms, there’s the day, there’s the night.  Sometimes it’s tough, but in the end you look back and it’s all worth it.” 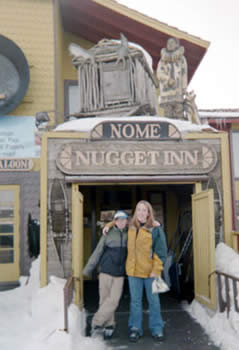 Jeff and his team crossed the finish line after 13 days, 22 hours, 35 minutes, and 16 seconds.  He finished the race at the 59th slot – not bad for a man who wasn’t trying to win.  “When I crossed under the Burled Arch in Nome I still had 13 of the original 16 dogs, making my team one of the three largest teams still left in the race.  I feel we accomplished just what we set out to do.” 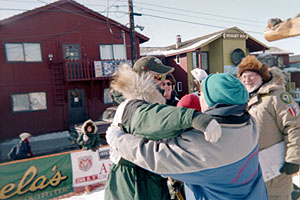 Jeff gets a hug from wife Gaynel at finish line.