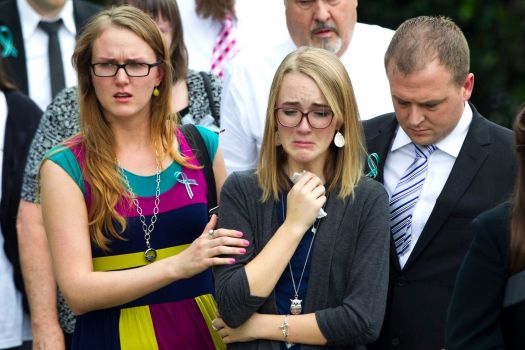 Cassidy Stay, center, the only survivor of the family massacre, leaves with other mourners after services for her parents and four siblings

Roger Lyon’s voice caught for a moment as he prayed at his daughter’s funeral in front of a crowd of more than a thousand people Wednesday afternoon.

Her white casket, along with five others bearing the bodies of her husband and four of their children, lay in a line before him, stretching almost the entire width of the sanctuary inside the Mormon chapel on Hafer Road.

“Please bless us that we might know of the good that has come out of, and will come out of this seemingly senseless tragedy,” he said.

Church officials said about 1,500 people attended the funeral for the six members of the Stay family, shot to death at their Spring home last week. Cassidy Stay, the couple’s eldest daughter, was also shot, but survived by playing dead. She called authorities, who eventually cornered the alleged shooter in a nearby suburban cul-de-sac.

Stay, released from the hospital on Friday, sat with her grandparents just a few feet from the caskets as church bishop Scott McBride addressed her loss.

“We feel pain and the sting of loss of friends and family. We miss the Stays,” he said, standing in front of five oversized black-and-white portraits, smiling images of Stephen and Katie, 39 and 34, and their dead children, Bryan, 13, Emily, 9, Rebecca, 6, and Zach, 4. 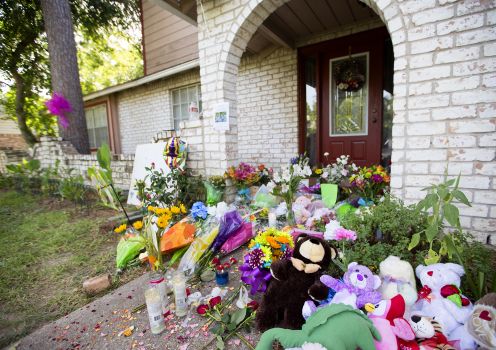 The family died July 9, after a man who recently had been divorced from Katie Stay’s sister arrived at the home, demanding to know where she was. Authorities say Ronald Lee Haskell, 33, then shot and killed the Stays and the four younger children, before heading to Roger Lyon’s home a few miles away. Authorities intercepted him before he arrived, and arrested him hours later after a standoff.