BYU to present the United States Debut of Musical

The following are excerpts from an article on Playbill.com. To see the original article, click here.

The show premiered at Switzerland’s Theater St. Gallen in 2009 and has subsequently enjoyed a professional life in Europe, Korea and Japan. The BYU workshop marks the musical’s first production in the United States and will feature a cast of students from the university’s BFA musical theatre and acting programs.” 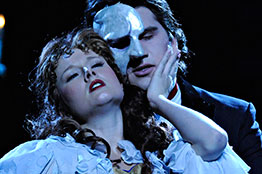 This isn’t the first time BYU has been at the forefront of new musical theatre opportunities. After the rights for The Phantom of the Opera became available for non-professional groups in 2013, BYU became one of the first universities in the United States to tackle the production.

Frank Wildhorn said that he wanted to establish The Count of Monte Cristo in Europe and Asia before bringing it to the States. Now that he’s done that, it felt like the right time to move forward with American audiences. He says his great relationship with BYU makes him excited to see what will happen next.

The excerpts above are taken from an article on Playbill.com, to see the full article, click here.