Surviving the typhoon: Fear, faith and miracles for 10 LDS sister missionaries trapped in the Philippines

Editor’s Note: The following is an article published in the Deseret News that we thought should not be missed. 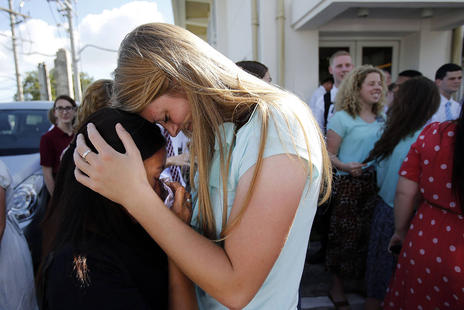 In the darkness of early morning, Amanda Smith moved away from the window to shield her face from the slashing rain. She had shut it just moments before to ward off the raging storm whipping through the palm trees outside.

But now the wind had ripped it open, and the wooden shutters were slamming violently against the wall again and again. Sister Smith, an LDS missionary from Elk Ridge, Utah, couldn’t see anything outside, but she could smell the sea, which seemed to be getting closer and closer. They had to get out of here.

She had heard about the storm three days before, from a driver of a pedicab. It was typhoon season, and tropical storms were common in the Philippines. Still, the last storm warning had produced nothing but blue skies. Some of the missionaries wondered if this time would be any different.”

To read the remainder of the article on the Deseret News, click here.