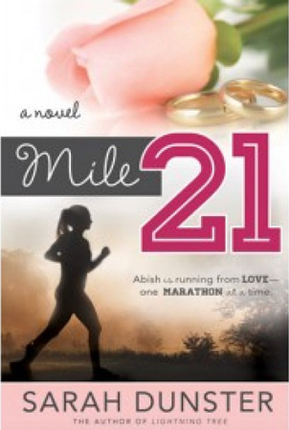 Mile 21 by Sarah Dunster takes the reader on an emotional rollercoaster ride. Early in the story I learned that Abish Cavendish Miller is a runner and I found the book title odd since a marathon is slightly over twenty-six miles, not twenty-one. However, as I thought of the different stages of a long run compared to the stages of grief, healing, and faith experienced by Abish, the title began to make sense.

Abish is twenty-one, a young widow who lost her husband, Mark, a year earlier. Compounding her hurt and loss is the still birth of her baby three weeks after her husband’s death. Hit by a pulmonary aneurism while playing ball at BYU-I, Mark ran toward her and collapsed at her feet. The look on his face as though pleading for her to save him haunts her, partly because of the lifelong teasing she has taken over her name . . . Abish, the Book of Mormon woman who raised a king and queen from their death-like sleep.

Abish isn’t adjusting well to life without Mark. She is supposed to be taking care of some apartments her mother owns in exchange for reduced rent on one, but isn’t doing it well. The early morning arrival of the cable guy, Bob, who catches her in skimpy pajamas eventually leads to her mother evicting her. Refusing to return to her parents’ home or to live with her aunt, she returns to her work place on campus and crawls under her desk. Her discovery leads to a disastrous confrontation with her boss, whom she soon learns is also her bishop.

She ends up back in single student housing and feels completely out of place. At every turn she feels in conflict with her roommates, her parents, her bishop/boss, and even Bob the cable guy who turns out to be the ward executive secretary. Bob is fighting his own emotional battles following a divorce and his sudden switch to being a single dad raising two toddlers.

Abish is a deeply conflicted character. The loss of her husband has not only dumped a load of grief on her shoulders, but in her struggle to deal with her loss, she has alienated her family, cut herself off from friends except for a scruffy young man who does little other than play electronic games and chase girls, and she is left to try to make sense of her once strong faith in the Gospel. She’s a bluntly honest, often tactless young woman who challenges the patience of those around her and she often makes foolish choices through being oblivious to other people, time, and her surroundings. She wants answers to questions about her future; since she’s already sealed to Mark, how can she date, marry, have children in this life or is she supposed to remain alone for the next eighty or so years? Lessons on eternal marriage in her singles ward only increase her pain. Running seems to be her only release. She sets a goal to complete a plan she and Mark had established–to run the Ogden marathon. No matter how hard she tries she can’t seem to get past that dreadful sixteen to twenty mile mark in her practice runs.

The other characters, though not drawn with as much depth as Abish, are fully fleshed and realistic. Most are neither all good or all bad. I would have liked to know more about Bob, however. One of Dunster’s strongest points in this story is her ability to draw the reader into such close identification with the characters that she/he feels the character’s emotions.

The background, the college town of Rexburg in Idaho, is well done and brought back a lot of memories for me. I remember some of those icy winter mornings all too well, along with the mixed bag of relationships that comes with living with half a dozen roommates.

The story has a nice pace very similar to that experienced in a long distance run that I suspect other runners will recognize. It’s a little different than the arc usually associated with fiction, but works very well. This definitely isn’t a preachy sermon type of book; there’s some humor, some romance to this story, but it’s primarily a journey of personal faith.

Sarah Dunster is a wife, mother to seven, and an award-winning author of fiction and poetry. This is her second novel, and she is perhaps best known for her poetry which has been published in many of the prominent LDS magazines.