From fantasy to realism, these picture books will enthrall and teach the reader about these gigantic beasts of old. Some of the books are so fun and funny that kids will likely laugh out loud. All of the books are good for ages 3 to 7 and are a perfect nighttime treat for bedtime. 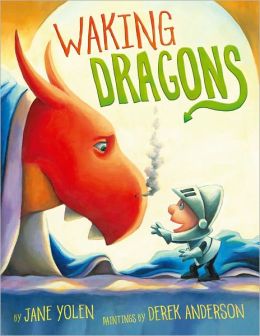 Waking Dragons, by Jane Yolen, and vividly painted with acrylic by Derek Anderson, goes through the morning ritual to prepare dragons for the day. A young knight fixes “breakfast waffles, topped with syrup, which makes dragons / really cheer up.” After brushing their large teeth and dressing them, off they all fly with the youngster atop one of them as they head to his “Knight School.” The rhyming text, along with the jovial pictures, will surely fire up enthusiasm for rereads.

Oh No, Little Dragon!, by Jim Averbeck, takes a small, bluish dragon creating all kinds of shapes with his fire until it’s squelched while taking his bath. His antics throughout are a delight as his mother reassures him that she “could never stop” loving him. The simplicity of the layout and text makes for a perfectly enjoyable and quick read. 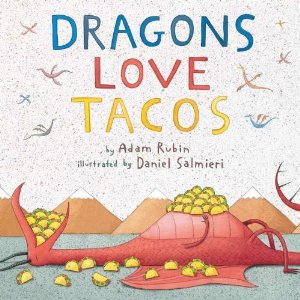 Dragons Love Tacos, by Adam Rubin, and illustrated with great humor and color by Daniel Salmieri, is a fun story that centers on how much dragons enjoy tacos – any type and size of tacos. However, if you desire to have them attend your party, don’t give them spicy salsa as you won’t like the results of their bodily reactions! The pictures are a delight and were made with colored pencil, watercolor and gouache.

Flight of the Last Dragon, by Robert Burleigh, and beautifully painted with acrylic by Mary GrandPre, is a richly told story in poetic fashion with beautiful hues of blues, purples and greens throughout. Ultimon is a sad and forlorn dragon who is the last one on earth. He begs to be placed in the sky stars and ultimately receives his place in the constellation and is known as Draco.

Dinosaur Zoom!, by Penny Dale, has many concepts to learn in this fun and brightly colored book. Ten different kinds of dinosaurs are driving up the mountain from the desert. The concepts learned here are colors, geography and dinosaur types – to name just a few. The text is large and sparse making it easier reading for the younger set. Also, many onomatopoeia sounds are found throughout.

Chick-o-Saurus Rex, by Lenore and Daniel Jennewein, takes a small chicken and makes him a hero. Little Chick wants to become part of the tree house club, along with three of his animal friends. But they tell him that only the brave and mighty can belong. He ends up scaring off a hungry wolf by using a dinosaur bone. The digitized pictures, along with Little Chick’s adventure, will be read and read again. Check out the paleontology information found at the back of the book. 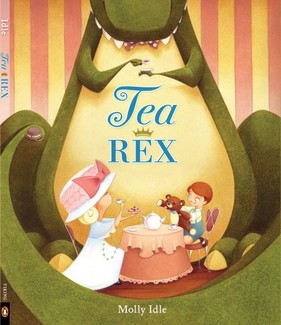 Tea Rex, by Molly Idle, is actually a sweet and simple guide to etiquette and manners. A young girl and boy invite a very large dinosaur to tea and must teach a few niceties to this large prehistoric animal. The pictures are a pure delight with a backdrop of pink and yellow stripes throughout. The actions of the training are hilarious. But the best part is the reader will actually learn some nice manners. The book begins and ends with a gracious note of invitation and thanks (which is how we all should begin and end our invites).

The Triceratops Tuff, by Stephen Shaskan, takes the traditional story of the Three Billy Goats Gruff and replaces them all with dinosaurs. The three dinosaurs who clip clop across are the triceratops brothers beginning with the smallest one. And who’s living under the bridge? T-Rex of course. Kids of all ages will enjoy this book! 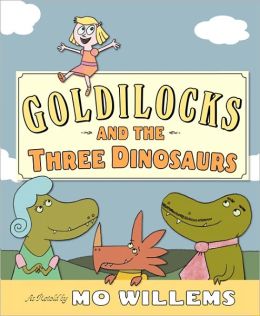 Goldilocks and the Three Dinosaurs, by Mo Willems, is somewhat like the original story about the three bears but these dinosaurs set the stage for poor Goldilocks and await their trap. But when Goldilocks comes in to find yummy chocolate pudding of varying temperatures, chairs positioned and beds made, she begins to sample all. This tale, told by award winning Willems, is full of innuendoes and humor!

Gus, the Dinosaur Bus, by Julia Liu, and painted with watercolor and pencil by Bei Lynn, is a clever tale about how a dinosaur served as a school bus until the principal made him stop. He was knocking down traffic lights and tangling up telephone wires. So the principal made him go to the school gym where his tears of sadness became a swimming pool. Now Gus has a new job serving as a playground where he uses his long neck as a slide.

Here are two wonderful non-fiction books that kids of all ages will enjoy and learn from: Scholastic Discover More-Dinosaur and Disney Learning – Wonderful World of Dinosaurs

How and where can I order your children's books posted here?