Does God Watch the Super Bowl? 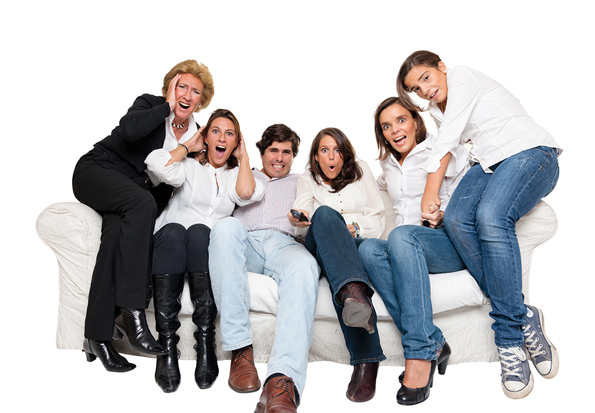 Just when you think the world can’t possibly get any crazier, it does. My husband just sent me an email and wrote in the subject line, “Winner! Winner! Most Stupid Story Award!” Sure enough, it was an article by Cathy Lynn Grossman in USA TODAY on Tuesday, announcing that nearly a third of Americans think God will choose who wins the Super Bowl.

The Sports Illustrated cover story this week asks, “Does God care who wins the Super Bowl?” And a new survey of more than a thousand people, from the Public Religion Research Institute, says 27% of us believe He already knows whether the Ravens or the 49ers will prevail. This notion seems to follow religious lines, which explains why 36% of Southerners say He’ll play a role in who wins, and 15% of Westerners are in agreement.

Have we all had so many concussions that we’ve lost our minds? I mean, head injuries have been in the news lately, so maybe that explains it. But it still makes the rest of us scratch those same injured heads and sputter, “Are you kidding me?” With all the turmoil and suffering around this world and who knows how many others, do some people really think God takes a break from all that, puts his feet up, and pulls the strings for his favorite team? Does he even care about the outcome of any ball game, no matter how many prayers are uttered on each side?

I can just picture it- Ministering Angels dash in with trays of Celestial Nachos and Buffalo Angel Wings. Next come the Sliders (into Heaven), Halo Onion Rings, and kegs of rootbeer. It looks like a Dr. Seuss book, doesn’t it?

Patrick Willis of the 49ers says, “Before each game, all week, as I do every day, I pray about 10 prayers a game. And what I always end it with is, Lord, let your will be done today.”

It’s hard to fault a man for praying, but seriously, do you think God really has a will when it comes to ball games? I can see praying for safety or praying that you’ll do your best, but praying for the outcome? Would you do this sitting around your dining table before playing a board game? What about before playing a computer game? Or before playing tennis with your buddy? How about scribbling in a Sudoku pad on an airplane? Have we completely forgotten that these are all just games? Do we really believe God cares if you win a game of Apples to Apples? And just because a whole bunch of people watch, does that now give it more importance than any other game or form of recreation?

I know a man who prays his thanks to God before he plays football, for the ability to do it, for being an athlete. He’s grateful to engage in something that fulfills him. And I can see praying with that kind of gratitude. But believing God cares about-and will control-who wins the Sabbath Super Bowl seems a sacrilege to me. Are these the priorities he wants us to have, the things he wants us to pray for?

The article went on to say that more than half of Americans also think God will reward those players and coaches who make a public display of thanking God-that these guys will receive “good health and success.” I can see having a private, sacred moment with God to thank him for helping you in any endeavor; when we reach a goal (not a goal line) with His help, it’s appropriate to acknowledge His hand in our lives. And praying for help as we play a sport and then thanking him that we didn’t get our block knocked off, is appropriate. But believing that he’s invested in Sunday’s game-remember, SUNDAY’S game-just makes me shake my head and wish those helmets offered just a tad more protection.

Her latest three novels, “JUNGLE,” “SISTERS IN THE MIX,” and “PINHOLES INTO HEAVEN” are all available on Kindle at amazon.com/author/jonihilton and at www.mormonbooksandauthors.com.

Hilton has written 20 books, three award-winning plays, and is a frequent public speaker and a former TV talk show host. She is also the author of the “As the Ward Turns” series, “The Ten-Cow Wives’ Club,” and “The Power of Prayer.” Hilton is a frequent writer for “Music & The Spoken Word,” many national magazines. She is married to TV personality Bob Hilton, is the mother of four, and currently serves as Relief Society President in her ward in northern California. She can be reached at her website, jonihilton.com, Twitter:@JoniHilton, and Facebook: Joni Hilton.

Amen, Joni!! I've been saying that for years!