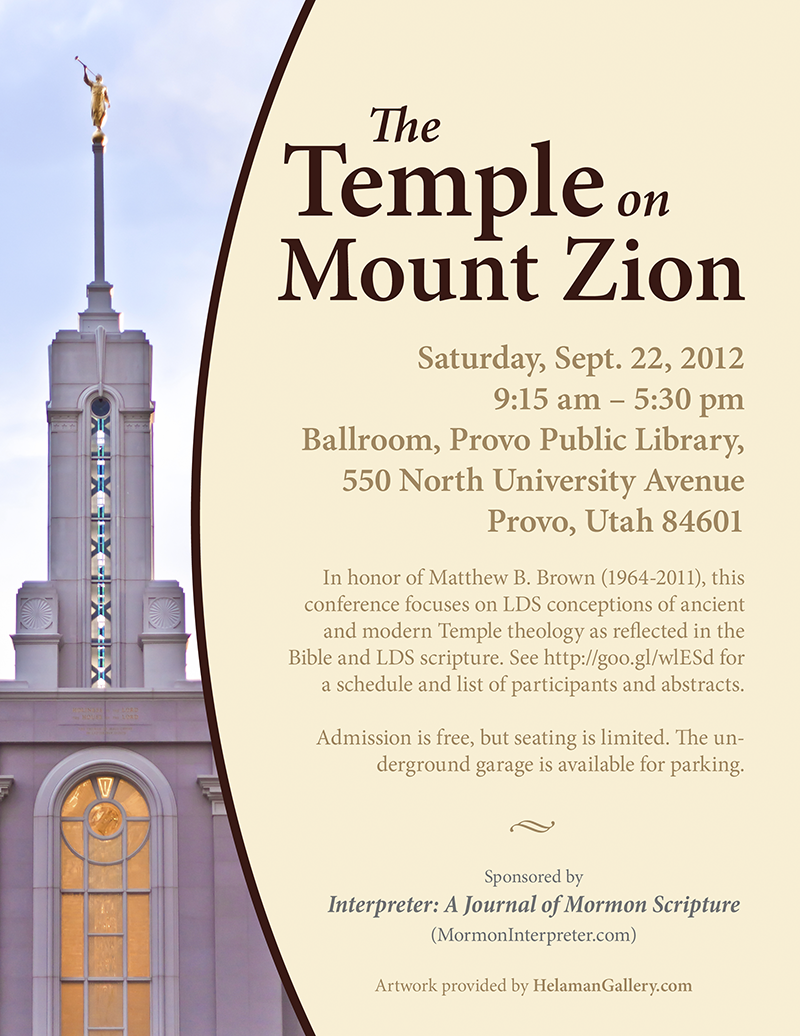 “The Temple on Mount Zion Conference” will be held at the Provo Public Library on 22 September 2012.

This conference was originally organized by Matthew Brown before his untimely passing.  The conference focuses on LDS conceptions of ancient and modern Temple theology as reflected in the Bible and LDS scripture.

Admission to the conference is free, but seating is limited to about 300.  During the lunch hour you can bring a bag lunch to eat in conference room, or visit some of the restaurants around Center St. and University Ave, a few blocks south of the library.  The underground garage at the library is available for parking, but cars must be out at 6 pm.

Creation as Model for Adam and Eve as Co-Creators. The creation stories in the scriptures contain many links with temple theology and ritual. Within these links we explore how these narratives describe God as creator, and the essential elements of how he creates. In particular we explore how God created Adam and Eve and gave them the responsibility of both caring for his creation as well as becoming, primarily through procreation, co-creators with God by following the model that he gave them as creator.

It has long been recognized that the story of Noah recapitulates the stories of the Creation, the Garden, and the Fall of Adam and Eve. What has been generally under appreciated by modern scholarship, however, is the nature and depth of the relationship between these stories and the liturgy and layout of temples, not only in Israel but also throughout the ancient Near East. And this relationship goes two ways. Not only have accounts of primeval history been included as a significant part of ancient temple worship, but also, in striking abundance, themes echoing temple architecture, furnishings, ritual, and covenants have been deeply woven into the scripture stories themselves. To the extent that the biblical accounts of the Creation, the Garden, and the Fall are re-played in the story of Noah, one might expect similar temple themes to recur.

The best known copy of the so-called “Book of the Temple” is the bandeau inscription from the Edfu temple. It compares well with the book of Exodus in the Bible, providing both a historical prologue and a detailed description of the temple. The Edfu inscription provides valuable insight since it is actually engraven on the temple it describes and thus enables a comparison between the ideal temple and the real one. The intent of this paper, however, is to discuss the parallels in the two accounts, in outline and form and thus highlight some facets of the temple in the ancient Near East.

A handclasp exchanged between God and his human servant is mentioned in at least ten biblical passages (possibly more, depending on interpretation). This gesture has been understood in various ways: as a means of assumption into eternal life, as an induction into the divine council, as part of a coronation ritual, as a figurative reference to divine aid, or as some combination of these. Divine handclasps are also depicted in ancient Near Eastern art, including that of Egypt. In this paper, I propose a reconstruction of the gesture’s form based on details described in the biblical passages and on connections with iconographic sources. I then explore how an understanding of the gesture’s form impacts the interpretation of the passages in which the gesture is mentioned.

Abstract: In response to questions arising within God, Job, described as blameless and

upright, is thrust from idyllic circumstances into a dark realm of bitter experience. Three “friends” unwittingly press Satan’s case, attempting to convince Job to admit guilt. Job, however, holds on, searching for God’s face and progressing toward a transformed understanding of God and man, which is brought to strongest expression in four great revelatory insights received by Job. Finally, Job commits himself to God and man with selfimprecating oaths. After withstanding a final challenge from Elihu/Satan, Job speaks with God at the veil and enters God’s presence. Many points of contact with the temple support the thesis that the book of Job is a literary analogue of the endowment ritual.

“From Dust to Exalted Crown: Royal and Temple Themes Common to the Psalms and the Dead Sea Scrolls “

Those Psalms designated by scholars as “royal” have often been interpreted messianically and eschatologically, and are often understood to be associated with the cult of the ancient Israelite temple. Quotations from, allusions to, and themes drawn from the Royal Psalms ca Temple Mount Zion Conference, Abstracts 3 Aug 17, 12 be found abundantly among some of the texts recovered from the Qumran library. Many of the non-canonical psalms and similar literature that have been discovered, including the Hodayot (Thanksgiving Hymns), clearly draw on the Royal Psalms and emphasize what we may recognize as “temple” themes drawing on Psalms 18 and 89.

In this paper, I will seek to demonstrate that the Qumran authors placed themselves and their community in the place of the royal figure of these biblical Psalms and envisioned for themselves the deliverance and  royal temple cult.
11. 2:30-2:55 PM, Stephen D.Ricks
“Psalm 23 and the Terrible Questions'”

Psalm 23, famed as “The Lord Is My Shepherd” psalm, deals well with life’s “terrible questions”: where do I come from? (treated in Psalm 23:1-3); why am I here? (reflected on in Psalm 23:6a); and where am I going after this life? (dealt with in Psalm 23:6b). Psalm 23 may also be compared with Lehi’s dream in 1 Nephi 8 and 11 and the Hymn of the Pearl, both of which reflect on the origin, purpose, and final goal of life. I look at each of these texts as reflections on the “terrible questions” of life.

“Holiness to the Lord: Biblical Temple Imagery in the Sermons of Jacob the Priest”

Towards the beginning of the Nephite record, Nephi informs his readers that he built a temple “after the manner of the temple of Solomon” (2 Nephi 5:16). Years later, the righteous king Benjamin gathered together his people at the temple on the occasion of his final sermon (Mosiah 2:6); similarly, when in fulfillment of prophetic expectation, the resurrected Christ visited the Nephites, the Book of Mormon reports that he did so at the temple in Bountiful (3 Nephi 11:1). Hence, notwithstanding the lack of details explicating the nature of Nephite temple rituals, clearly these sacred centers fulfilled an important religious role in Nephite society. While the Book of Mormon itself contains very few details on the nature of Nephite temple worship, when its sermons are read through the lens of ancient Israelite temple motifs, many of these discourses can be shown to rely upon biblical temple themes as part of their conceptual background. This observation proves especially true in the teachings of the Book of Mormon prophet Jacob, a man consecrated to fulfill the role of a priest.

“Axes Mundi: A Comparative Analysis of Nephite and Mesoamerican Temple and Ritual Complexes”

This study seeks to compare and contrast the temple and ritual complexes alluded to in the Book of Mormon with those known from the archaeological record in Mesoamerica. Although superficially they may appear incompatible, an analysis of their underlying mythologies reveals many conceptual similarities, suggesting Nephite worship and ritual might not have been wholly out of place in that context. There are significant differences as well, but these likewise serve to provide insight into the interrelationship between the Nephites and the dominant Mesoamerican culture within which they may have been entrenched.

Although the “Day of Provocation” is an extremely important metaphor in latter-day scripture, yet it has not been adequately reviewed in its context of priesthood ordinances. I analyze the usage of Rest of D&C 84: 23-25 against its original Numbers 14 setting, the watershed event at the end of Israel’s first year from Egyptian captivity. Moses’ own endowment experiences, what he thereby intended for freed Israel at the Sinai temple site, and, in turn, what he desired to restore in the promised land of peace and prosperity, creates a harmony across the five books of Moses.

Anciently, temples were regarded as places of revelation where the heavens and earth meet. They were also places where sacred rites were performed. The first of these functions was restored at the Kirtland Temple, a building designed basically for general meetings. Sacred priesthood ordinances were then restored at Nauvoo where the temple included a font in the basement and facilities for other ordinances on the attic level. The Logan Temple was the first to include separate rooms with murals on the walls depicting various stages in our eternal progress as taught in the endowment. Located at Church Headquarters, the Salt Lake Temple also included rooms for the use of the General Authorities. During the early twentieth century, temples omitted the earlier large assembly rooms, so their facilities were focused specifically on temple ordinances. During the second half of the twentieth century, new audio-visual means were used in presenting the endowment; this made it possible to accomplish this in one place rather than in a series of rooms. At the end of the century, President Gordon B. Hinckley directed the construction of much smaller temples around the world; though significantly smaller in size than most earlier temples, they retained the same higher standards of construction that had characterized larger temples over the years.

Throughout these developments, temples have been designed to accommodate their sacred functions as effectively and efficiently as possible.