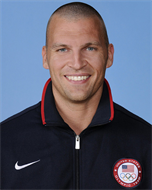 Lambourne competes in his second Olympics, after helping the U.S. men’s team win gold at the 2008 Beijing Games, where he was the team’s lone libero. Lambourne has been a mainstay at libero for the national team since 2005. He made his world championships debut in 2006, where he finished as the fifth-ranked libero. Lambourne was fourth among all liberos at the 2007 World Cup and was named Best Libero of the 2007 World League.
As a libero, Lambourne is the defensive specialist who wears a different colored jersey and isn’t allowed to attack at the net. But in high school and college he was an outside hitter. He would prefer to play that position on the U.S. team, but appreciates his role despite admitting to “some boredom” in the position. Lambourne played collegiately at Brigham Young University, where he started at outside hitter on the 1999 NCAA national championship team, the first national title for the school. He majored in Japanese while at BYU.

Originally a baseball player, Lambourne picked up the game of volleyball because he wanted to hang out with his friends. And he was tall, so the volleyball coach in high school loved having him. Lambourne thought about returning to baseball his sophomore year, but his baseball coach seemed uninterested about having him back, whereas the volleyball coach made him feel wanted because of his height. His father actually wanted him to play baseball. 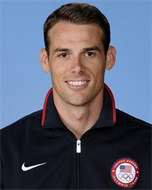 Middle blocker Russell Holmes is no stranger to London. He served his mission there! This is his first Olympics. He joined the U.S. national team in 2009, but began playing a more significant role in 2010, when he ranked as the squad’s fifth-leading scorer for the year.
Holmes attended Brigham Young University and watched the team win the national championship as he red-shirted his freshman year. He became a part-time starter the next season, but flourished as a sophomore, earning All-American Second Team honors. Holmes was named to the same team as a junior, but improved to the All-American First Team as a senior in 2008. He graduated with a degree in sociology.
Born and raised in Orange County, Calif., where the U.S. national teams now train, Holmes grew up as a soccer player. As a 6-foot-8 high school junior in volleyball-mad southern California, he was urged by friends to try the sport. Soon thereafter, Holmes realized he could have more of a future in volleyball, so he dropped soccer, but his first sport has helped with his coordination and footwork in volleyball. The son of Mark and Tamara Holmes, Russell has a younger brother, Dane, and an older sister, Leah. He and his wife, Julie, have a daughter, Sadie Rae, who was born in 2007. An Eagle Scout, Holmes also enjoys surfing and snowboarding.

The United States men’s volleyball team beat Tunisia 3-0 in their preliminary round match, but lost to Italy 0-3 in the quarterfinals. 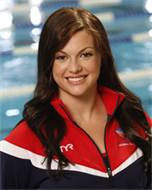 Mary Killman of Oklahoma and Texas, was named the USA Synchro Athlete of the Year for the 2010 and 2011 seasons.

She was first paired with current national team duet partner Maria Koroleva for the 2011 Pan American Games in Guadalajara, Mexico. Despite only having a month and half to prepare, the duo placed second behind Canada for the silver medal.
Killman and Koroleva are not only duet partners for the U.S. national team but also roommates at home and on the road during competitions.
Killman is the only member of the U.S. Synchronized Swimming team not to attend college. She chose instead to focus on her lifelong dream of pursuing synchronized swimming at the Olympics.

Originally a competitor in racing events, Killman began to participate in synchronized swimming competitions at the age of 11, and at age 15 gave up racing to focus exclusively on synchronized swimming. Killman was homeschooled since the second grade. Her father was a project manager for cell phone tower companies and would be away for large stretches of time. The self-proclaimed “biggest daddy’s girl” didn’t like being away from her father so the family would go along on the business trips.

Killman and Koroleva finished in eleventh place in London.