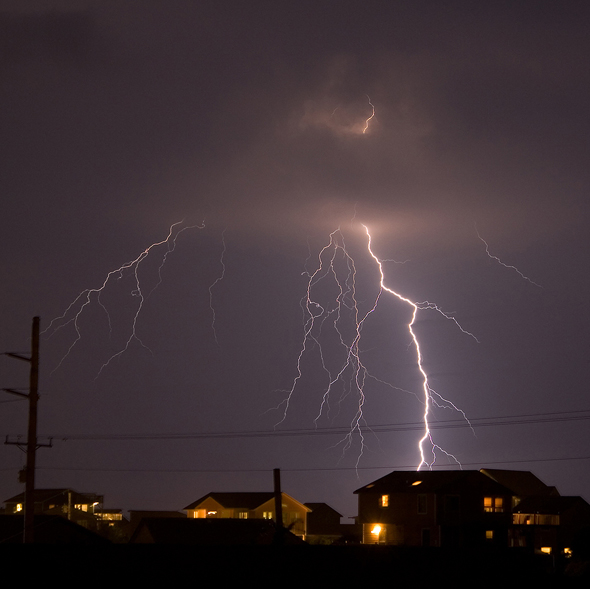 As an Amateur Radio first responder one of the things I have been trained to do is to act as a weather spotter for NOAA. This training has reminded me how very, very dangerous lightning is and how aware we need to be to avoid the dangers. As NOAA says,” When Thunder Roars Go Indoors”.

Lightning is fascinating to watch but also extremely dangerous. In the United States, there are about 25 million lightning flashes every year. Each of those 25 million flashes is a potential killer. While lightning fatalities have decreased over the past 30 years, lightning continues to be one of the top three storm-related killers in the United States. Lightning injures many more people than it kills and leaves some victims with life-long health problems.

Understanding the dangers of lightning is important so that you can get to a safe place when thunderstorms threaten. If you hear thunder, even a distance,you are already in danger of becoming a lightning victim.

All thunderstorms go through stages of growth, development, electrification, and dissipation. Thunderstorms often begin to develop early in the day as the sun heats the air near the ground causing pockets of warmer air to rise. Cumulus clouds start to form. Heating causes these clouds to grow vertically into the atmosphere. These “towering cumulus” clouds may be one of the first signs of a developing thunderstorm. The final stage of development occurs as the top of the cloud becomes anvil-shaped. If you see an anvil shaped cloud thunderstorms are possible and you need to be aware and prepared.

There is no safe place outside when thunderstorms are in the area. If you hear thunder, you are likely within striking distance of the storm. Just remember, When Thunder Roars, Go Indoors! Too many people wait far too long to get to a safe place when thunderstorms approach. Most of us have had the experience of being at a baseball game or a picnic and hearing thunder in the distance. Do we immediately leave? We should.

Unfortunately, delaying action has led to many lightning deaths.

The best way to protect yourself from lightning is to avoid the threat. You simply don’t want to be caught outside in a storm. Create a lightning safety plan and discuss it with your family. Cancel or move activities indoors when thunderstorms are expected.

Concrete picnic shelters with open sides are not a good option. Vehicles with other than hard tops are not safe. Other unsafe vehicles include golf carts, convertibles, and motorcycles. Unsafe buildings include car ports, open garages, covered patios, beach pavilions, golf shelters, tents of any kinds, baseball dugouts, sheds and greenhouses.

A safe shelter from lightning is either a building or a enclosed metal vehicle. A safe building is one that is fully enclosed with a roof, walls and floor, and has plumbing or wiring. Examples include a home, school, church, hotel, office building or shopping center. Inside a building, stay away from showers, sinks, bath tubs, televisions, radios, corded telephones, appliances, and computers.

A safe vehicle is any fully enclosed metal-topped vehicle such as a hard-topped car, minivan, bus, truck, etc. While inside a safe vehicle, do not use electronic devices such as cell phones and radios during a thunderstorm.

If you drive into a thunderstorm, slow down and use extra caution. If possible, pull off the road into a safe area. Do not leave the vehicle during a thunderstorm.

If someone is struck by lightning, they need immediate medical attention. Lightning victims are safe to touch. Call 911 and monitor the victim. If necessary start CPR and continue until help arrives.

Take lightning safety seriously and teach your family the warning signs and what to do. If you feel tinging or your hair standing on edge, run, you are about to be struck. Take photos from inside a safe building no matter how tempting it is to stand outdoors. Each year there are as many deaths from lightening as there are from hurricanes. Never take chances. In addition to deaths there are also 1,800 injured. Over 90% of the survivors of lightning strikes end up divorcing because of the mental problems caused by brain injuries when electricity passes through the body. Lightening is very dangerous don’t discount the threat.