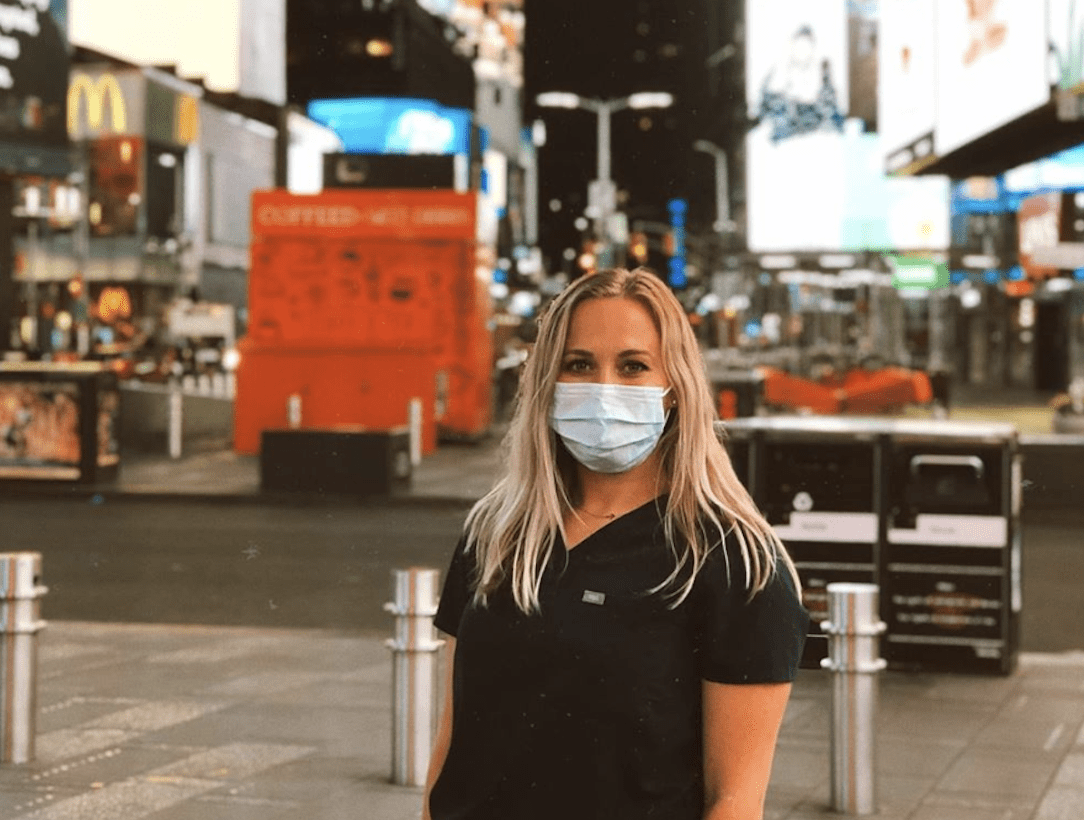 All stories shared in this article are shared at the consent of the patients.

An eerie stillness filled New York City, with the occasional high-pitched twang of sirens in the distance. Where once the rhythm of the city was marked by busy shuffling and cars protesting in traffic jams, there is now only the rhythm of traffic lights turning red, yellow and green, signaling to no one. The signs in Time Square still cast a spotlight on the empty sidewalks below, but instead of advertising clothing stores and Broadway shows, many project words like, “We’ll get through this together.”

Yet, rounding the corner from blocks and blocks of abandoned streets plastered with warning signs about COVID-19 you can find epicenters of movement—hospitals that have now become ground zero in fighting the pandemic so rapidly spreading in New York. At any time, nurses and doctors can be seen coming in and out, fire trucks parked outside and patients entering the ER, wondering if they will ever leave.

Carly Olson entered the hospital her first day, not knowing what heart rending and eye-opening experiences she would have working in the ICU before her three weeks of volunteering as a nurse were up. At the nurses’ station, she opened a pack provided by the government with a surgical gown, N-95 face mask, face shield and foot coverings and suited up to enter a “hot zone” where you could not enter without protective gear.

Her hot zone was in an abandoned part of the hospital—the old ER—where they set up a makeshift ICU. Equipment was old and faulty, and this is where those sickest with COVID-19 were sent. This ward once left lifeless like the streets of New York now are was buzzing with activity, bringing Navy doctors and nurses from all over the country to fill in for the ¾ of the original hospital staff who were sick with COVID-19 and not able to work. Hospital cleaning staff were out sick, too, leaving no one to clean up blood on the floor.

This was not the Utah hospital Carly usually found herself in, and she couldn’t even allow herself to think how many more resources she would have to save people’s lives had they fallen sick in Utah. She was in New York, the epicenter of the virus, and her fight was from hour to hour to keep the young and old alive. “I was often up and giving patients compressions,” Carly said.  “Your want to save the person overcomes your fear of getting the virus.”

During her 12-hour night shifts, she ran back and forth from the pharmacy a couple hundred yards down the hall in the newer part of the hospital to get medicine for her patients. Since most were intubated to help them breathe, her patients also required a cocktail of pain medication and paralyzing agents so they wouldn’t wake up in fear and rip the tube from their lungs. This was what she did night after night, hoping any of her patients would live until her next shift.

“There were no nights off till I got home. It was such a good night when I saw the same patients on my next shift because I knew they were still fighting the fight. But, sadly, most of the time I was with a new set of patients who were just beginning to fight,” Carly said. Seeing those empty beds when she came in for her shift was heart rending.

In her first week, there were 26 patients in her ICU unit and only 3 hadn’t died by the end of the week. One of those three was a woman who became especially important to Carly—a symbol that she was making a difference even with so much death around her. A mother of 9 and grandmother of 14, she was fighting every day to be able to walk out of the hospital and go home to her family.

One of the biggest struggles Carly immediately noticed in her patients was not only a struggle to breathe but a struggle to feel any sense of hope. They were alone, isolated from family and loved ones, and it seemed that entering the ICU was a death sentence. It was so rare for anyone to be extubated (getting the tube removed from their lungs) and able to breathe on their own that whenever it happened, the song “New York, New York” was played over the loud speakers for all to hear.

Carly made it her top priority after taking care of medical needs to help patients feel a sense of hope and love. An ICU iPad became everyone’s lifeline to the outside world as Carly and other nurses made sure each patient could FaceTime with their families at least once a day. Even the non-religious began to pray together, sing gospel music and talk about God over FaceTime in their last moments. With even the ability to be physically with their families taken away, they clung to the idea of God, hoping in those last labored breaths, they were going somewhere more peaceful.

With her patient who was a mother of 9, FaceTime and phone calls became especially poignant. After two weeks, this patient was supposed to be released but suddenly took a turn for the worse and had to be intubated. Seeing her patient’s setback and a couple other young people die, Carly wondered why she was even there. It was so heartbreaking. She was missing her baby’s 1st birthday. So many were calling nurses on the frontlines heroes, but she felt like she wasn’t saving anybody.

The patient’s husband and family had no idea whether she was dead or alive until Carly called to tell them she was still fighting. On that call he asked, “Where are you from?” “Utah,” Carly said. “I have been praying and praying for a nurse from another state because I knew if they were willing to leave their families and sacrifice to be here, they would do everything possible to save my wife’s life.”

Carly then knew why she felt so strongly she was supposed to go to New York and why she was missing her husband and baby to be there in the epicenter of the crisis. This mother of 9 needed her, and she was going to do everything she could to help her live.

Now that she knew her patient was Christian, Carly played gospel music for her every day and FaceTimed her patient’s husband in to pray for her twice a day. In her patient’s room she put up signs of encouragement that said, “KEEP FIGHTING,” and “YOU ARE STRONG”. Her patient couldn’t talk with tubes down her throat, but her eyes communicated her love and gratitude. She and Carly, two women from very different backgrounds and circumstances and who would have never met outside of these trying circumstances, had a forever bond. “We grew up so differently, and now we are best friends,” Carly said.

From her FaceTime calls with her patient’s husband, she learned her patient was the caretaker of a son who had been shot and was now wheelchair-bound in a chair that hardly worked. She also took care of many of her little grandchildren. Though the abandoned hospital wing was dismal and people were dying all around her, this patient had an extraordinary will to live. She had people to take care of at home and a nurse that loved her fiercely. Carly’s sister, hearing about this special patient, raised money to buy the patient’s son a new wheel chair, groceries for the family and baby clothes for her grandchildren.

Carly extended her volunteering for another week, giving her 28 days and 360 hours of work in the New York hospital, spending all the energy she had to cheer and fight for her patients, including her sweet mother of 9 who is still in the hospital today fighting for a full recovery.

Before leaving New York, Carly left the hot zone of the ICU, and went out to the parking lot of the hospital where her patient’s husband stood. He also had COVID-19, but recovered from it quickly. As their eyes met for the first time in person, he took Carly’s hand and said a prayer for her, thanking Heavenly Father for her sacrifice.

Her patient had been extubated a week before, and in their last moments together she could quietly speak and sing to the nurse that had sung to her and told her it was going to be ok all along.

It’s so wonderful to hear this woman’s wonderful story, especially when news is so bleak these days. You lifted me. Oh, and I was a Red Cross disaster nurse back in the day, so hearing this story reminded me of many life changing memories. Thanks!

I don't mean this comment to diminish the valuable contributions made by nurses who traveled to NYC for COVID staffing. My own daughter left her Salt Lake City hospital for three grueling weeks of 12 hour shifts in an all-COVID Bronx hospital and she, too, gave her heart and soul to her patients. However, to call this work volunteering is a stretch. These nurses were paid at a minimum $10,000 a week (yes, ten thousand dollars a week, and some specialties even more) for three weeks, plus roughly another $3600 a week for two additional weeks of quarantine back home afterwards. Plus a free room at a nice hotel, free transport to/from work, and $90 per day for food. Many nurses wanted these jobs and some made literally thousands of phone calls in vain hoping to secure a spot. Many who went to NYC eagerly extended their duty additional weeks because financially speaking, it was the gig of a lifetime. So let's not liken this to, say, going to Iraq. Yes, it was emotionally draining and physically demanding, but it was also extraordinarily well paying. That's not what one customarily thinks of as "volunteering," and particularly not when many others were involuntarily thrown out of work and desperately worried about making ends meet. So please, a little balance here...