U.S. Muslims Concerned About Their Place in Society, but Continue to Believe in the American Dream | Meridian Magazine 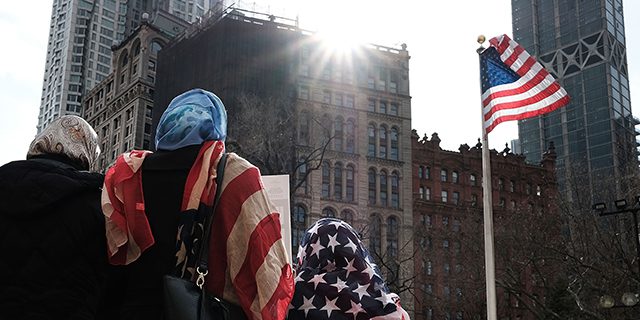 U.S. Muslims Concerned About Their Place in Society, but Continue to Believe in the American Dream

WASHINGTON, D.C. (July 26, 2017) – The early days of Donald Trump’s presidency have been an anxious time for many Muslim Americans, according to a new Pew Research Center survey. Overall, Muslims in the U.S. perceive a lot of discrimination against their religious group, are leery of President Donald Trump and think their fellow citizens do not see Islam as part of mainstream American society.

At the same time, however, Muslim Americans express a persistent streak of optimism and positive feelings. Overwhelmingly, they say they are proud to be Americans, believe that hard work generally brings success in this country and are satisfied with the way things are going in their own lives – even if they are not satisfied with the direction of the country as a whole.

Indeed, nearly two-thirds of Muslim Americans say they are dissatisfied with the way things are going in the U.S. today. And about three-quarters say President Trump is unfriendly toward Muslims in America. On both of these counts, Muslim opinion has undergone a stark reversal since 2011, when Barack Obama was president, at which point most Muslims thought the country was headed in the right direction and viewed the president as friendly toward them.

In addition, half of Muslim Americans say it has become harder to be Muslim in the U.S. in recent years. And 48% say they have experienced at least one incident of discrimination in the past 12 months.

But alongside these reports of discrimination, a similar – and growing  – share (49%) of Muslim Americans say someone has expressed support for them because of their religion in the past year. And 55% think Americans in general are friendly toward U.S. Muslims, compared with just 14% who say they are unfriendly.

Despite the concerns and perceived challenges they face, roughly nine-in-ten Muslims say they are both proud to be American and proud to be Muslim. Fully eight-in-ten say they are satisfied with the way things are going in their lives. And a large majority of U.S. Muslims continue to profess faith in the American dream, with 70% saying that most people who want to get ahead can make it in America if they are willing to work hard.

These are among the key findings of Pew Research Center’s new survey of U.S. Muslims, conducted Jan. 23 to May 2, 2017, on landlines and cellphones, among a representative sample of 1,001 Muslim adults living in the United States. This is the third time Pew Research Center has conducted a comprehensive survey of U.S. Muslims. The Center’s initial survey of Muslim Americans was conducted in 2007; the second survey took place in 2011.

To read the full report on the Pew Forum, click here.

Why should proctioneers of a political system ( Islam/Sharia) worry about their place in our s0ociety. 1. Islime calls for the overthrow of all forms of government that are not Sharia/ Islamic. It calls for the killing of all Jews and kaffir( yes you are cattle if you are not muslime). I would worry also about the society around them suddenly waking up and deciding to eliminate islime from the world as a danger to mankind and free worship