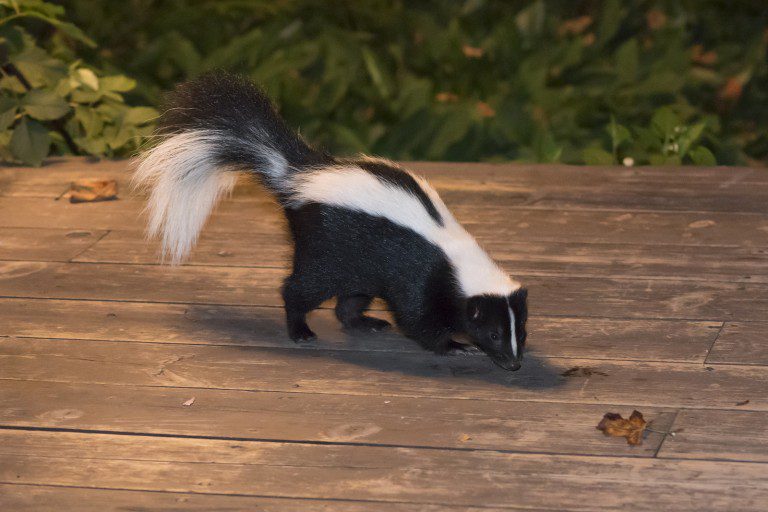 What does a person do with the skin of a skunk? Well, Rick decided that it might make a piece to use for a practical joke. He placed it on his doorstep, and he loved to watch people do a double take when they came to his door. Some people would see it from a distance and not even come to his door. Rick saw that as a definite plus. Rick thought fewer interruptions in life was always good.

Another advantage was it kept door-to-door salesmen away. But it also kept away people that his family did want to visit, so he decided to hide it somewhat under a bench that was there. That meant most people were almost on top of it before they saw it. Some people would stumble and fall backward, almost tumbling off of the steps before they realized it was not alive. But it made it so people at least got close enough to know it would not get them.

Rick had a lot of fun watching out his window and seeing how people reacted, but he had to admit that he had almost taken a backward tumble once or twice himself. He was the one that put it there, but there were times when he had come to his own door while deep in thought, only to be startled into the present by the black and white fur sticking out from under the bench.

There was another advantage that Rick had found. Even though the skunk skin had long ago lost any scent it may have carried to human senses, it tended to deter wild animals from coming near. Rick found that he could put his cats’ food bowl on the doorstep near the skunk skin, and wild animals didn’t come around as much to eat the cat food.

Of course, at first, even his cats tended to shy away. But after some time, his own cats got used to it. He could put out some food, and his cats would come running. He was spending about half as much on cat food as before, and his cats were still fatter.

Word got around the community about the skunk skin, and soon everyone knew about it, People talked about it and joked about it. Still, even knowing it was there and that it was not alive, people approached Rick’s door cautiously.

“Why do you keep that old thing around?” Rick’s wife asked him one day.

“Give me one good reason not to,” Rick said.

His wife’s reasons were nonfunctional—things like the skin was old and ugly.

“Do you want me to bring it into the house to wash it and spruce it up?” Rick asked

His wife said it would be the last conscious thing he ever did if she found that in her bathroom. And so they compromised with Rick keeping it on the porch and never bringing it into the house.

Rick had had the skunk skin for over a year, and people in the community had quit talking about it. It was old news now. It didn’t even catch Rick’s attention anymore, even when he was deep in thought. He didn’t even notice it was there.

But then one day, the word around the community was that the skunk skin was gone. No one knew for sure that it was, and no one knew why. But someone had heard something had happened. At church the next day, curious community members watched for Rick to come so they could find out the details. But Rick didn’t come to church. However, his wife and children did, so people gathered around to hear the tale.

“Well, Rick came home yesterday,” his wife said, “and he walked up on the porch as usual. Nothing seemed out of the ordinary to him until, suddenly, the skunk skin turned its back end toward him and put its tail in the air.”

That was when Rick realized there was one animal that a skunk skin didn’t scare away from eating out of the cat dish—another skunk.

No one except Rick’s family saw him for a week or two. His wife said, “It was because he was feeling scent-si-tive about the odor-deal he had been through.”

While he has a quirky sort of humor, his wife is actually hilarious!