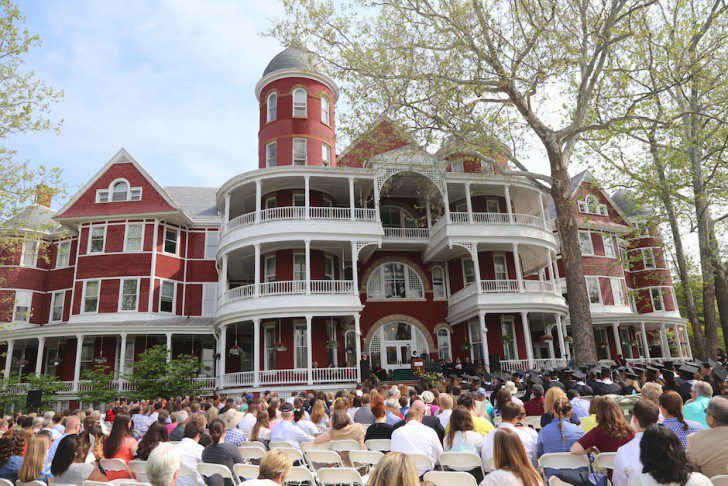 More than 1,000 people gathered on the campus of Southern Virginia University to commemorate the academic achievements of 126 graduating seniors at the university’s 147th Commencement exercises.

Glade M. Knight, chairman of the university’s Board of Trustees, gave an address titled “The Journey” to the crowd of graduates, faculty, students and friends of the university. After having served for nearly two decades as chairman, he plans to step down from his position on July 1, 2015, at which point he will be succeeded by Dr. Dane McBride, current vice-chair of the Board of Trustees.

“You are united. You are Knights,” Chairman Knight said. “And you have more talent and ability than any other group that is gathered together in graduation. I know that. And I’m going to give you some promises of some of the things that you can accomplish.”

In Chairman Knight’s remarks, he told the story of how he first came to be involved with the university in 1996, when he had an experience on campus that led him to work to renew the school as a four-year, coeducational college for Latter-day Saint young adults. At the urging of a friend, Roger Barrus, he visited what was then Southern Virginia College when it was on the brink of closing.

“I came up the hill and as I drove up the hill I felt something special. It’s been mentioned [that it’s] hallowed ground. I felt that,” he said. “I went to the equestrian center. Their very, very famous national coach — they had a nationally recognized equestrian team — was there in a beautiful indoor riding arena. … And a few kids were still riding, and they were sad. … And I left and walked up to what is now the Stoddard [Activities] Center, which was where all the horse stables were and they were immaculate. … And my heart was getting heavy.”

After touring the arena and stables, Knight said that he entered Main Hall through the back door and walked into the Dining Hall. “I stood there and had the most incredible feeling come over me,” he said. “I had never thought anything about a university or being a part of one. An incredible feeling came over me and I knew that that hall would be filled with LDS kids. It was manifest unto me that this is a center for LDS kids. I couldn’t deny it. I knew it. It was a strong impression. I went back to Roger, we went to work [and] within 60 days, without the help of an attorney, we took over the university.”

Chairman Knight’s wife, Kathleen Knight, has also supported the university since 1996, including by annually organizing an Education Conference at the university for the past 18 years.

At the Commencement exercises, Kathleen Knight was recognized “for her many years of devotion to her family, to her church and to Southern Virginia University” with an honorary doctorate of humane letters.

Worthington, who majored in art, told the story of her decision to attend Southern Virginia and said that she and many others feel they “were led to this school.”

“Southern Virginia University is a school full of faculty and staff who believe in the mission of the school, who are passionate about what they do, and who want you to succeed individually,” she said. “We have worked hard to get to this point. … We have done this for ourselves, our loved ones and to prove to our professors that we are grateful they are here. The Southern Virginia classes we have taken have not been easy. We have spent hundreds of hours each semester reading difficult texts, late night studying, writing essays at the last minute and praying for miracles that came often in the form of an extended deadline, a surprise package from home and a kind smile from someone on campus.”

Doxey, who majored in biology and completed the university’s pre-dental track, plans to begin attending the Lake Eerie College of Osteopathic Medicine’s School of Dental Medicine later this year. He discussed the university’s core values — providing examples of members of his graduating class who exemplify those values — and his appreciation for his professors.

Doxey said that the professors at Southern Virginia cared about his academic goals and worked with him to make sure he achieved them.

“I am not aware of anywhere else where immensely overloaded professors spend hours at a time answering questions about the Dental Admissions Test or dental school applications,” he said. “Where else do professors you have never even taken a class from stop you on campus to ask about your graduate school plans or how your soccer game went the night before? While we have all worked extremely hard to graduate today, I know you will all agree with me that we owe our success to the tremendous professors and faculty who have been our biggest fans along the way.”

Salisbury, who majored in theatre and minored in philosophy at Southern Virginia, spoke about the moments in life when individuals need to leave “a state of security and relative comfort” to enter “a state of discomfort and challenge.”

“Coming to [Southern Virginia] was a step into the unknown for many of us,” Salisbury said. “But here we are now, and [Southern Virginia] has become home. It’s become a new place of comfort. Yet, again, the Lord has asked us to step into the unknown. To go out into the wide world. To be uncomfortable. … But it is up to us to be willing to take those chances. Whether the next step is graduate school, starting a business or starting a family, we, the class of 2015, need to be prayerful and fearless if we want to continue to be a light on the hill. We can’t receive the education we have received and hide it under a bushel.”

The Commencement ceremony ended with the traditional performance of “Shenandoah” by the university’s Concert Chorale and alumni.