SCOTUS: Built for the Roe ahead? | Meridian Magazine 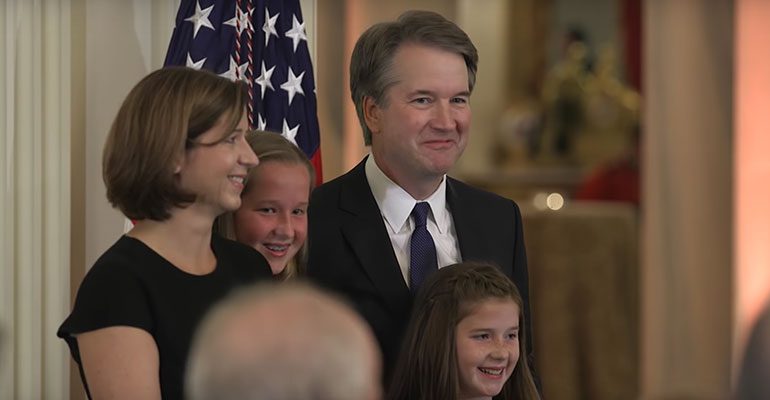 SCOTUS: Built for the Roe ahead?

In the 48 hours since America met Justice Anthony Kennedy’s replacement, most people are probably wondering: is this a debate about the Supreme Court or abortion? You can’t blame them for being confused. In the thousands of articles posted about Brett Kavanaugh since Monday night, it’d be tough to find one that didn’t mention Roe v. Wade. Everyone wants to know: “Will he” or “won’t he” be the vote that finally puts the deadly ruling to rest?

President Trump certainly didn’t leave a lot of people wondering in 2016 when he told “60 Minutes,” “I’m pro-life. The judges will be pro-life.” Two months later, he went to work proving it, sending more nominees to the Senate for confirmation than any commander-in-chief in history. If people had doubts, the confirmation of Neil Gorsuch – and a blockbuster term of Supreme Court wins on life, religious liberty, and free speech – should have put them to rest.

Still, after a year and a half of exceptional judicial picks, some conservatives still seem tentative on Kavanaugh. They point to his 2006 hearings when he told Senate Democrats that he “would faithfully follow Roe v. Wade.” “That would be binding precedent of the court,” he said. “It’s been decided by the Supreme Court. I don’t think it would be appropriate for me to give a personal view.” Comments like that set off a lot of alarms for pro-lifers, who took that as a sign that Kavanaugh wouldn’t have the stomach for overturning court-created abortion “rights.” FRC’s Travis Weber understands how that could send the wrong signal to Americans who are passionate about ending the bloody legacy of Roe v. Wade. But, he explains, Kavanaugh answered that as a candidate for the appellate court, who is generally bound to follow Supreme Court precedent — which, unfortunately, Roe is.

What Kavanaugh pledged was to fulfill the proper role of a lower court judge. Amy Coney Barrett, who a lot of pro-lifers preferred over Kavanaugh, gave a similar answer in her confirmation hearing for a seat on the Seventh Circuit Court last year. Despite her personal beliefs on abortion, she said she would have “no interest in” challenging the Supreme Court precedent for Roe v Wade. As much as she or Brett may object to the ruling (even on constitutional grounds), their job is to defer to the higher courts.

The role of a Supreme Court justice is entirely different. On SCOTUS, Kavanaugh has no obligation to a higher court. His loyalty — and the loyalty of every justice — is to the Constitution itself. Twelve years ago, he gave a generic answer (as most nominees do), so that he didn’t give the appearance of pre-judging a case that wasn’t yet before him. So the fact that Kavanaugh would promise to uphold Roe, Travis points out, “is not necessarily a bad sign, but doesn’t tell us a whole lot either. What we do know is that he has a good originalist philosophy overall.”

The bottom line is this: if we have a Supreme Court that’s in line with the Constitution, the right to life will be protected. The Left knows that as well as anyone. That’s why the president’s opponents are making abortion such a big issue in Kavanaugh’s confirmation fight. With the states passing wave after wave of pro-life laws (401 since 2011!), liberals know that their only hope of preserving the dynasty of abortion on demand is through the courts.

Just think: the last seven years have produced 34 percent of the 1,193 abortion restrictions enacted by states since the 1973 Roe decision. This media drumbeat about the country becoming more “pro-choice” is the definition of fake news. Even yesterday, the president of NARAL Pro-Choice America told reporters that pro-lifers needed to spend money on campaigns like this one because “they don’t have the American people on their side.” She floated a statistic from the Kaiser Family Foundation that insists only 29 percent of the country supports overturning Roe v. Wade.

Not so fast, says researcher Michael New. First of all, he fired back, only 62 percent of America even know Roe has to do with abortion! “Furthermore,” he explains, even the ones that do don’t understand what the ruling did. “Many wrongly think that overturning Roe v. Wade would result in national ban on abortion, instead a reversal of Roe would return the issue to the states.” In all this talk of Roe, we shouldn’t overlook other disastrous rulings like Casey v. Planned Parenthood. That 1992 decision is what stops the government from putting a so-called “undue burden” on a woman’s “right” to abortion.

What’s more, New says, most of this recent polling (including Kaiser’s) doesn’t explain to respondents that Roe v. Wade“effectively legalized abortion on demand for all nine months of pregnancy and makes it difficult to place limits on late-term abortions.” The American people are hugely opposed to second- and third-trimester abortions (28 percent and 13 percent support, respectively). “Both the Gallup and the Pew Research Center found that support for Roe v. Wade was over 60 percent,” New confirms. But, “when the Los Angeles Times described Roe v. Wade as the decision ‘which permits a woman to get an abortion from a doctor at any time’ — support fell to 43 percent.” Those are critical distinctions that make the far-Left’s climb a whole lot steeper on life issues.

For now, the president’s opponents will keep ramping up their attacks on the president’s pick in a desperate attempt to derail him. But at the end of the day, most conservatives are hoping Kavanaugh turns out to be exactly what the Left is worried he is: a strict, no-nonsense originalist that will bring the court back under the Constitution’s control.