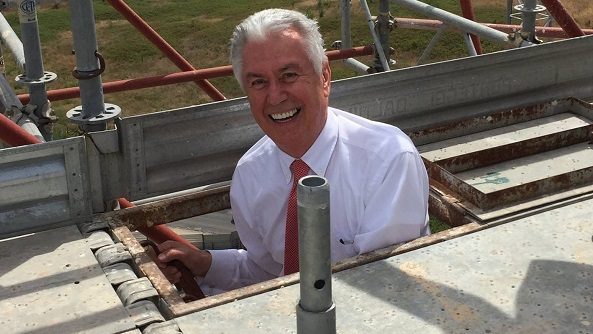 President and Sister Uchtdorf visit site of Rome Italy Temple: ‘It is impressive to see’

“The members in Italy are anxiously awaiting the completion of the House of the Lord,” he said. “Rome and all of Europe will be better because of this temple.”

Work continues to progress on the temple, one of the most watched and talked about building projects underway by the Church.

“For The Church of Jesus Christ of Latter-day Saints in Europe, the Rome Italy Temple has a special significance. For Christianity, Rome has always had an important part in history. In its early days the Apostle Paul taught in Rome. Later Rome became the center of the Roman Catholic Church. Even during the Reformation, Rome’s influence was significant,” said President Uchtdorf. “Now during the time of the Restoration of the Church of Jesus Christ, a temple of the Lord is nearing completion in Rome. We visited the construction site, and it is impressive to see how it is coming along. It will be a magnificent and beautiful temple.”

President Thomas S. Monson announced plans to build the Rome Italy Temple on Oct. 4, 2008. He dedicated the site and broke ground for the temple on Oct. 23, 2010.