Lifting Those with Leprosy | Meridian Magazine 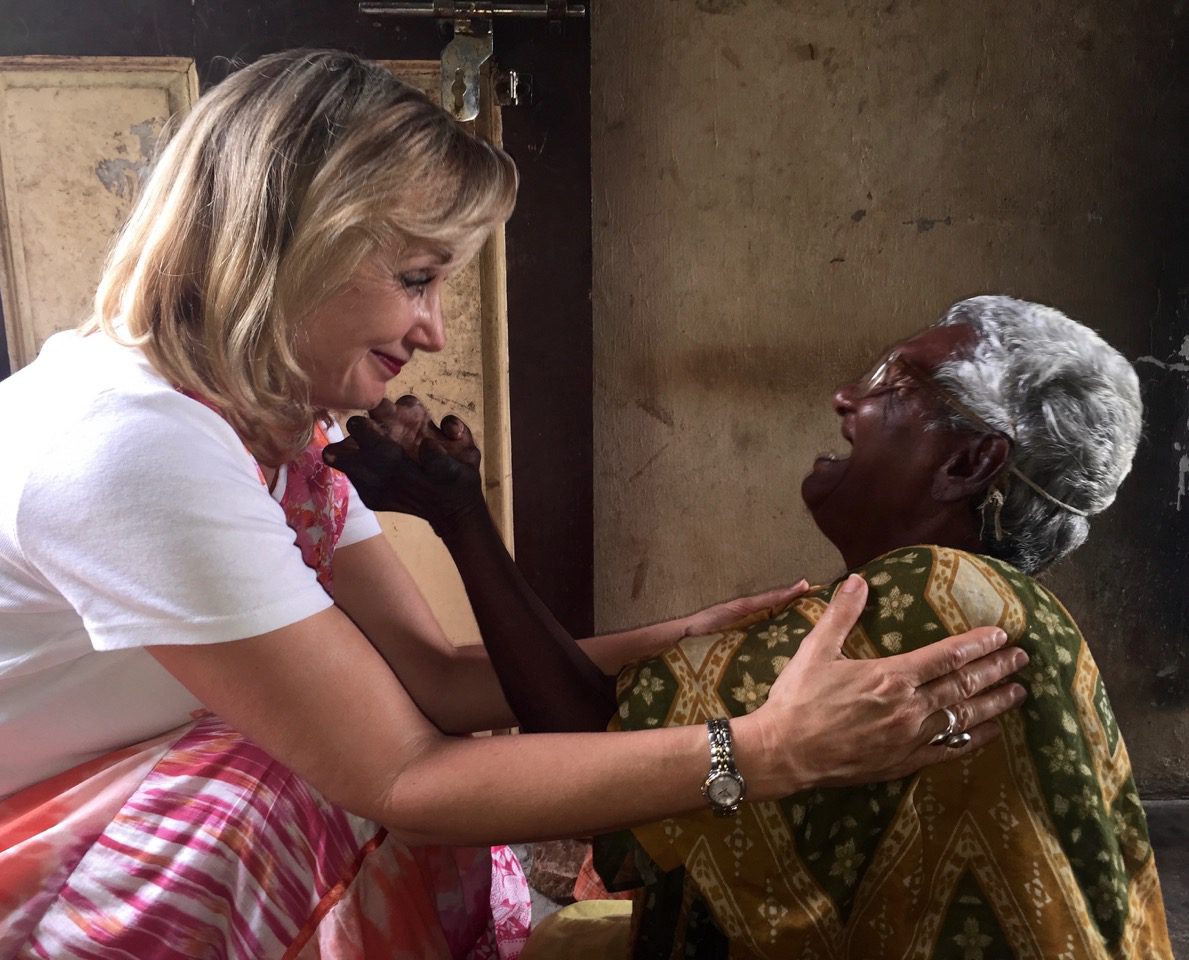 Lifting Those with Leprosy

Rising Star Outreach is a non-profit organization that is striving to reach out to modern-day victims of leprosy. Their mission is to help leprosy colonies in India become thriving, self-sufficient communities rather than places of despair and isolation. The following is an account of how the organization first started. To learn more or see how you can help, click here.

As the mother of ten children, my world seemed filled with endless carpools, school activities, sports teams, dance recitals, swim meets, and church activities. But one day all this came to a crashing stop. My world collapsed around me as I learned that my oldest and beautiful daughter, Amber, had taken her own life.

Amber had been diagnosed as severely bi-polar. For the last seven years, she had been struggling in and out of mental hospitals, but her sickness continued to spiral downward.   We had prayed and fasted desperately over those years that she might be healed, but now the finality of a suicide left me feeling as though my own heart was bleeding.

Amber was in college when she died. When we went through her things we were surprised to learn that she had been sending part of the money we gave her for college each month, to support an orphanage in India. I guess because she suffered so much herself, she had a tender spot for the underdog. She seemed to be constantly reaching out to try to help others.

I felt that if I were going to serve on a Board, I needed to travel to India to see what this organization was doing. I joined a group who was going to visit the orphanage. Seeing the beautiful children in the orphanage was a delight. They were warm and open. They surrounded us with love and acceptance.

Other memories from this trip were more on the traumatic side. It was such a simple thing, but I had come to dread the daily trip by car from our hotel to the Mercy Home, and then back again in the evening.

Every time the car stopped at a stoplight, we were swarmed by beggars who seemed to materialize from behind every other stopped car. Beggars, I could handle. These were not normal beggars. Some of these beggars had no hands, no feet, and had festering open wounds. They crawled or hopped up to the car. Their suffering seemed almost palpable. I withdrew from the window in horror when one man thrust his hand in to beg. There were maggots crawling through his flesh. The stench was indescribable.

“Who are these people?” one passenger in our car cried out. The driver said, wryly, “Oh those are the lepers.” I couldn’t believe my ears. Leprosy? The disease we had read about in Bible Sunday School classes? No—it couldn’t be. I spoke up, “That can’t be right. There’s no leprosy in the world today.” The driver said derisively, “Well, there is in India. We have millions.”

It seemed incomprehensible to me. In this age, how could there be people by the millions, roaming the streets of India with open wounds and rotting limbs? I was totally taken aback.

The first night after I had first seen the leprosy beggars in the streets, I had a hard time sleeping. This problem was gut-wrenching. It was obviously huge. The driver had said, “millions”. Could it possibly be so? How could a society callously allow such needy people to go without treatment? Why wasn’t there a huge outcry and demands for services and treatments?

Finally, I prayed that I would know what I could do to help. I had no medical training. I knew nothing about Indian politics or culture. What could I do? An interesting thought flitted across my consciousness. “They are human beings. You can at least look at them and acknowledge them.” The thought startled me. Had it come from within? Was it an indication of the guilt I had felt in the car, because I had not even been able to look at the beggars? Or was it a message from God? As I thought about this idea, it made sense to me. I probably couldn’t do much to help them. Possibly all I could do was look at them and acknowledge their suffering. It seemed such a small thing in the midst of such unfathomable suffering. But it was all I could come up with. I drifted off to sleep.

I was determined to look at the beggars approaching the car, acknowledge them. Perhaps even smile. But the next day, as the rotting limbs and puss-filled wounds were put up to the car window, I involuntarily recoiled. I felt ashamed. I couldn’t even look at them.

Perhaps on an unconscious level I refused to make eye contact with them, because it almost felt that if I acknowledged their existence, I somehow also acknowledged an obligation to do something. But I couldn’t do anything. I was just an American tourist.

Actually, none of us looked at them. We seemed to have come to an unspoken decision to be vigorously engaged in conversation every time the car stopped. Looking only at each other, we were able to shut out the grisly army of people clamoring for our attention and for a few coins, outside the window.

At first, this approach seemed to be working. Never mind the guilty feeling that crept up the back of my neck when we ignored the beggars. Why should I feel guilty? I asked myself crossly? I didn’t do anything to cause this. This was not my problem. Never-the-less, I couldn’t shake the unsettling sense of guilt.

When I returned from India I couldn’t sleep. Those images haunted me at night. I kept thinking, Why doesn’t somebody do something about this? Then early one morning after another sleepless night I said to myself, You’re somebody. Do something! Or just prepare to have insomnia forever!

In the morning when I got up after a sleepless night, I called three of my friends, who were housewives like me. I invited them to come to a meeting that morning at my home. I called my husband’s office and dragged in my husband’s secretary. We all met around our kitchen table and we formed Rising Star Outreach, to serve the leprosy-affected of India.

Then he asked me the hardest question of all. “What do you think you’re going to do?” I could respond honestly, “I have no idea!” But then I added, “But we’re going to do something! And I know we’re going to need one of those licenses from the government that allows you to take donations without paying taxes. You’re an attorney, can you get us that license?”

He laughed incredulously and said “Becky, that’s called a 501C(3) license, and normally when you ask for one, you have to tell the government what you’re gong to do.” I was feeling pretty foolish by this point, but I was not going to back down. “Great!” I said, “Just tell them we’re gong to do something!” It sounded like a lot of bravado, but inside myself, I wondered if I was just plum crazy!

When we look at the problems of the world around us, oftentimes we are discouraged. We’ve all heard the dictum of Gandhi, who said, “Be the change you want to see in the world.” But instead of feeling empowered, we are more likely to think, “What can I do? I’m only a housewife? Or a student. Or I’m only one person. What can one person do? I don’t have a lot of money or connections or talents in necessary fields.” I’ve often felt this way when I’ve watched news stories about Afghanistan or the Sudan, or Haiti. This experience taught me something I had never imagined. I actually had an inherent power within me. It had nothing to do with education or wealth or influence. But it was a powerful ability to heal. In forty-five minutes I had seen a child respond to something as simple as touch. Gaining this knowledge empowered me to jump into a world where before I would never have believed I could tread.

As impossible as it seems, that’s how Rising Star Outreach was started! Today, through God’s blessings and miracles, we’re working in 54 leprosy colonies in Southern India, serving 29,720 people. We’ve created more than 1,000 businesses for the leprosy-affected, we provide 29,000 medical treatments a year, including life-saving surgeries and reconstructions, and we run a beautiful 16-acre campus where we are educating hundreds of children from the leprosy colonies in one of the finest schools in Southern India. Literally tens of thousands of lives are vastly different now because five women—mostly housewives– met at my kitchen table after a sleepless night.

We do have power to make a difference! Every one of us has the power within us to lift another person who is suffering. But we have to start by looking at them. We have to acknowledge that they are suffering. With God’s guidance and help we can be led to know how to bring comfort into their lives. I have seen this principle working in real life. I know it’s true.

Becky- I loved hearing your story when we were on the "LDS History/Leaf Tour" with the Proctors and now you are sharing your story with so many others. May you continue to bless some of the Lord's most challenged!

What an inspirational story! Thank you so much for sharing this. I certainly feel inspired and motivated by these good women to look for more opportunities to serve.