"I Saw Shots Coming Near Us": LDS Senator in Virginia Shooting Lauded as Hero | Meridian Magazine 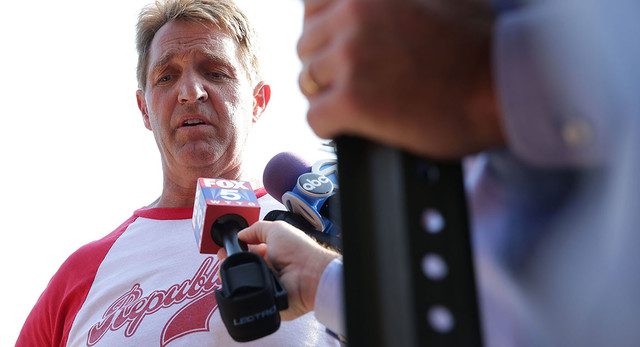 “I Saw Shots Coming Near Us”: LDS Senator in Virginia Shooting Lauded as Hero

A Mormon and Arizona senator,  Jeff Flake, was dubbed “one of the many heroes to emerge” by The Week after the shooting during a congressional baseball practice just outside of Washington, D.C.

Distraught over the outcome of the presidential election, a gunman, James T. Hodgkinson, opened fire on members of the GOP congressional baseball team, leaving House Majority Whip Steve Scalise in critical condition and injuring four others. After exchanging fire with members of Capitol Police security detail, Hodgkinson was wounded and later died.

Sen. Flake was at-bat when the shooting began. “All of a sudden we heard a very loud shot. Everybody thought, that sounds like a gun. The gunman was over by the third-base dugout with a view of the field. A couple more shots and we knew what it was,” Flake told CNN. “I remember seeing some gravel, shots coming near us. We climbed into the dugout and tried to get our own people engaged, some people were calling 911.” Flake could tell the gunman had “a rifle of some sort . . . [and] a lot of ammo,” according to the Associated Press.

This is a most tragic event. It is unfortunate, but as long as US citizens continue to maintain that the right to bear arms is untouchable, these events will continue to happen, over and over, in schools, public venues, etc. Time for the most policed and armed societies in the world to re-examine their collective consciousness.