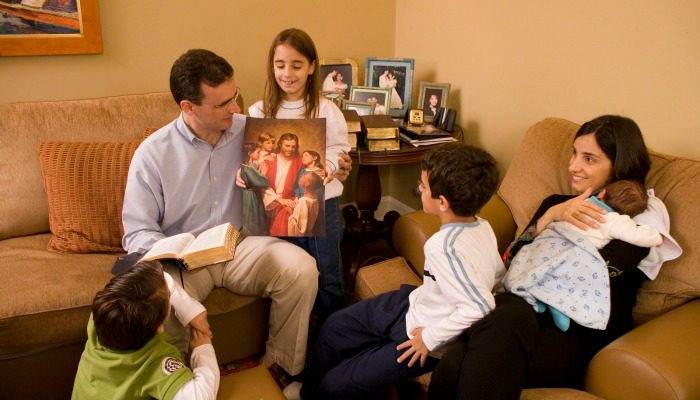 This article was originally written for Huffington Post by Danielle Tumminio. Read the full article at HuffingtonPost.com.

April 27 marks the hundredth anniversary of Family Home Evening, a weekly Mormon event inaugurated by President Joseph F. Smith (not to be confused with founder Joseph Smith; this was his nephew). Once a week since its initiation, Mormon families have come together for prayers, Scripture lessons, songs, games and a snack. The idea is that the night makes families stronger and more faithful in their calling.

Why is this part of the religion? Well, family is central to Mormon theology. Latter-day Saints believe that family is an eternal bond that gets codified in Temple rituals that seal, or join, individuals together for “time and all eternity.” So it’s not unusual for members to talk about their “forever families,” because for Mormons, families literally last forever. As Elaine Anderson Cannon writes, “For Latter-day Saints, the concept of eternal family is more than a firm belief; it governs their way of life. It is the eternal plan of life, stretching from life before through life beyond mortality.”

Indeed, families on earth reflect a divine family: Latter-day Saints believe that they’re spiritual offspring of a Heavenly Father and Mother and existed as spirit children before being born. Here on earth, they come to know each other in the flesh, as they strive together to maintain a relationship with God during the twists and turns of life. At the end of their journey, they will be rewarded with an afterlife where they reunite with family.

Always intrigued by the traditions of others, I wanted to find out how Family Home Evening affected Mormon life:

Could families pull off a civil evening?

Would this be fun?

What would you do on Monday evenings without a local family?

My first stop: the home of Laurie and Gordon Low, a Mormon couple who invited me to dinner. Laurie had volunteered to be my guide as I visited two local Family Home Evenings, or FHEs, for short.

FHEs are a staple of the Low household. The couple has observed FHE since they were newlyweds, though their children are now grown with their own babies. In fact, Laurie kept a journal of their early ones; in neat, now faded script, she recorded the milestones of her and Gordon’s life together.

The birth of a child, an anniversary, the loss of a tooth were all there, part of Monday night.

Laurie had arranged for me to visit two FHEs, one at the residence of a local family and the other at a ward (a local place of worship) where young adults gathered.

Read the full article at HuffingtonPost.com.