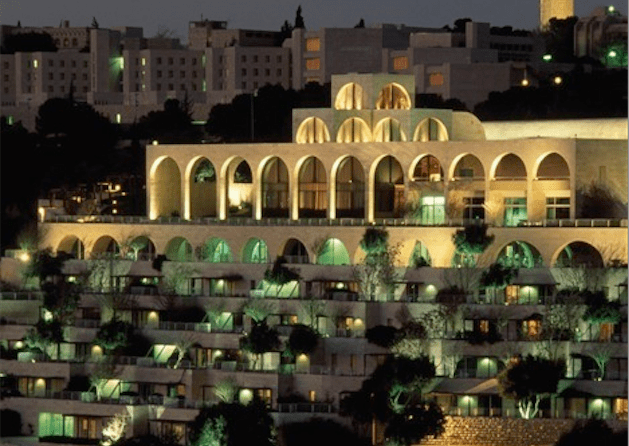 The following was written by Jamie Armstrong. To read the full article, click here.

Thirty years ago, students began moving into the Brigham Young University Jerusalem Center for Near Eastern Studies. Today it is considered by members and nonmembers alike to be a stunning addition to the Holy City’s landscape, but it didn’t start out that way. In fact, plans to build the Jerusalem Center caused so much controversy that the “Mormon issue” nearly caused the collapse of the Israeli government—on more than one occasion.

Located on Mount Scopus, on the northern end of the Mount of Olives, the grace and beauty of the Jerusalem Center is distinctive. With its ingenious use of space and light, and the best natural materials from around the globe, it is an architectural masterpiece that reflects the style of the Near East and makes the most of the spectacular panoramic view of the Old City below.

The beauty and serenity that permeates the Center today is a stark contrast to the events that surrounded the construction process—events which were tumultuous and fraught with opposition at nearly every turn. There were death threats, vandalism, and protest after protest. But even as the Jerusalem Center project grew into an international controversy, there were friends and supporters of many faiths who stood courageously in defense of Brigham Young University’s ambitious and impressive project.

In 1968, BYU began a study abroad program in Israel with just a handful of students renting hotel rooms. But the program quickly grew in popularity, and by 1973 Church and University leaders were considering the possibility of building a school for the students. Meanwhile, a search was underway to find land suitable for constructing a chapel for local members.

Then, on October 24, 1979, en route to the dedication of the Orson Hyde Memorial Garden—a beautifully designed park on the Mount of Olives honoring the Apostle’s visit to the Holy Land in 1841—President Spencer W. Kimball announced plans to build a center in Jerusalem that would not only accommodate BYU’s study abroad program, but would also serve as a multipurpose complex that would include a chapel and a visitors’ center.

Elder Howard W. Hunter and Elder James E. Faust—who had been in charge of searching for land prior to the announcement—were assigned to supervise the Jerusalem Center project along with BYU President Jeffrey R. Holland. They had help from several BYU administrators, including David B. Galbraith, resident director of the study abroad program, who would later become the first executive director of the Center, and D. Kelly Ogden, an administrative assistant for BYU in Jerusalem, who would go on to become the first associate director.

During President Kimball’s 1979 visit to Jerusalem, he was shown a number of possible building sites. But after walking onto a large open field north of the Orson Hyde Memorial Garden, he felt inspired that it was the spot where the Center should be built.

“I knew that site was almost certainly unavailable,” recalls David B. Galbraith. “Sure enough, we were told over and over again by Israelis in real estate and government positions that it was impossible to get that site. Everyone wanted it.” Even the Israeli government was eyeing the same piece of real estate to build the Supreme Court building. “But we remained undeterred,” Galbraith says.

The next year was spent negotiating with Israeli officials, and ultimately the University was granted a 49-year lease for the coveted plot of land with an option to renew. “Certainly it was a miracle that the government would even entertain our desire to build on that site,” Galbraith says. “We’d been told over and over again that it was hopeless.”

Obtaining the lease was a huge victory, but it was just the beginning of a very lengthy process.