There Are Cats in this Book, by Viviane Schwarz, fits the first two components for me to review. This creative book has three lively cats that want you to become involved in their games such as tossing a ball of yarn or lifting flaps to try to find them. You even get a chance to save them as they are swept into a tidal wave of water.  And, if this book isn’t enough fun, there’s a follow-up book, There are NO Cats in this Book, also by Schwartz.  Now the three fun-loving cats wish to leave the book to see the world. There’s more fun here with a fold-out as well as a giant pop-up. Both books have the same brush and ink drawings that splash across the pages with exuberant energy. So what are you waiting for? Go find these active cats! 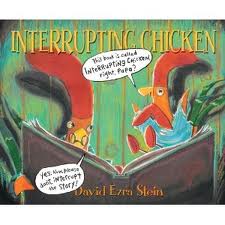 Interrupting Chicken, by David Ezra Stein, is this year’s Caldecott Honor book and its award is richly deserved. It’s time for little red chicken to go to bed and she wants a story.  As Papa begins three different stories, he is constantly interrupted by little red chicken. Finally when she tells him a story, guess who finally falls asleep? There are water-color spreads while Papa and child are the focal pieces. When the stories begin, the colors cleverly change to black and white. Perhaps if your little ones interrupt, this is a tale for them!

Wordless books are great for conversation. Here are four fabulous books that beg for on-lookers to discuss.  Beaver is Lost, by Elisha Cooper, is a clever pencil and watercolor palate about Beaver as he accidentally floats down the river on a log that ends up in a city lumberyard. As you follow Beaver’s adventure, the few words written are the title and “Home” when he finally jumps back in the river to swim home.

Where’s Walrus?, by Stephen Savage, is an off-shoot from “Where’s Waldo” but in a much simpler format.  A walrus escapes from the zoo as a zookeeper is in hot pursuit. Each retro-drawn page has the walrus hiding in plain sight and looking like the surroundings. Check out a shop’s window mannequins wearing red hats along with the walrus who is standing next to them. This book will bring a smile!

The Lion & The Mouse, by Jerry Pinkney, was last year’s Caldecott medal winner. This wordless book takes you through Aesop’s fable but with the majesty of Pinkney’s watercolor Africa. No wonder this book won! 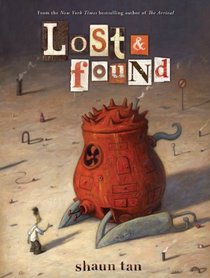 Lost & Found, by Shaun Tan, has a few words throughout and is filled with the most amazing imagery, detail and imagination that you’ll likely find yourself pouring over the book again and again. There are actually three tales that deal with how we lose and then find what really means the most to us. Mr. Tan is a most gifted storyteller through his paintings. This book is good for ages eight to twelve.

The next two books are good for early chapter readers and both have black and white illustrations sprinkled throughout. Zigzag Kids #3:  Flying Feet, by Patricia Reilly Giff, and with illustrations by Alasdair Bright, features innovator Charlie who can’t wait to show off his newly invented flying feet. But what if his shoes don’t work? This fun book invites readers to learn from their mistakes and never give up! 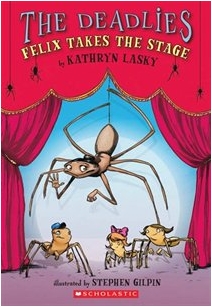 The Deadlies:  Felix Takes the Stage, by Kathryn Lasky, with illustrations by Stephen Gilpin, is a story ultimately about the importance of home. A family of spiders must now move out of Philharmonic Hall after Felix, a most creative spider, makes his presence known to the conductor. Their adventures and mishaps as they travel cross-country in search for a new home will keep you turning pages to the very end.

The rest of the books are good for ages nine to twelve. Framed, by Gordon Korman, is the third installment featuring twelve-year-old Griffin and his gang. But he’s been wrongfully accused of stealing a Super Bowl ring from the display case and now he’s headed to the jail for kids. But he and his gang are about to solve this mystery. The story is hilarious and you just may want to go back to read the other two also featuring Griffin, “Swindle” and “Zoobreak”.

Beyonders:  A World Without Heroes, by Brandon Mull, has thirteen-year-old Jason suddenly being whisked away to a magical world where an evil emperor prevails. This land has no one to overcome this evil lord and Jason, along with Rachel, a girl who has also been transported, needs to fight with the people living there as they try to find their way home. This book looks to be as exciting as his previous bestselling “Fablehaven” series. 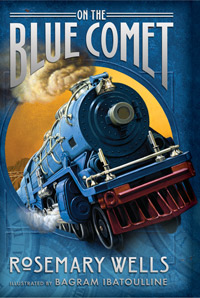 On The Blue Comet, by Rosemary Wells, and with colorfully nostalgic illustrations sprinkled throughout by Bagram Ibatoulline, is the adventure you’ll want to read for summer. This historical fiction has many exciting elements which include time travel and mystery. Eleven-year-old Oscar is about to go on the train ride of his life when he finds that time has moved from one decade to another. You’ll love this read!

Alienated, by David O. Russell and Andrew Auseon, has two friends discovering that aliens are real and now they publish a small weekly newspaper in order to disclose the whereabouts of the aliens. But now they’ve discovered that the aliens they have written about have gone missing. What’s happened to them? Are they hiding deeper on earth or have they been kidnapped by the evil alien overlord? The storyline is riddled with humor and anticipation as the friends finally realize what’s happening to these creatures from outer space. 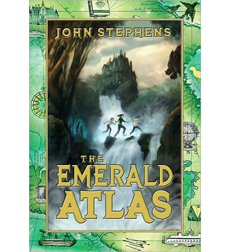 The Emerald Atlas, by John Stephens, is a thrilling new book that evokes magic, adventure and excitement as three siblings are bounced from one orphanage to another until they finally arrive at an excessively large, old house. When they begin exploring the many rooms, they discover a green book that they somehow magically fall into. They are transported back to the recent past where they discover some enchanting and captivating people. The book is overly large, with 417 pages but that’s a good thing. Once you start, you won’t want it to end. But there’s good news: two more books are planned for this trilogy.