This is part one of a two-part series.

Where is the sun? These winter months, with cold, bleak, colorless days put us more at risk for depression. Where does depression come from? Is there a way to avoid it? What contributing factors can be changed and which must be accepted? How much is under our control and how much of it just “happens”? These questions and many more will be addressed in this series.

I am going to be talking less about the “down days” variety of depression, however, and more about major depression—the kind that paralyzes, the kind that robs people of the ability to function well (or at all), the kind that is a major contributing factor to suicide. Education can help us avoid getting on the slippery down-slope that can land us there. Understanding can also give us greater empathy for those who live (or die) in that difficult state of mind.

From the time I was in my 20s I had occasional bouts with depression serious enough to paralyze me for a few hours, or even days. These were times when my limbs felt so heavy I could barely move, when my mind was in a negative fog that kept me from functioning normally. Fortunately, I was not yet suffering from a level of depression I couldn’t pull out of on my own. I often felt I had to function, and I learned many positive practices, such as memorizing scriptures and inspiring thoughts and focusing my mind on them again and again. That simple technique alone sometimes brought me back to mental and spiritual equilibrium.

Later in my life my struggles with depression lasted longer; I desperately searched out and tried many treatments, some effective, some not. Never once, however, have I been suicidal; consequently, I had little ability to understand suicidal ideation or actions. When my son Brian took his own life on September 27, 2004, I was devastated, and a few months later fell into the worst depression I had ever experienced.

Obviously, I didn’t stay there. Since that difficult time I have learned so much, found so many solutions, and continue to experience more and more healing. Ironically, the past year and a half (when I have been spending a good deal of my time on a book of comfort for those who have lost a loved one to suicide) has been the most depression-free time of my adult life. One explanation is that depression is most likely to happen when our pain is greater than our purpose; I’ve felt a compelling and urgent sense of purpose as I’ve been working on After My Son’s Suicide: An LDS Mother Finds Comfort in Christ and Strength to Go On. I knew it could help people and I knew it was sorely needed.

Debbie’s Contribution to My Book

The Lord led me to the right editor for my book; Debbie Bake’s personal experience with major depression and her education in the field perfectly prepared her to be a contributor as well as editor. I have included Debbie’s story in the resource section of my book, and will share it with Meridian readers in Part Two of this series. Only after I read about her experience did I really understand how a person could come to the point where they felt suicide was their only option. Debbie offers information about the tools that aided in her recovery. Her explanations of cognitive behavioral therapy (CBT) and the relative merits of medication can benefit every one of us. CBT, one of the most effective tools for loosening the grip of major depression, is remarkably effective to quell bouts of minor depression, as well as the more serious forms. Her powerful words are sure to add to your level of understanding.

Since her recovery, Debbie has had the opportunity to work professionally as a Behavioral Health Specialist working with suicidal people and their families in a hospital setting. Her experiences there make her story even more meaningful. She helped me understand the complexity of the issues we face when we are trying to understand how our loved one could attempt or complete a suicide. Her explanations of the mindset of those who are depressed to the point of suicidal ideation are instructive and illuminating. To be forewarned is to be forearmed, and this information can give us the ability to manage our own tendencies to depression. It can also help us be a support and help to anyone in the circle of our influence who suffers with major depression.

Debbie also became a volunteer for The National Alliance on Mental Illness, and has had the opportunity to share her story and expertise with church groups and support groups for those dealing with grief from a loved one’s suicide. She said, “People appreciated my knowledge as a Behavioral Health Specialist; however, hearts weren’t touched until I shared my own story of unrelenting, debilitating depression. Only then did they begin to understand how people can get to the point where suicide seems the only option.” I know you will benefit from her story and what she has learned.

Looking at the Contributing Factors to Depression

The area of focus in the remainder of this first article is on understanding the many factors that can contribute to major depression. It is safe to say that it is never just one thing that causes it.

Studying the superb graphic Debbie created (below) will help us recognize patterns and contributing factors. This clear representation of the multiple factors of major depression is of particular interest to those of us who have lost a loved one to suicide because we could also call the graph, “contributing factors which may lead to suicide.” My son Brian had issues in every area listed in the chart below (and so do most of the other people I know who are suicidal). It is also applicable because major depression is the one thing suicide victims are most likely to have in common.

The graph was part of my liberation from stuffed down, miserable, self-denigrating, self-blaming, self-condemning guilt for the “coulda, shoulda, if only syndrome. That kind of guilt (really more clearly defined as shame) is not attached to any specific wrongdoing and not resolved by the recognition of God’s help to repent. I’m talking about feeling guilty over things we have no control over (such as a loved ones’ major depression or suicide) and labeling ourselves a failure because of it.

It is such a temptation to think if I had only done such and such or said such and such, it could have made “the difference.” But studying the many factors involved relieves us of that burden, because we can see that our influence and what we did or did not do was only one small part of the equation contributing to the problem.

Each circle in the graph is intertwined, signifying the inseparable connection between biology, environment, psychology and spirituality. 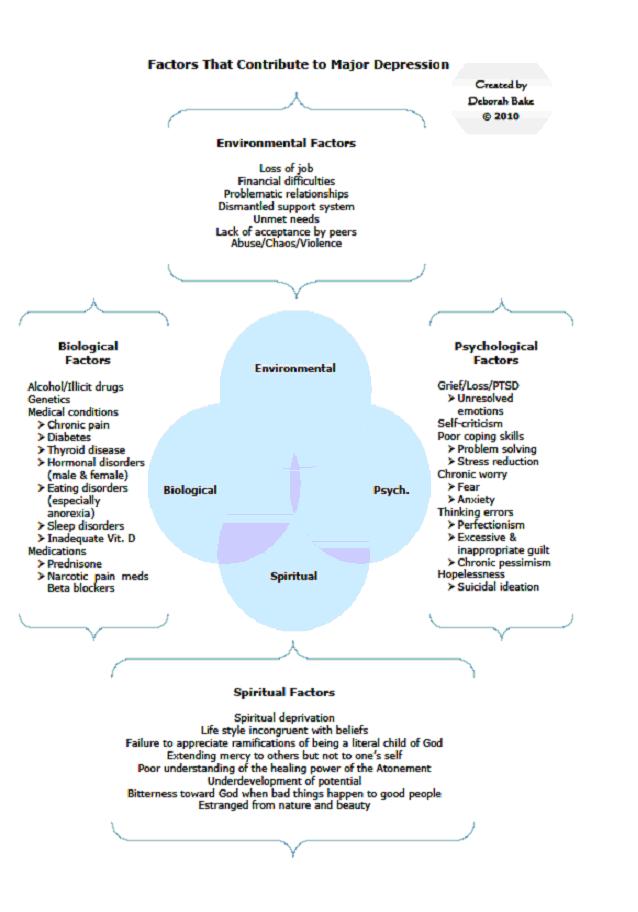 Education concerning contributing factors is helpful because we humans are so inclined to make wrong assumptions when we don’t know the facts. We often grasp for explanations and for something (or someone) to blame. None of us know the thinking ability, coping skills, level of spirituality, situations, or body and brain disorders of anyone else.

That is why judging those who suffer from major depression, and especially those who die by suicide, must be left to God. He is the only one who sees the whole picture, including the intentions of each person’s heart.

When Debbie and I sent the graph and explanation to a trusted LDS counselor, Russ Siegenberg, he added to our understanding of contributing factors with the following response:

Research shows that heredity is a clear factor in depression, so we might conclude that some people have tendencies toward depression. However, other factors such as abuse, trauma, life environment, drug use, physical illness, level of resiliency, religion, and coping skills play significant roles as well. There is some evidence that depressed people have hypofrontality (less energy in the frontal lobe) so that they are less able to think clearly and reason while in a depression, and thus less accountable.

I do think it is reasonable to say that if there were a single, clear biological cause, then medications would help more than they do. Medicine is moderately effective for 1/2 to 2/3 of depressed people, but much less so for the chronically depressed or those with bipolar disorder. False beliefs are also a major culprit (and they, of course, come from the father of lies). I have no doubt that believing false ideas further compromises the sensitive biology of depression-prone individuals. There is no lasting depression without hopelessness. The whole subject is a very complex one

Just as there are many contributing factors to depression, there are many contributing factors to healing from it, and Debbie will discuss many of them. With so many variables, there is one constant. All of us need to learn healthy ways of processing our pain and of challenging our negative thoughts. We need to learn how to live our lives in faith, light, and truth rather than doubt, fear, and negativity. Hopefully this series will help us to do so.

Part 2 of this article will appear tomorrow.

Note: Darla has been a published writer for over three decades and a regular columnist for Meridian since 2001. She is the author of Trust God No Matter What! and After My Son’s Suicide: An LDS Mother Finds Comfort in Christ and Strength to Go on. For more information about Darla and her books visit her website: Darlaisackson.com 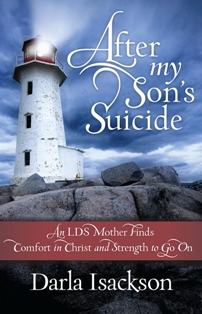