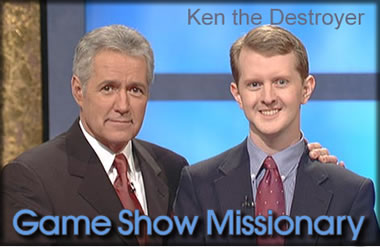 If you have been alive and conscious and living in the USA this week, you know that Ken Jennings, the Mormon Boy Wonder of the game show Jeopardy!, was finally toppled from his throne on Tuesday.  Ken’s 74-game winning streak yielded him $2,520,700 before he was finally stumped by the answer, “Most of this firm’s 70,000 seasonal white-collar employees work only four months a year.”  The correct answer was H&R Block, but Ken guessed Federal Express.

(H&R Block, delighted with the unexpected publicity, has offered Ken a lifetime of free tax preparation.)

Ken’s fifteen minutes of fame are not yet behind him.  As of yesterday, he was so solidly booked on television shows that his own Sony Pictures publicists couldn’t reach him.  Upcoming television appearances are scheduled for weeks, but as of today the Jeopardy! publicists are turning over the care and feeding of Ken Jennings to Ken’s own personal agent.

The hoopla surrounding Ken’s victories is something that the self-effacing winner would probably find amusing.  Even the Jeopardy! publicists who dealt with him for months, and whose very job was to get Ken Jennings’ name into the news as much as they possibly could, were not allowed to say anything about him.

The people who built the Great Wall of China could learn something about wall-building from the people who are protecting Ken Jennings.  Indeed, it would be easier to get an interview with President George W. Bush than it would be to get a quote from Ken the Destroyer.

It would be safe to say that Ken is looking forward to returning to his home in Murray, Utah, and his own wife and family.  Indeed, he said several times before he was dethroned that he was rooting against himself whenever he played.

But if Ken Jennings himself is relieved that the whole thing is over, he cannot be nearly as happy as Ken R. Jennings and his wife Sheila, who also live in Salt Lake City.  Ken R. Jennings has received so many telephone calls for the Jeopardy! champion that his home telephone goes straight to an answering machine where a weary voice gives the name of one of the publicists of the other Ken Jennings before inviting callers for Ken, Sheila or Ryan Jennings to please leave a message.

Jeopardy! ratings went up by more than 20 percent during Ken’s winning streak.  Church members were among the fans who watched him five days a week, although many of them were more interested in seeing how well he represented the Church than they were in seeing what questions he could or couldn’t answer.

Fortunately, Ken never embarrassed the Church with a hard sell, and he never discredited the Church with any thoughtless words or actions.  If the status of being a public Mormon caused pressure for him, he never showed it.  Being a Mormon was as much a part of Ken Jennings as his hair color or his self-deprecating humor.  He wasn’t trying to give out copies of the Book of Mormon to the contestants he left in the dust – and his low-key persona is what made him so effective as an emissary of the Church.

Although Ken may not have gone on Jeopardy! to spread the Gospel, viewers were well aware that he was a member of the LDS Church.  Interviews on the air with host Alex Trebek revealed that Ken’s wife Mindy had used flash cards to teach teetotaler Ken about alcoholic beverages for the popular “Potent Potables” category.  On what turned out to be his last appearance, Ken posed a question in Spanish – something he may have learned for his mission in Spain.

Ken has said he has addressed gospel issues in other ways.  He told Times and Seasons magazine that, “Many press interviews I’ve done have brushed on tithing and the Word of Wisdom, which is about the extent of the Jeopardy! missionary-ing I’ve done. Alex Trebek is surprisingly knowledgeable about the Church, and he and I have had many gospel-themed discussions both on and off camera. And I’ve received a truly astounding amount of mail from Protestants and various other ‘friends of other faiths’ complimenting me on my clean-cut appearance, willingness to tithe, etc., with nary a ‘but you’re going to hell. Your biggest fan, Agnes.’ If nothing else, in some parts of the country, I’m sure it’s good to have a Mormon on TV who evidently doesn’t have horns and ten wives. So, yes, there have been some opportunities, and I’m sure there will be more.”

Ken went on to say that it was a lot harder for him to go home and be famous than it was for him to stand on the set of Jeopardy! and answer questions.

“It is hard to be the momentarily famous guy in an LDS ward,” he said. “It takes me 20 minutes to get from classroom to classroom on Sundays, because of the dozens of friendly ward members who want to ambush me on the way and ask what Alex is like, or whatever. Many well-meaning folks at church have asked me earnestly how I’ve changed or if I still have a testimony, which (beyond being sort of rude) is a little frustrating, since I feel like I’m exactly the same person, while everyone else around me seems to have changed their behavior toward me utterly!

“To be fair, despite all that,” he continued, “church has still changed less for me than, say, going to the office has, or going to the grocery store, and there are still ways in which it’s a comforting respite from the cares of the outside world. But I’m eagerly waiting for the day when all this will die down, leaving me free to do the occasional fireside or something, but not necessarily be “that Jeopardy guy ’24/7.'”

Jeopardy! fans have not seen the end of Ken Jennings.  Jennings fans – and there’s a whole cult of them, if Jennings-related weblogs (or “blogs“) are any indication – fantasize that he will help President Bush end the war in Iraq, and will ultimately make hundreds of millions of dollars pushing Nike sportswear for the “intellectual sportsman.”

But the ultimate Ken Jennings fix is on its way.  Ken himself is writing a book about his reign as Ken the Destroyer.  This book should tell his fans what Alex Trebek is really like, and how he plans to spend whatever is left of his $2.5 million after taxes and tithing.

Just in case any other Latter-day Saints want to try their luck at Jeopardy!, Ken has a secret for his success.  He said, “When Jeopardy! host Alex Trebek finishes talking, that’s when the buzzer activates. You need to have your answer in your mind already. If you are too early, you get locked out. (If you are) too late, you get beat. There is a narrow sweet spot. It is a rhythm, anticipatory move you have to make.”