One Last Boo to You! | Meridian Magazine

One Last Boo to You!

Here is the last collection of Halloween books for the faint of heart. Actually, these are delightful picture books that all ages will surely enjoy. None of these books are scary and some are fun and humorous. So what are you waiting for? Get reading – and enjoy! 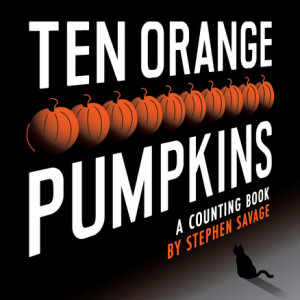 Ten Orange Pumpkins: A Counting Book, by Stephen Savage, is a great way to count backwards from ten to one with pumpkins. It begins with ten pumpkins and upon turning the page you see that one is missing. You also spy a clue as to who took this pumpkin because there’s a straw hat hanging on a fence post. The next page you see a scarecrow with the pumpkin as a head. Each page is a full two-page spread featuring these bright orange pumpkins against black and muted colors of night. There are many exclamations of onomatopoeias by the different pumpkin thieves that fit their characters, such as “Arrrgh” from the pirate skeleton and “Whoosh” from the owl. And the kiddies will be surprised with the last pumpkin on the last page.

Five Little Monkeys: Trick-o-Treat, by Eileen Christelow, is another tale about these mischievous monkeys as they attempt to trick their babysitter, Lulu. You see them going from house to house to receive goodies. But as they come upon other costumed friends, one of the monkeys decides to switch costumes. All five end up switching, but the end trick is on them. The digitally rendered pen, ink and with a blend of colors, showcases Ms. Christelow’s trademark drawings and displays homemade costumes. There’s even an “eye-catching” recipe for edible Eyeball Cookies and Worm Juice found at the back of the book.

Scary, Scary Halloween, by Eve Bunting, and wonderfully illustrated by Jan Brett, is a reissue that was first published back in 1986. This nicely packaged paperback includes a CD of the story. The rhyming tale almost sings off the pages as you begin with a pair of bright green cat eyes peering though the black night. The text reads “I peer outside, there’s something there / That makes me shiver, spikes my hair. / It must be Halloween.” Then you read about skeletons, ghosts and more, but each ends with “It must be Halloween”. 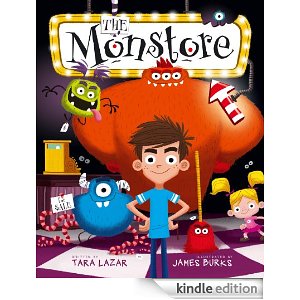 The Monstore, by Tara Lazar, and vividly illustrated by James Burks, begins with a clever opening: “At the back of Frankensweet’s Candy Shoppe, under the last box of sour gum balls, there’s a trapdoor. Knock five times fast, hand over a bag of squirmy worms, and you can crawl inside…The Monstore.” This fantastic story begs to be read out loud and the pictures of the monsters are as unique as the storyline with fish with 5 eyes, aqua one-horned monsters and a very small eyeball with feet. (By the way, this eyeball is found somewhat hidden on almost every page). The story is fun and the pictures are even more fun to enjoy over and over again!

Fly Guy and the Frankenfly, by Tedd Arnold, continues the adventures of the very popular insect geared for new readers. This catchy gold aluminum-style cover features a very large, green Frankenstein-type fly. Buzz and his pet, Fly Guy, have concluded making monster puzzles and masks when he falls asleep. That’s when the nightmare begins. But the next morning, all is well and you’ll likely smile at the end. 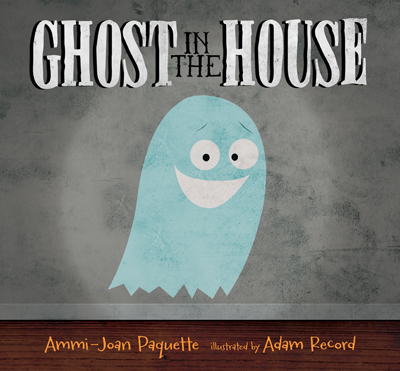 Ghost in the House, by Ammi-Joan Paquette, and illustrated digitally by Adam Record, begins with a black open-page spread and the word: “Boo!” The next page shows the same ghost featured on the cover and the text reads: “There’s a ghost in the house, / In the creepy haunted house, / On this dark, spooky night, all alone.” A couple of pages later you read: “A Groan!” Upon turning the page you find a mummy. The story continues like this with more monsters being revealed with an onomatopoeia clue just before turning the page. The last monster revealed isn’t a monster at all and that will surely bring a giggle to all.

Vampirina Ballerina Hosts a Sleepover, by Anne Marie Pace, and wonderfully illustrated with watercolor and pen-and-ink by LeUyen Pham, has young Vampirina deciding to have a sleepover for her human friends even though she lives in a large dark castle where different-looking creatures lurk. The party is a success and her parents, who love and support her, are willing helpers throughout the evening. Even the food is a success, “For those not eager to sink their teeth into something new, a pizza will do.” The rhyming text makes for a terrific read-out-loud. 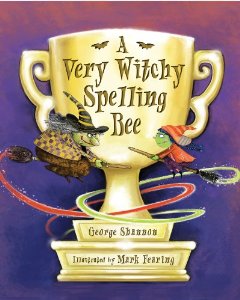 A Very Witchy Spelling Bee, by George Shannon, and illustrated with pencil and then altered digitally by Mark Fearing, is such a fun play on letters that teachers will enjoy the word-play used in the story. It’s time for the annual Witches Double Spelling Bee and the double means that you select a letter out of the pumpkin bowl. Then you transform the letter into something new and also spell that word. With the magic that all participating witches use young Cordelia has to overcome the returning champion who has won over 200 times (she’s quite old). The word-play includes ice turned into mice and lock turning into clock. The drawings of the witches are fun and humorous and connect perfectly with the story.