Apostle Dallin H. Oaks of The Church of Jesus Christ of Latter-day Saints said this week that Church founder Joseph Smith’s most lasting contribution to the world is the insight he received in his capacity as a prophet – including revelations about the importance of the United States Constitution.

Elder Oaks said Smith’s revelations “formed the basis for the philosophy that the [Latter-day] Saints would be asked to follow and that Joseph Smith himself would practice: Use the law to fight injustice; trust in the Constitution.” One of these revelations, contained in the Church’s Doctrine and Covenants, says the U.S. Constitution was established “by the hands of wise men whom [God] raised up unto this very purpose.”

Elder Oaks’s comments were part of a series of events this week in Illinois that explored how courts in the United States have protected minority rights since the 1800s, with Joseph Smith and his three habeas corpus and extradition hearings in the 1840s as the focal point. 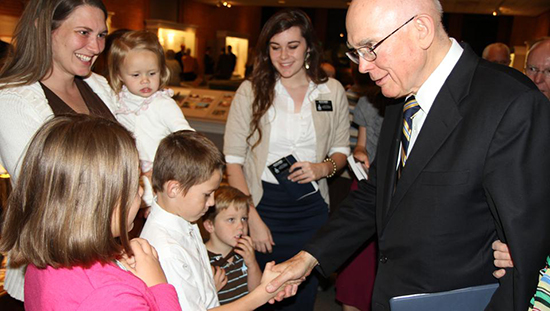 The events, cosponsored by the Abraham Lincoln Presidential Library and Museum and the Illinois Supreme Court Historic Preservation Commission, featured a tour of Nauvoo, Illinois, historic sites and Elder Oaks’s speech on Monday and a Tuesday night reenactment of Smith’s habeas corpus hearings, followed by a panel discussion.

Elder Oaks, a former University of Chicago Law School professor and Utah Supreme Court justice, called the Smith extradition hearings a window “into the world of Joseph Smith” and the “legal world of Illinois in the 1840s.” He said Smith’s “intellectual understanding of the protections afforded by the writ of habeas corpus (a law that determines whether an individual is being detained legally) justifies admiration by any student of the law.”

Smith invoked habeas corpus laws on several occasions, including those featured in Tuesday’s hearing reenactments – circumstances that resulted from his efforts to stop Missouri officials from extraditing him from Illinois. (In all three hearings, Illinois judges protected him by refusing to grant extradition.) It was a time when the young Church struggled to find government redress from persecution because, Elder Oaks said, the U.S. Bill of Rights and its attendant freedoms of religion and speech had not yet been extended to individual states.

In an interview prior to his Monday night speech, Elder Oaks noted that Smith “preached observance of the law, respect for the Constitution and the obligation that each citizen owes to support the law and those who have been elected to administer it. It’s a remarkable history of obedience to law and respect for law by a leader who, along with his people, was sometimes victimized by that law.”

Elder Oaks concluded his comments Monday night saying that in his personal research he has seen Joseph Smith as “a man of the frontier-young, emotional, dynamic and so loved and approachable by his people that they often called him Brother Joseph.'” He added that regardless of one’s views of Smith as a religious leader, most can agree that he was “a remarkable man, a great American and one whom I and millions of our current countrymen honor as a prophet of God.”

The panel discussion that followed Tuesday’s trial reenactment focused on the use of habeas corpus over the last two centuries. The panel was moderated by Gery J. Chico, an attorney and chairman of the Illinois State Board of Education. Panelists included U.S. District Court Judge Sue E. Myerscough of the Central District of Illinois; Michael A. Scodro, solicitor general for Illinois; Jeffrey D. Colman, partner at Jenner & Block in Chicago; and Jeffrey N. Walker of the Joseph Smith Papers project.

The event was the third of its kind. Last year, the Mary Todd Lincoln 1875 insanity commitment hearing was reenacted, and in 2011 the focus was the retrial of alleged Lincoln assassination conspirator Mary Surratt. As was the case with those two trials, this week’s trial reenactments and panel discussion will be included in the public school curriculum throughout the state of Illinois.

The Joseph Smith hearing reenactment and panel discussion will be repeated in Chicago on 14 October at the University of Chicago’s Reva and David Logan Center for the Arts.