For a free subscription to Meridian Magazine, click here 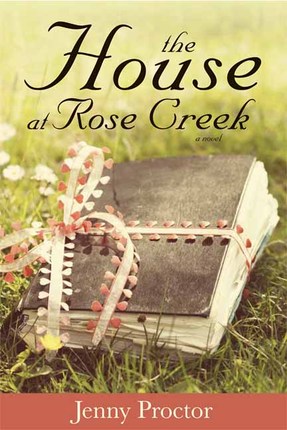 click to buyIt’s a pleasure to introduce a new author and her debut novel to LDS fiction readers, especially one with as much fresh and bright promise as Jenny Proctor and her The House at Rose Creek.

Kate Sinclair was orphaned at the tender age of seven. She grew up with three cousins and was raised by her Aunt Mary and Uncle Grey in an old farmhouse that had been in the family for several generations. Aunt Mary and Kate’s mother grew up in that house too. Kate and her cousin Leslie were inseparable for years, but as they grew older their interests changed and they grew apart. Leslie married and became a mother while Kate went off to Atlanta and a high powered career. When Leslie’s young husband died, Kate was too busy to return home for the funeral or to help her cousin through a difficult time. This resulted in an angry rift between the cousins.

When Aunt Mary dies of a sudden heart attack, Kate is heart-broken and leaves Atlanta to attend the funeral. Reconnecting with her cousins, especially Leslie, is awkward. She is filled with guilt for ignoring her family so long and tries to mend her relationship with Leslie, but her cousin is skeptical of her sincerity.

On a challenging run shortly after her arrival in Rose Creek, Kate meets an intriguing young man, Andrew, who affects her in a way the men she has dated in the past never have and marks the beginning of her reservations about returning to the city. An old journal discovered in the attic and written by a long dead ancestor affects her too and is the catalyst that begins her thinking about God and her relationship to Him.

Because of a statement in the journal, she has a conversation with two Mormon missionaries and quickly learns her family doesn’t approve of her interest in the Mormons. They assume her interest in the Church is because of the young man to whom she is strongly attracted who is a member of The Church of Jesus Christ of Latter-day Saints. Further complicating her life, Kate inherits the house which has been in her family for several generations. This angers Leslie who expected she would inherit it from her mother. Kate also learns the highway department is building a new freeway and the plans include demolishing the house to build an exit ramp on the property. This prompts an urgency in Kate to find a way to save the old house.

Not many novels handle conversion stories well, but I’m pleased to say new author Jenny Proctor handles this portion of the story beautifully. It’s not preachy and it deals with questions and doubts realistically and as a natural part of the overall story. Both Kate and Andrew have actions in their pasts which could easily be not only deal breakers, but could keep them from fully trusting each other. As Kate learns about the Gospel, she is drawn to the emphasis the Church places on eternally connecting families and feels a real closeness to her own ancestors, especially the journal writer. She also learns the hardest part of repentance is forgiving herself.

Kate is an excellent character with a good mixture of admirable qualities and faults. She’s strong and independent, yet has self doubts and reservations that have often caused her to withdraw from her family and meaningful relationships. She becomes a stronger individual as the book progresses, but not without some steps backward. Neither Andrew nor Leslie are as well developed as Kate, and I would have liked to know more about their thoughts and background.

There is enough action to the plot to keep readers turning pages and, though this book has both a conversion story and a romance story line, as well as a bit of mystery, I would call this novel general fiction. It will probably appeal slightly more to women than to men, though I don’t think most male readers will find it disappointing.

Proctor, with her husband and six children, live in the mountains of western North Carolina, which led me to erroneously expect a strong Southern voice. And though the story is set in North Carolina, the story cannot really be classified as regional. She drew heavily on her own experiences with family history in crafting this story. It has a religious message, a little romance, some mystery and action, but is primarily a family story.

THE HOUSE AT ROSE CREEK by Jenny Proctor, published by Covenant Communications, 251 pages, soft cover $15.99, also available on CD and for e-readers.