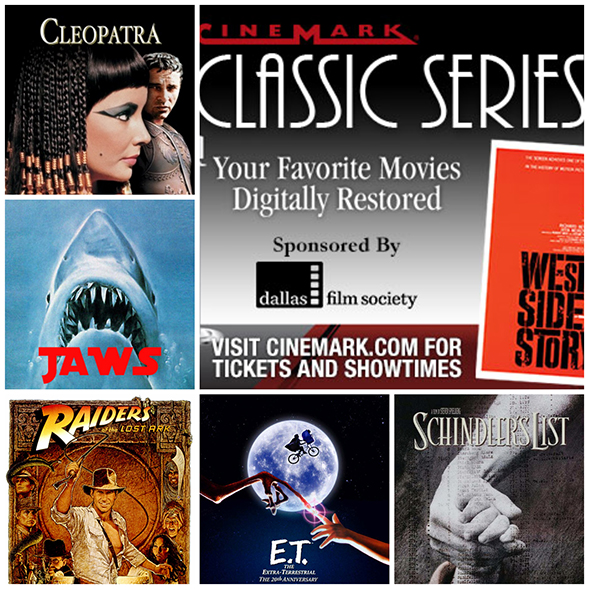 As someone who goes to the movies weekly for my web site, I’m a big fan of the theater experience. Even with the occasional texter and obnoxious teenager, I still find that nothing compares to experiencing a movie on the big screen with a quality sound system, no matter how good your set-up at home. Because of this, I have a passion for watching classic films in a theatre whenever I get the chance; there are so many details you just don’t catch watching them on a TV screen.

Cinemark Theatres, through the Dallas Film Society, hosts a classic film screening every week at theaters around the country. That’s right, every week at a theater likely near you, they show films like Ben-Hur, The Sound of Music, West Side Story, High Noon, Young Frankenstein, Gone With the Wind, It’s a Wonderful Life, Butch Cassidy and the Sundance Kid, Forrest Gump, Lawrence of Arabia, Casablanca, and more, all digitally restored in high-definition for the best possible picture and sound.

Their current lineup is particularly strong. On Wednesday, May 22nd they’ll be showing the lavish, big-budget epic Cleopatra, starring Elizabeth Taylor, for its 50th anniversary. During the month of June they’ll be having a Steven Spielberg series, with Jaws, Raiders of the Lost Ark, E.T: The Extra-terrestrial, and Schindler’s List. The films usually show on a Wednesday or Thursday at 2:00 and 7:00 p.m, but you’ll want to check the site for that.

I’ve seen Raiders of the Lost Ark on the big screen, and trust me when I say that it should not be missed in that format. I’m thrilled to see the rest of them that way as well. While I normally avoid R-rated movies, I personally will be making an exception for Schindler’s List, based on my personal feelings and the counsel of Elder Dallin H. Oaks regarding statements by the Brethren:

“As a General Authority it is my responsibility to preach general principles. When I do, I don’t try to define all the exceptions. There are exceptions to some rules…But don’t ask me to give an opinion on your exception. I only teach the general rules. Whether an exception applies to you is your responsibility. You must work that out individually between you and the Lord“ (The Dedication of a Lifetime, CES Fireside, May 1 2005).

You, of course, will do as you choose, but certainly the classic series in general is something to be excited about. Keep your eye on it, as I’m sure you’ll find something suitable for a date night or family night at the movies!

For more of my articles and film reviews, please visit www.mormonmovieguy.com.

Heaven is for real