Non-fiction books, as well as works of historical fiction, are excellent tools to teach young people about our Country’s past. Throughout the books reviewed below, young and old will be enlightened, inspired, amazed and in some cases troubled from events that should never be forgotten. These are all picture books and are good for family discussions, except for the last book which is an easy-to-read chapter book. 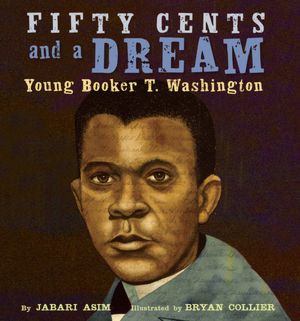 Fifty Cents and a Dream: Young Booker T. Washington, by Jabari Asim, and beautifully illustrated by award-winner Bryan Collier, takes the reader back to Washington’s youth as he dreamed of learning how to read. In this powerful, sparse free verse, you learn how he walked 500 miles without any money to make it to school. During his young life he experienced being freed from slavery, working in a coal mine, surviving in a salt furnace, and yet he didn’t give up on his dream. The breath-taking illustrations, made with watercolor and collage, fill the pages. Be sure to read the back-pages where both the author and illustrator shine a light on their inspiration. There’s also a time-line and additional facts found in the back of the book.

Unspoken: A Story From the Underground Railroad, by Henry Cole, is a wordless book that showcases a very powerful message. A young girl is tending to her cow when she sees Confederate soldiers passing near-by. She goes about her farm chores when she discovers someone is hiding in her cornstalks. Later in the evening, she takes food to this runaway helping save him. The soft pencil renderings, along with the cream-colored and texturized paper, give this an ambiance of trepidation, anxiety and awareness. The fact that there are no words help create many subtleties that underlie the times back then such as fear, secrecy, wariness for slaves and even the tremendous difficulties of the Civil War. 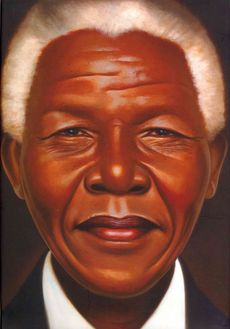 Nelson Mandela, by award-winner Kadir Nelson, showcases this tremendous South African leader on the cover. His strong face covers the entire cover. The life story of this celebrated president is told briefly, yet distinctly. It starts with his tribal beginnings, his work as a young lawyer, his long imprisonment and his election to become president of his country. The difficulties of apartheid is kept to a minimum, but is still mentioned. The free-verse helps keep the information interesting and powerful. But, it’s the full-page (and sometimes open-spread) pictures that arrest the attention. They are painted with glorious exactness and capture Mandela’s life in sequence shots.

Just as Good: How Larry Doby Changed America’s Game, by Chris Crowe, and wonderfully painted with acrylic by Mike Benny, sets the stage for the groundbreaking significance when in the late 1940’s Larry Doby was able to play in the American League of baseball. Told through young Homer’s eyes, his excitement and anticipation shows as he and his dad listen to the World Series on their radio. There is also some fascinating historical information found in the back of the book. 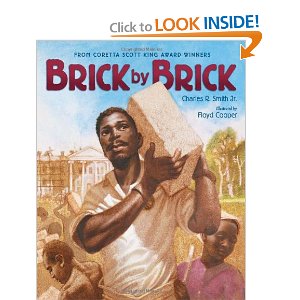 Brick by Brick, by Charles R. Smith Jr., and beautifully painted by award-winner Floyd Cooper, brings to the forefront those who helped build the White House. Included were some free blacks, some Scottish and other immigrants, but that wasn’t enough. So Virginia and Maryland land owners rented out some of their slaves to complete this giant task. The poetic verse reverberates the laborious sounds and difficult effort it took to build this giant edifice. The features on the faces of this work-force are striking as the visual expressions overlay with laborious application. More information is also found at the back of the book.

Harlem’s Little Blackbird: The Story of Florence Mills, by Renee Watson, and illustrated by Christian Robinson, is the story about how Florence Mills went from being born to parents who were former slaves to sing and star on Broadway in the 1920’s. When she was at the height of her popularity, she was offered to become part of the Ziegfeld performers. But she turned it down and instead chose to support all-black musicals. The pictures are painted with vibrant hues of blue, green and brown. 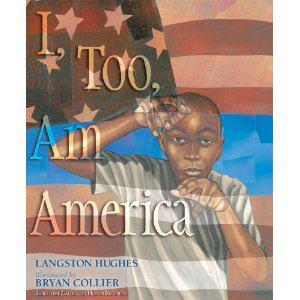 I, Too, Am America, by Langston Hughes, and magnificently painted with mixed media by award-winner Bryan Collier, is a tribute to the long-ago Pullman porters who served and aided on the passenger trains that traveled our country for many years. The well-known poem is brief, but powerful, and the detailed and beautiful open-page spreads blend perfectly! Be sure to check out the illustrator’s notes at the back.

Hope’s Gift, by Kelly Starling Lyons, and painted by Don Tate, celebrates the 150 year anniversary of when the Emancipation Proclamation became law. Hope’s father has decided to join the Union army to help fight for the freedom his people rightfully deserve. He leaves his young daughter, Hope, a conch shell and tells her to listen to its echoes of freedom. The illustrations go hand-in-hand with the story and progresses to a climax at the end when her father returns safely. 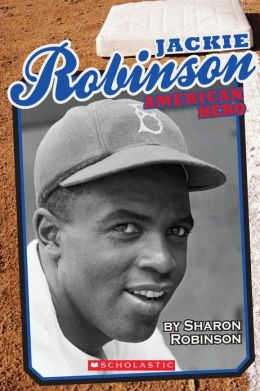 Jackie Robinson: American Hero, by Sharon Robinson, is a quick-read that features this great baseball player as he broke the color-barrier, dealt with the problems during the civil-rights movement and much more. There are also interesting photos, as well as a glossary and brief information as to why his daughter wrote this book, found at the back of the book.