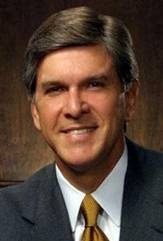 Former U.S. Senator Gordon H. Smith of Oregon is currently an Area Seventy and President of the National Association of Broadcasters located in Washington D.C..  He gave a fireside in our stake recently where he shared an interesting experience regarding how two Italian sister missionaries serving in Utah’s Temple Square Mission helped influence an important governmental decision in Italy regarding the new LDS temple in Italy.  Because it shows how effective good missionaries can be world-wide, and the ripple effect of a good example, I thought it was worth sharing with you.

While serving as a U.S. Senator, Senator Smith received a telephone call one day from Elder Dieter Uchtdorf, then a member of the Quorum of the Twelve Apostles.  The church was interested in building a new temple in Italy (later announced in October 2008), and needed to acquire formal governmental recognition for the church from the Italian government.  Elder Uchtdorf wondered if Senator Smith could please help arrange a meeting with the appropriate government officials in Rome.  Senator Smith agreed to not only help set up the meeting but to also fly to Rome to help with the important presentation to the Italian official.

When they arrived at the meeting in Rome with the Italian official supervising religious affairs in Italy. The Italian Minister was a gracious and knowledgeable woman.  She had the Assistant Minister join the meeting.  Senator Smith introduced Elder Uchtdorf as an Apostle from the Church and quoted to some references in the NATO treaty which included Italy and the U.S.

Elder Uchtdorf told about the Church and how its larger presence in Italy would benefit and bless the Italian people. He also explained the problems the members an missionaries were facing since the Church was not fully recognized as a religion but only as a charitable organization.

The government official looked at her assistant and asked for his opinion regarding the church’s petition. The Assistant Minister replied that he had recently been on a visit to the United States with his family, and had toured Temple Square in Salt Lake City during his trip.  The assistant went on to explain that when they arrived at Temple Square their tour guides were two young Italian sister missionaries. According to the assistant, the two sister missionaries were very impressive and glowed with energy and enthusiasm.  He then said in effect: “If the Mormon Church can raise such outstanding young people as I saw serving there in Utah, then by all means you should give the LDS church all the recognition they need to build their temple here in Italy!  I hope they can raise up thousands of young people here in Italy like the ones I met in Utah!”  That comment seemed to have the appropriate effect and the meeting concluded successfully.

Later, after the appropriate Italian approval was granted, the announcement of a temple to be built in Italy was made during General Conference on October 4, 2008, by President Thomas S. Monson. When the announcement was made by the Prophet from the Conference Center pulpit,  President Dieter Uchtdorf looked down in the congregation at Senator Smith and gave him the thumbs up to help thank him for his significant contribution in acquiring the necessary governmental approvals. (President Uchtdorf had become a member of the First Presidency earlier that year on February 3, 2008.)

Italy President Giorgio Napolitano signed the Intesa con lo Stato, or legal agreement, on 30 July 2012.  In contrast to the 1993 legislation that recognized the Church as only a charitable institution, the Church is now officially recognized as a religious denomination, along with the Catholic Church and a few others.  The first meeting with President Uchtdorf was the beginning of this important process that culminated recently in the final signed agreement.

During his  fireside, Senator Smith concluded by commenting that those two unnamed Italian sister missionaries serving on Temple Square may never know of their important contribution or what they accomplished by just having the spirit with them and being such marvelous examples during the brief tour of the museum and Temple grounds with the Assistant Minister.  The Italian temple will likely serve church members in Greece, Cyprus, Albania, Slovenia, Croatia, Bosnia-Herzegovina and Macedonia, as well as the 23,430 church members who live in Italy. The Italian temple is currently under construction, which began October 23, 2010 with a groundbreaking ceremony.

This miraculous outcome, based largely on a divine rendezvous on Temple Square, could have been very different had the two Italian missionaries acted inappropriately in any way during their tour.  The two sister missionaries had no way of knowing that they were giving a tour to a government official or that an apostle would soon be flying to Italy for a meeting that this man could influence in such an important way.

Missionaries need to realize that they are being carefully watched by others, and that the ripple effect of their good deeds and examples can significantly affect other people years later and many miles away.

Members also may never know the impact that their good examples have on other people and their decisions.  As President Monson often teaches, in the work of the Lord, there are no coincidences.  For those two sisters to be together at precisely the right time and place in order to give a tour to a man who would shortly thereafter be able to assist President Uchtdorf in accomplishing his important assignment from the Prophet is miraculous indeed.