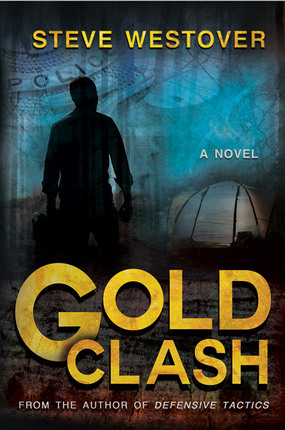 For some time LDS Young Men and Young Women have been participating in reenactments of various high points in Church history, pioneer treks, and other occasions which in the past called for heroism and faith. In Gold Clash by Steve Westover a group of youth representing a ward in Caldwell County, Missouri, participate in the reenactment of the rescue attempt of three Mormon men who were kidnapped and dragged into Ray County in 1838 by anti-Mormon mobbers. This incident is known to members of the Church as the Battle of Crooked River.

Clay is new to the ward and doesn’t know either Church history or the other young people well, but he strikes up a friendship with the Bishop’s nonconformist daughter, Liz. During the overnight encampment a kidnapping occurs and Clay conceals himself in the back of the kidnapper’s truck in a frantic effort to save Liz. He’s not the only witness to the kidnapping, one of the young men leaders, Jimmy, begins a frantic chase of the pickup truck, determined not to lose sight of the kidnap vehicle.

A grave is dug up, one that didn’t hold a body, but it provides a strong clue to strange happenings being followed by a pair of FBI agents. Several unusual crimes have occurred in a short time and the only link seems to be a battered old pickup truck seen near each crime scene, fortunately the cemetery caretaker noted the license plate number. When the agents get word of the kidnapping, they set up a search and stay in close touch with the man following the truck. They have no idea how the young people participating in the enactment are connected to the series of crimes they are following, but there seems to be a tie in to Mormon history in the area. They learn of an old legend concerning Mormon gold hidden in the area. There are also rumors of confederate gold hidden from Union troops. More frightening is a discovered link to organized crime and a grisly murder.

There are multiple plots vying for attention in this mystery novel and it is part of the mystery to link them together. Some of the clues are pretty obscure unless the reader has a strong background in Missouri history through the middle of the nineteenth century. Even so the mystery is tantalizing and fun to try to solve. The FBI agents bring a touch of romance to the story though I would have liked to see the female agent who is also the senior agent make more of the discoveries and behave better toward her partner. The young leader from the reenactment is a fun character, the kind everyone loves, but at the same time drives everyone a bit crazy. He does accomplish what he sets out to do however. The other characters are very much individuals and well drawn. Clay and Liz both mature through their experience, the agents are a little more honest and open with each other, but Jimmy is the sort that may mature somewhat but will probably never quite grow up.

This novel will likely appeal widely to both male and female readers, teens and adults. Mystery and history fans will particularly like this one.

Steve Westover served an LDS mission in Independence, Missouri and graduated from Brigham Young University. This is his third novel and a spin off from his 2010 release, Defensive Tactics. He and his family live in the heart of the area where this novel is set. He serves as bishop of his ward and is active in the business community.