Back in the Saddle | Meridian Magazine

Back in the Saddle

Editors’ Note:  Mariah Proctor has just returned from four months of study abroad at the BYU Jerusalem Center for Near Eastern Studies.

I’m back on American soil and after the initial fall-to-your-knees-and-kiss-familiar-ground moment, I looked around at all the fair skin, caught a whiff of the butter fat, understood the language of the conversations in my earshot and wanted to cry. The moment I knew would come, has come; I’m home and feeling dead homesick. I flew from Zion to Zion and I want to go back to Zion.

There’s nothing in the world like the stretch of highway between the airport and home especially after a long sojourn in a foreign land. It’s familiar and lovely and the air hums with the anticipation of the life you are about to pick back up again, but yesterday’s drive rendered my heart rent in twain by the life that is here and the life that I had.

Ok, I’ll admit it was a lovely feeling to not only take my car out for a drive, but be able to go someplace without having to scan out with security or live in the company of two other people. I went on a drive by myself. It was absolutely marvelous. But driving around running errands and falling back into my routine was jarring in that I snapped back to reality, and it felt as if the past four months hadn’t even happened.

The girl who drove to the airport four months ago isn’t the girl who drove home yesterday, but for all that this place has changed, she may as well not have altered a wink. I looked around at same old, same old Provo and realized that most people not only don’t know about, say, the destruction of the 2nd Temple, but most probably don’t care that they don’t know because it doesn’t touch their world.

I’ve officially told my first unsuccessful Ancient Near East joke to deaf ears. There’s nothing like whipping out some witty comment about Amarna Realism and having it fall completely flat in front of your eyes. There was a follow-up attempt involving Assurbanipal and Nabopolissar, but it just got increasingly more pitiful the more I spoke.

Traveling outside the inside’ where your jokes are funny is depressing, but the real question is how, when your brain has been stretched by new ideas, do you ensure that it doesn’t just shrink and deflate back to its original shape? More importantly, how, when my immediate concerns change from humanity’s view of its God and the daily individual struggle for truth, to how best to stretch a dollar at Smith’s or how early to start on that paper for my English class, do I keep my heart swollen with love?

Jerusalem filled me with a constant source of revelation and poetry and love and wonder and I’m not down on my college town, but Provo has never really done that for me. How, now that the holy city isn’t before me so I can stew, chew, and view, do I replicate the same empowerment and desire for empathy and righteousness that was a constant part of my life there?

I’m in a bemoansome mood right now, but the most common testimony borne at the Jerusalem Center second only to a conviction of the power of the atonement was an acknowledgment that they didn’t have to come to the Holy Land to know what they knew.

When Sahar, a Palestinian woman in our branch came back from spending a month in America, she said that when she went to the various chapels for church she’d always look out to where Jerusalem would be and find only a wall. 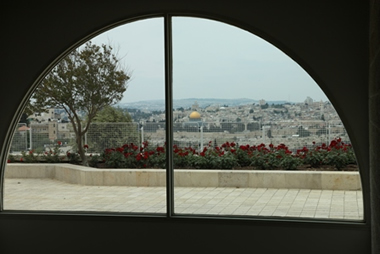 I have a feeling that for a while here, life will just be like that; I will look out to Jerusalem and find that wall. But I’ve been given precious and powerful spiritual witnesses and experiences and when I find that wall I will cling to those memories of the times that I’ve felt the Spirit until I see Jerusalem again.