Reading: The Greatest Pastime of Summer

Summer is right around the corner and so is more time to relax and read. Here are some out-standing newly published books geared for kids ages 9 and older, unless otherwise stated. 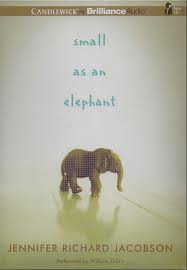 Small as an Elephant, by Jennifer Richard Jacobson, is a captivating story from the first page to the last. Jack and his mom have left Boston and are on a camping trip in the Maine backwoods. When he wakes up in his little tent, he discovers that his mom has left. The rest of the story is how and what Jack does to deal with this predicament. His mom has abandoned him before and he was taken to Childhood Services and he doesn’t want that to happen again so he decides to tell no one in the camp or beyond, as he begins his search for his mom and ultimately heads back to his home. This page turner will definitely pull the reader in from beginning to end.

The Klipfish Code, by Mary Casanova, is an exciting look into the lives of two siblings as they cope with the Nazi invasion into their Norwegian country. This book is historical fiction in its best form as it educates and informs all while keeping the reader turning the pages to see what happens to Marit, and her little brother, as they attempt to survive on a small island off the coast with their grandfather while their parents help the resistance. Be sure to check out the author’s notes and glossary in the back which highlights some of the difficulties Norway had to endure throughout World War II, as well as a glossary defining (along with a pronunciation key) Norwegian terms sprinkled throughout the story.

The New Kid, by Mavis Jukes, has almost 9-year-old Carson moving to a new town with his dad and that means he has to deal with a new school. There are many fun and humorous moments in the story as he begins to acclimate to his surroundings, especially in school. This is a perfect book for families preparing to move to a new location. This book is great for ages eight and older.

The Dead Gentleman, by Matthew Cody, is one of those books you hope reluctant reading boys will pick up because they’ll most likely discover the joys of reading. This book has all the elements to thwart non-readers into excitement and adventure. It’s 1901 and eleven-year-old Tommy is an orphan and discovers a dangerous spider in an old hotel basement. But while in the basement, his world collides with modern-day Jezebel, who also decides to explore her building’s basement. Tommy and Jezebel must stop the villainous Dead Gentleman who is attempting to conquer earth in this time-travel story. 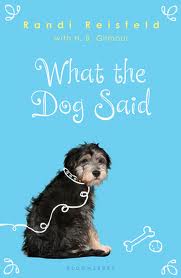 What The Dog Said, by Randi Reisfeld, along with H. B. Gilmour, is a touching and funny story told through the eyes of thirteen-year-old Grace as she deals with the death of her police officer father. She’s struggling with all aspects of her life including school and friends until her sister decides to train a shelter dog into a service dog. Grace is about to believe she’s going crazy when this dog, whom they name Rex, begins to talk just to her. There’s much Grace is about to discover about life, hope and unconditional love.

The Hop, by Sharelle Byars Moranville, and sprinkled with drawings throughout by Niki Daly, is the perfect celebration of the natural beauty of our earth. Tad is a small toad who decides to save his home by kissing a human girl. The same time Taylor, a young girl, is not going to let her grandmother’s beautiful natural pond get turned into a shopping mall. This book is good for ages eight and up and is a perfect read-aloud that all ages will surely enjoy!

The Great Cat Conspiracy, by Katie Davis, and with drawings sprinkled throughout by Hannah Shaw, is a sequel to “The Great Hamster Massacre” and “The Great Rabbit Rescue!” This hilarious story goes awry when the New Cat gets kidnapped after bringing dead things into the house to give to Tom. The mystery of this disappearance, and the reactions and dealings with family members, will entertain and engulf as they search for the missing feline. 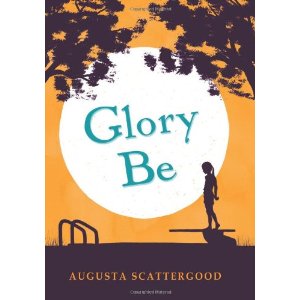 Glory Be, by Augusta Scattergood, takes place in a Mississippi town in 1964 when great difficulties arise with segregation in a public swimming pool. This historical fiction showcases friendship which is at the heart of this well-written story. Glory is about to turn twelve but there are many problems facing her, and her best friend Frankie, now that a new girl from the North has just moved in. This eye-opening story centers on family, friendship and making the right choice – even if it takes courage!

Stealing Magic, A Sixty-Eight Rooms Adventure, by Marianne Malone, is a sequel to “The Sixty-Eight Rooms” but it’s not necessary to read the first book to enjoy this marvelous magical mystery. Ruthie and Jack have discovered that miniatures from the famous Chicago Thorne Rooms have started to disappear from the rooms. They find that even they can’t shrink to attempt to locate the items from these miniature rooms because the magical key that allows them to get small has also disappeared. Get ready for this page-turner, but make sure you have time to read it all as you won’t want to stop!