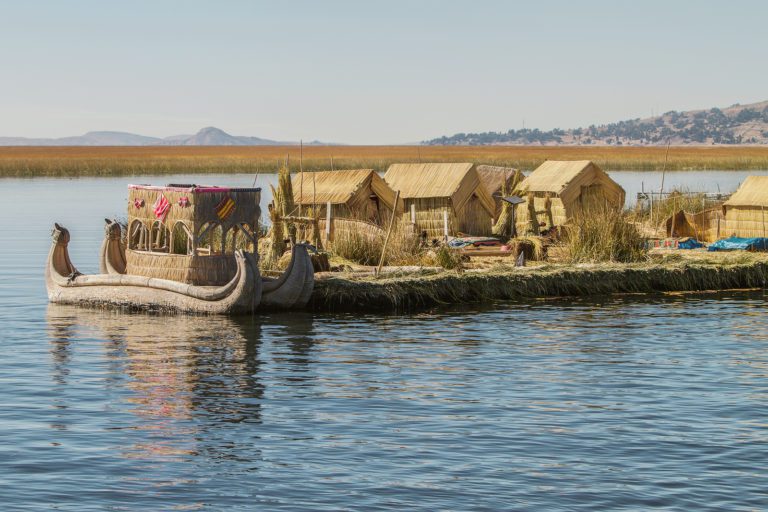 We had just finished touring the first of the floating islands of Lake Titicaca, with the rest of the day ahead of us to visit others. As we gathered back to our boat, some Peruvian men rowed up in a boat they had made from the same reeds as the islands. It was designed in the same Peruvian style as their ancestors had done for thousands of years. For only ten sol each (about $3.50) they offered to transport anyone around the lake to the other islands that we planned to visit.

Our whole group was fascinated by the boat and gathered around it. It was an incredible feat of ancient engineering with tightly interwoven reeds, even boasting a second story. It was rowed by two men who also steered it. When the men who owned it were ready to depart, only three of our group, myself included, decided to join them on that adventure.

“Are you really going to go on that thing?” Tom asked me.

“Aren’t you afraid it will sink?” he asked.

I shook my head. “Not in the slightest.”

He looked at me incredulously. “How can you be so sure?”

“The guys that built it are riding on it, and they don’t have any qualms.”

“Maybe so,” Tom replied. “But I’ll take modern technologies over ancient ones any day. I will travel in a modern boat, powered by a modern motor, and while I zip safely from island to island, you will be out there slowly going across the lake with little time to spend at each place.”

But there was no way he could deter me. As a boy, I had been fascinated with the idea of building rafts. Of course, I must admit, everything I built sank almost immediately, but still the fascination lingered. To ride on something that actually floated and was made completely from reeds was a boyhood dream.

The three of us retrieved our life vests from the boat we had come in, paid our 10 sol, and climbed aboard the reed boat. The two Peruvian men eased it away from the island and started rowing into the open lake. Tom laughed and called out to me from the island. “See you at the bottom!”

I climbed the ladder to the second level and enjoyed the view and the swoosh swoosh of the paddles that kept us moving. It was much more peaceful than hearing the droning of a boat motor.

When we reached the next island, the rest of our group was nowhere to be seen. We had been quite a while, so we assumed they had come and gone. We enjoyed our tour of that island, and then continued on to the next. We went to quite a few more islands, never seeing the rest of our group at any of them. Finally, we headed to our final destination where we were all to gather for the trip back to our hotel. Again, our group wasn’t there.

We had a wonderful tour of that island and bought a few souvenirs. It grew late, and still the others hadn’t come, so we began to grow concerned that they had already been there and decided to head back to the hotel without us. We started to discuss how we might make our own way back when we heard the sputtering sound of a motorboat approaching. We looked, and sure enough, it was our group.

As they pulled up to the island, everyone in the boat was scowling. When they climbed out onto the island, Tom asked, “So how was your day?”

“Great!” I replied. I then told him about the peaceful excursion from island to island. “How about yours?”

“Our day,” he replied, with disgust, “was spent in the middle of the lake trying to get the stupid boat motor to start. We haven’t been anywhere else since that first stop.”

I grinned and said, “But aren’t you glad you got to spend it with modern technology?”

I would say there's no such thing as ancient and modern technology, but just technology. I always used to wonder about the stories that the point on swords was 'discovered' as if men fighting for their lives were too stupid to recognize its use, and then after all the fight books came back to light it was always just a myth. They didn't use the point because it's almost useless against chain mail. So is an extremely sharp edge; you have to break bones, since a steel sword has a very hard time cutting through iron links. Turns out those medieval idiots knew what they were doing after all. Technology is at root what works--tried and true. The theory is irrelevant. So if it worked 5,000 years ago it'll likely still work. I think it ought to be obvious to we Mormons, since the Book of Mormon very plainly illustrates the cyclical nature of history rather than any progressive theories. Technology gets lost, but it will still work when rediscovered even millennia later. And I would never ever set out over a long distance in a motorboat without a few sweeps or paddles on board.