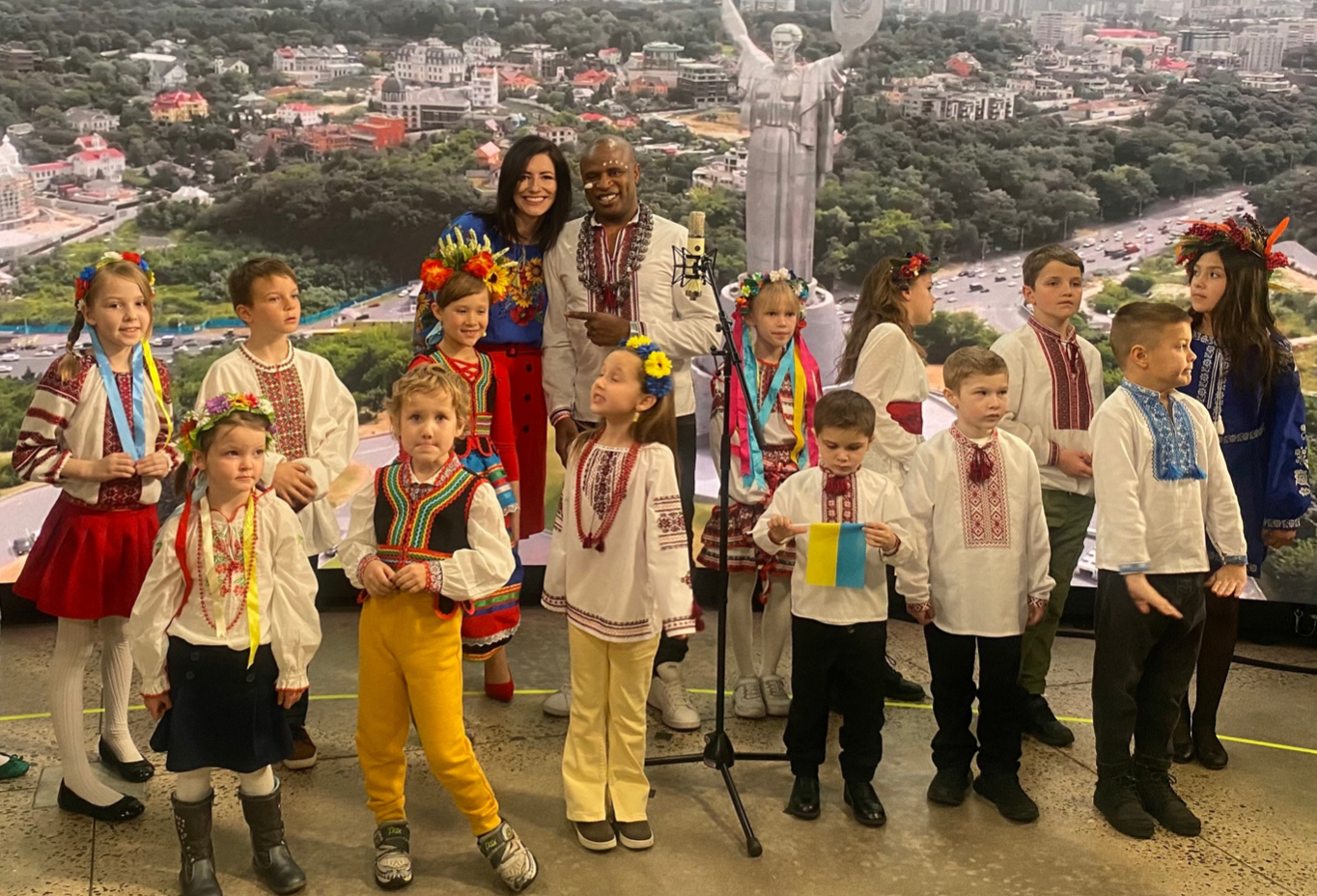 One of Utah’s most visible professional musicians, Alex Boye, has recently spent time doing something he never envisioned: learning to sing in Ukrainian. With the help of the nonprofit ToUkraineWithLove.org and a group of children born to Ukrainians now living in the U.S., Boye is aiming to channel donations directly to families battling for their lives in Ukraine.

“I’m a dad of eight kids, and I can’t even imagine what the families of Ukraine are going through right now,” he said. “My wife, Julie, has been literally obsessed with watching everything going on over there. And because of the anxiety she felt for those moms and dads and kids, she kept asking, ‘What Can We Do?’ Then some of my fans suggested adapting this song, and Julie was like, ‘Do it! Do It!’”

Boye debuted his Ukrainian version of his song “Bend Not Break” at a pro-Ukraine rally at the Utah State Capitol building in Salt Lake City March 12. “Frankly, I was pretty nervous about singing live in Ukrainian,” he said. “I’m sure my pronunciation was imperfect, but I’m hoping people could see through that and feel my love and passion for their plight.”

The song hasn’t yet been released as a single or as a music video, but Boye anticipates that will happen in the next couple of weeks. However, he has been invited to sing the song again, along with the Ukrainian children and other musicians, at a “Voices of Ukraine” benefit concert to be held Monday, March 21 at 7 p.m. at Salt Lake City’s Cathedral of the Madeleine, 331 E South Temple.

“At the end of the soon-to-be-released video I’ve invited Svitlana Miller, a Ukrainian-born educator now living in Idaho, to make a plea for donations to her nonprofit, ToUkraineWithLove.org,” Boye said. “This organization is incredible. In the first two weeks after the invasion of Ukraine, Lana & her team got $70,000 worth of medical supplies, food and safety equipment across the border and into cities near Kyiv. This is all about families in Utah and Idaho and everywhere donating directly to help families in Ukraine, and I love that. We’ve seen photos of parents, brothers and sisters, and even little toddlers holding onto items that open-hearted people on our side of the world have provided.”

“Please, please,” he said, “get the word out about this nonprofit so people can donate funds toward their next shipment of goods. The funds being donated now will be used to buy baby formula, emergency ice packs, meat and other life-saving items that will be purchased at the beginning of April in Europe and then military-escorted across the border and into Ukraine.”

“I’ve always heard that you can’t save everybody, but you can save somebody. Making this new music video is a way to try and save somebody,” he said. The song was written by Jordan Powers, Randy Jackson, KC Knight and Alex Boye. Alex sings the first verse in Ukrainian, and the children’s choir sings at the end in Ukrainian.

The March 21 concert at the Cathedral of the Madeleine at 7 p.m. is free and open to the public. Donations will be accepted, with 100% of proceeds going to buy life-saving supplies for Ukrainians. In addition to Boye, local musicians from The Madeleine Choir School, University of Utah, Utah Symphony, Utah Opera and the Utah Ukrainian Association will perform musical selections.

To make donations, visit ToUkraineWithLove.org, which is a 501(c)3 nonprofit. Donations are tax-deductible.

Nonprofit leader Svitlana Miller and musician Alex Boye join children of Ukrainian-born citizens now living in the U.S. as Boye films a Ukrainian version of his song “Bend Not Break.” Originally released in English as a suicide prevention song, “Bend Not Break” includes lyrics that are also relevant to the trauma people are experiencing in war-torn Ukraine today: “I can tell by the way you feel it’s hard to stay strong. In the midst of all this madness through the darkness please hold on. Yeah, won’t you please hold on? Hold on!”