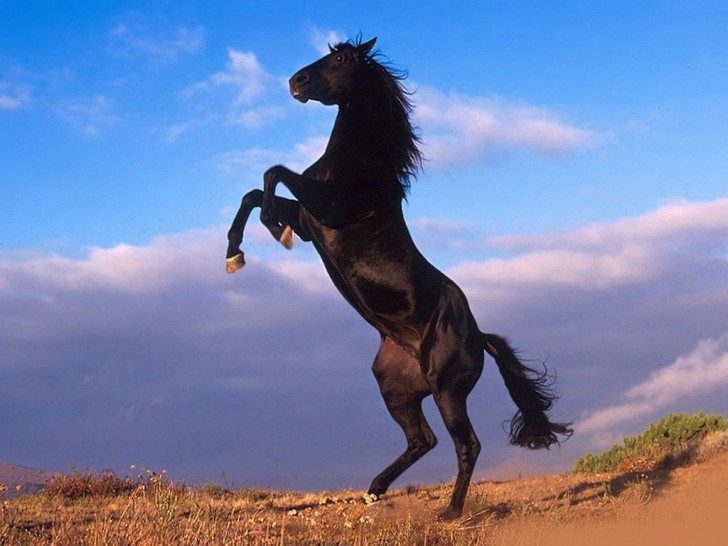 The phone rang and my wife answered it. “Yes, he’s here.” She handed me the phone. At the time I was a graduate student at Utah State University, and to make ends meet, one of the jobs I did in the evening and on weekends was to take care of beautiful, high spirited race horses.

Barbara, the lady who owned the horses, traveled in the circles of the rich and famous, flying all over the world. She was only home at most a couple weekends a month. When I took the phone and said hello, Barbara spoke in her very distinctive voice.

“Daris, I have a horse coming up there. You will need to unload him into a pasture I have rented. But be very careful because he is a huge, vicious stallion.”

After getting more details, I promised I would take care of him, but after hanging up I wondered why Barbara would buy another mean stallion. We had both nearly been killed by her first one, and she finally had to sell him.

When the day came, I arrived early at the appointed meeting place. Two men drove up in a large pickup that was towing an 8 horse trailer. I motioned for them to follow me, and I drove to the rented pasture. They couldn’t pull right up to the gate due to the mud and narrow road, so they just parked about 100 yards away. “Good luck,” the older one said as they smiled at me. Then they headed down the road to a local coffee shop.

“Aren’t you going to help me?” I called after them.

He laughed. “Are you crazy? We saw the dozen or so men fight to get him in there. They only paid us to drive him up here, and didn’t include any hazard pay.”

With that they were gone, leaving me to ponder what I should do. I pulled a lead rope out of my pickup and walked to the front of the trailer where the horse’s head was. I took a deep breath, then opened the small door.

I looked in to see the biggest, most beautiful stallion I had ever seen. He was pure black except for a shimmer of red that glistened his coat. He reached out his nose, and I nervously pulled back. Then I carefully reached out my hand and petted his silky muzzle. He sniffed my hand and seemed to quiver with excitement. I wondered if he was just trying to take me off guard.

I scratched his ears, and he nuzzled me. I went and got a handful of grain. He ate it from my hand, tickling my palm with his lips, but never touching me with his teeth. I couldn’t see any meanness in him, but I was still wary, not wanting a nasty surprise.

Finally, I hooked the lead rope on his halter and threaded it to the back door. I opened the door and he backed out. That was when I truly realized how big he was. He stood taller than me at his withers, and his raised head was a couple of feet above mine. He reached down and nudged me playfully. I thought he was probably the most magnificent creature I had ever seen in my life. The only blemish he had was that the knees of his two front legs were huge. I could tell they had both been broken and had net been set properly, if at all.

As I led him to the pasture, he pranced as if he was barely able to control his excitement. I had an apple in my pocket that was to be part of my lunch. I took it out and broke it in half. I gave him a piece and I started eating the other. He finished his quickly and nuzzled me for more, so I gave him the rest of mine.

When I released him into the pasture, he raced across it with his tail and head held high. I had never seen a horse run so fast. At the other end, he turned and came back to me at full speed sliding to a stop at my side. I had no more food to offer him, so I just stroked his head and neck. After a moment he turned and ran again, only to come back once more. We repeated this for over an hour.

When the two men returned, they stood by the fence watching us, their mouths hanging open. I turned to them and laughed. “I thought you guys said this horse was mean.”

“Mistuh, “the younger one said, “dat horse wuz like Satan hisself! He nearly kilt half a dozen men as they tried to load him!”

That night, Barbara called to make sure I was all right. I told her I was fine, and that I thought he was probably the gentlest stallion I had ever seen. She thought I was teasing her, and asked to hear the whole story. When I finished, she was really quiet.

When she finally spoke, she simply said, “Feel free to work with him, but be careful, and I’ll tell you more about him when I come up.” Then, just as she was about to hang up, she said, “Oh, and his name is Cashmere. At least that’s his first name. I can’t remember the other 14 registered names, so that will have to do.”

Look up his book "Born to run, live to be free" - you'll get most of the story there, but with a few changes (names, for one).

Whee the rest of this story????