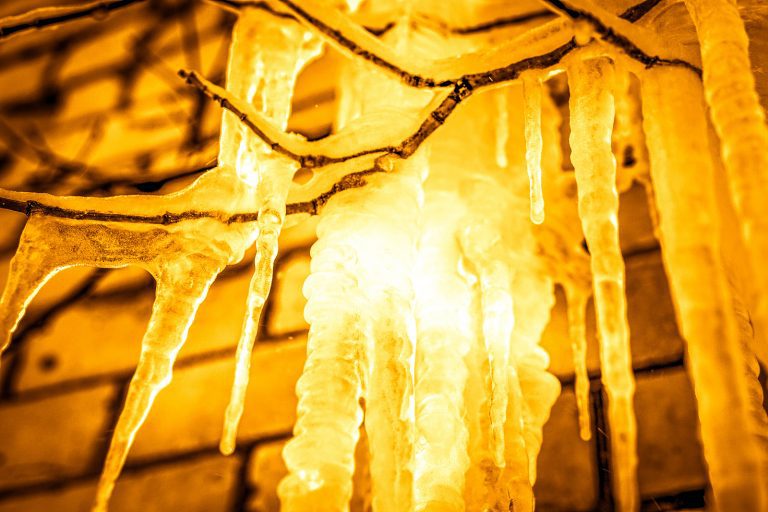 My cousin, Becky, had her daughter and son-in-law moving up here to go to college. We invited them to come out to dinner when they finished. But as luck would have it, the truck loading took longer than expected, so it would be hours after the planned dinner time before they would arrive.

When Becky finally called, she said they were still a half-hour from their destination. She was going to take them some food because they wouldn’t make it out for dinner. I said I would be happy to drive in and help unload the truck, and Becky’s daughter gratefully accepted my offer.

The drive to town typically takes me about twenty minutes. But the temperature had dropped, freezing everything. The roads were slick, and at one point, a car was flipped on its top over an embankment. The police were already there, and traffic was moving slowly around the accident site.

Even though I thought I would beat the moving truck to the apartment, people were already unloading the truck when I arrived. I jumped in and helped, but it was slow going. The parking lot was like a skating rink, and everyone had to shuffle like penguins to keep from falling down. This was especially hard carrying boxes, mattresses, and couches.

The stairs up to the apartment were wobbly and instilled little confidence in their ability to hold a person’s weight, especially when carrying something heavy. But everyone worked steadily and carefully, and it wasn’t too long before the truck was unloaded.

But the moving truck couldn’t hold everything, so they had loaded the more fragile items into cars. So, with even more care, we started unloading them. Often, even with something that was not too heavy, two people would each take an end. This offered stability walking across the ice, and if one of the two slipped, the other could hold tightly to the item so it wouldn’t fall.

It was with just such a box of valuable pictures and nick-nacks that another of the men and I carefully made our way across the ice. It was slow going, and with a couple of almost falls, the box holding the items split open on one side, making getting the contents safely inside even more difficult. But with great care, we made it across the ice. Then, with the same slow process, we made it up the stairs and into the apartment. It was with great relief that we set the box down.

When we returned to the car, Becky’s husband, Scott, had a basket full of extremely breakable porcelain figurines. It was full and heavy, but he is strong and had a good grip on it. The basket was an awkward shape and was probably easier for him to carry alone. Otherwise, any of us would have offered to help. He slowly, cautiously made his way across the ice, and I breathed a sigh of relief when he made it to the stairs.

But Scott still had to carry the basket up to the apartment. With the stairs wobbling under his weight, he worked his way up each step. Once he reached the top, he was pretty much home free, and he soon had the basket inside. He had done a superb job, and I’m sure he felt proud of what he had done.

While Scott returned for another load, Becky was rummaging around in the car, apparently looking for something. When Scott finally made it back to the car, Becky pulled her head out and turned to him.

“Scott, did you take that basket full of porcelain items into the apartment?”

Scott smiled and nodded. “I sure did.”

“Well,” Becky said, “could you go get them? They were supposed to stay in the car.”

And that reminded me of how, too often, when I feel I’ve done a good job, I instead find out I have done it all wrong.

First response: exasperation! Then I thot, she could have had a wonderful wry response about how well he acted but that she had failed in her communication and also that the exhausted but accomplished ice ballet dancer obeyed his sweetheart so well.