When You're Happy to Give, But Unwilling to Receive | Meridian Magazine 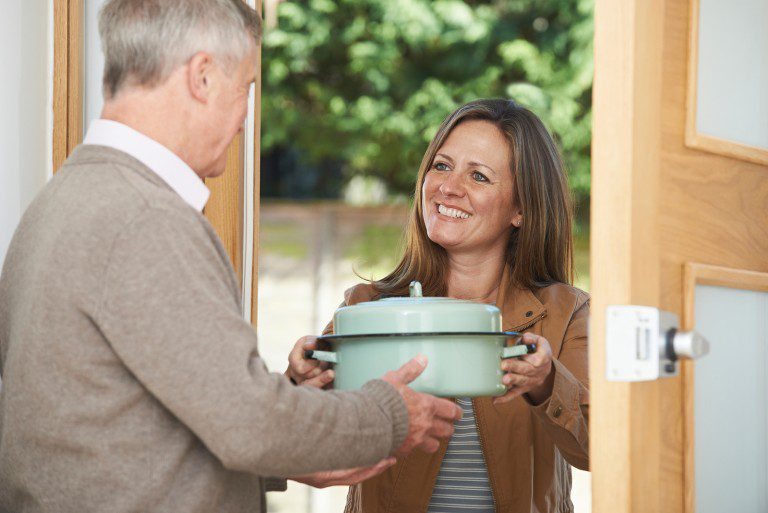 When You’re Happy to Give, But Unwilling to Receive

I recently read The Gifts of Imperfection by the popular TED speaker, Brene Brown. It’s about embracing your authentic self, among other things, and at one point she says this:

This hit me with absolute clarity and made me realize how wrong we are when we elevate our self-sufficiency to the point that we never share with ward members when we’re having a surgery, or when a problem arises that others might help us through. (Yes, I know there’s medical privacy, but I’m hoping you get my point, that some of us keep too much under wraps– from spiritual tragedies to grieving a death to legal entanglements to moves to job losses, and so on.)

For one thing, humans crave—and benefit from—connections. We need to need each other. It’s healthy and it’s God’s design for us to bear one another’s burdens, even “mourn with those who mourn.” (Mosiah 18:8-9)

But when we wrap ourselves in a cloak of privacy to the exclusion of letting others see our struggles and pain, we actually set ourselves apart from “those sufferers” and not in a pretty way.

I once heard a man brag that his mother—a single mom working two jobs—never once asked ward members for help as she raised him and his siblings. I felt uncomfortable hearing this, and now I know why. This refusal to accept the love and offerings of those around her not only deprived her of connections and Christlike service, but it taught her children to see such charity with disdain, as if you are “less than” when you lean on others.

There are, of course, many exceptions to this. First, there will always be those who take advantage of kindness, who expect their ward to do far more than is realistic, including things they could certainly manage themselves, but which they feel entitled to demand. We all know people like this, in and out of the church. That’s on the other extreme end of the spectrum.

There are also countless people who turn down help for a legitimate reason. For example, I know a man who is so painfully shy that to suddenly be deluged with well-wishers would absolutely overwhelm him. The resulting stress might even be worse than his original problem!

I also know a woman who lives with her aging mother, who is a hoarder. The mother won’t seek professional help, and the daughter can’t afford to move out. So the younger woman is reluctant to let people into her home, embarrassed for others to see how they’re actually living.

Some folks are blessed with such a large extended family that they truly don’t need additional help. In fact, sometimes they have so much help they’re almost suffocating with all the attention.

In the case of bringing in meals, some individuals have so specific a diet that they have to turn down food offers, as anything brought in would likely go uneaten.

One woman I know concealed a health issue because she didn’t want the news to get back to her boss, who she thought would panic and (unfairly) fire her.

Then there are people who genuinely enjoy accomplishing hard tasks themselves. My husband is one—he’d rather build, refinish, and move the furniture than ask someone else to do it, simply because he delights in discovering how much he can do. And this “pull yourselves up by the bootstraps” attitude is kind of built into LDS culture, our industrious honeybee symbol leading the way. But that’s different from being genuinely unable, let’s say, to get out of bed and cook a meal or clean, yet still resisting help from loving friends.

And some people are the Family Rescuers. They’ve always been the one their whole family relies upon, the rock, the advisor, the lender, the Steady Eddie. For these people, it’s hard to reveal their own needs and weaknesses (but when they do they are invariably relieved that they can finally be “real” instead of the comic book superhero).

Last year I had a breast ultrasound that the doctor wanted to re-check in six months, in case it revealed cancer. I waited six months, got my result—I was fine—then called my children to tell them. But my daughter wished I would have shared this when it first happened, so they all could have prayed for me, supported me, and rallied around their mom. My defense was that I didn’t want to worry them all that time. My husband has been battling cancer already, and I didn’t want to add one more thing to their worry list. Besides, I’m the mom, the one they should come to for help, not the other way around. “I’m Fine—I Don’t Need Anything,” right? But in retrospect, I think she was right. It’s okay to show vulnerability. And yes, she’s the one who recommended Brown’s book.

So there are plenty of understandable reasons to resist help. And maybe you’re like someone on this list—you’ve avoided assistance for one of these, or a dozen other, reasons.

what if you’ve fallen into the category pinpointed by Brown? What if you’re swift to offer help to those in a crisis, yet refuse to let it go both ways because of pride? Some folks, when they find themselves in trouble, cannot admit to being unable to work it out alone. It’s as if they’re above that. As if, like author Brown says, they’ve attached judgment to receiving help. I think this concept warrants some soul-searching in all of us.

If you’ve ever found yourself hesitant to accept a meal or some other service from ward members, ask yourself why. Is it pride? Is it that now you’ll be seen as less than absolutely strong and perfect? Is it because you don’t want to be in that group?

This kind of pride can also keep members from seeking assistance from the church welfare program. I’ve filled out many a food order for people who express “embarrassment” and I’ve had to assure them that any one of us— truly any one of us—could find ourselves in the same situation. Ask yourself this question: If I’d think less of myself for having to get assistance, does that mean I think less of those who are receiving it?

You and I have both attended classes where compassionate service is discussed and people admit to being reluctant to accept casseroles and such (occasionally I’ve joked that I’m considering spreading the rumor that I’m going inactive just to see how many meals and brownies I can collect). But mostly, folks admit they’re reluctant to receive, though they’re always happy to give.

It sounds magnanimous, almost philanthropic. But is the underlying truth, when we are willing to do one but not the other, that we feel a measure of pity for these people? When we say, “I don’t want to impose” do we reveal the opinion that those who get help are imposing? I’m not saying it’s an absolute truth, and it certainly doesn’t apply in all cases, but it’s a concept worth considering.

We should be feeling brotherly love, the kind that knows we’re equal, and that the pendulum swings both ways. When we take someone a meal or pick up their kids or do whatever other service is needed, we should respect and admire the people in need, mentally aware that “there but for the grace of God go I.”

And then, when the shoe is on the other foot, we need to open up and share our truth with those around us. This is how to build unity and love, and allow others to feel strong and needed, instead of always weak and lacking. It’s a chance to show Christ that we really don’t judge, we honestly do want to serve the way He did, seeing everyone as His son or daughter, everyone worthy, everyone loved.

And we all know that bringing in one meal, mowing one lawn, or running one errand doesn’t solve life’s huge setbacks. But it shows love, and that’s monumental.

An additional benefit to letting our guard down is that marginally active members might stop seeing our congregations as “full of perfect families where I don’t fit in.” They’ll realize we’re living honestly, allowing one another to buoy us up when we’re sinking, and they won’t sense that glance of judgment if they don’t look or act exactly as you do. Who knows—they might come back in droves!

It takes courage and humility to let down that “I’ve got this on my own” wall. Some people find it hard just to admit they’re human. But the benefits, the genuine caring you will sense, the realization that you are loved, are well worth it.

And just for the record, I like frosted brownies with no nuts.

I give because I have been helped so many ch by others. I feel a welcomed sense of duty to help others because of help I have received. However, I do find it hard to ask for help because I always feel like I don't really have it bad enough that attention should be put on me when there are others who could use it so much more. My life really isn't all that bad.

I love Megan's comment. That's a lot the same with me. I'd also add that for me I just don't want to give the busy bodies something to gossip about. Allowing people to know what's going on with you makes you vulnerable to having the details spread through the neighborhood. I am a private person and prefer to keep it that way.