What Angels Can Teach Us About "Ministering" | Meridian Magazine 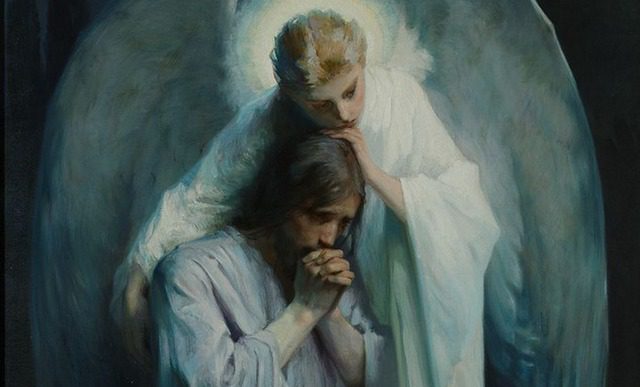 What Angels Can Teach Us About “Ministering”

The following is taken from a new book by the author entitled, ‘Ministering Sisters’. To learn more about the books by Marilynne Todd Linford, click here.

Cover image: ‘The Agony in the Garden,’ by Frans Schwartz

Like many of you, I have been thinking about ministering. My Relief Society president assigned me a companion and a few sisters to watch over. I am to minister to them according to their needs as guided by the spirit—however, whenever, and wherever. As I tried to put this new assignment into practical application, I thought about the geography that is involved. (If you are thinking, “geography? really?,” stay with me.)

All ward leaders from Primary president to bishop are limited in their service by ward boundaries. Stake leaders are the same. The stake president has no jurisdiction outside the borders of his stake. Missionaries receive a call to serve in a specific mission and, as assigned by the mission president, have authority to preach and teach in whatever area within the mission he directs. General church leaders have assigned limits. Members of the quorums of the Seventy receive changing local assignments as they organize stakes weekend after weekend. They also serve in area presidencies in locations around the world and have authority within that area for that period of time.

“The order of the Seventy… [is to] labor in the vineyard [as] necessity requires it. And these seventy are to be traveling ministers” (D&C 107:93, 97). The Apostles’ boundaries are the whole earth. “The twelve traveling councilors are called to be the Twelve Apostles, or special witnesses of the name of Christ in all the world” (D&C 107:23). Of course, the senior Apostle who is the president of the Church presides and has responsibility over the entire world. The general auxiliary presidents—Primary, Young Men, Young Women, Relief Society, Sunday School—have responsibility in the world under the prophet’s direction.

With thoughts of ministering and geographic boundaries in my mind, I was reading Mosiah 3 in the Book of Mormon. King Benjamin, speaking to his people, says: “The things which I shall tell you are made known unto me by an angel from God… [that] said unto me: Awake, and hear the words which I shall tell thee; for behold, I am come to declare unto you the glad tidings of great joy” (Mosiah 3:2-3, italics added). “What?” I thought in surprise. “I know those words!”

Luke 1:19 reads: “And the angel answering said unto him, I am Gabriel… and am sent to speak unto thee, and to shew thee these glad tidings.” Luke 2:10 quotes words the angel said to the shepherds: “Behold, I bring you good tidings of great joy.” In describing the work of angels, Alma said: “The Lord [can] send his angel to declare these glad tidings” (Alma 39:19). Samuel the Lamanite said, “An angel of the Lord hath declared it unto me, and he did bring glad tidings to my soul” (Helaman 13:7). Joseph Smith wrote: “And again, what do we hear? Glad tidingsfrom Cumorah! Moroni, an angel from heaven declaring the fulfilment of the prophets” (D&C 128:20). Alma wrote: “Angels… doth declare… glad tidings of great joy” (Alma 13:22).

As I read angels’ words, I note they use commanding words such as go, stand, speak, arise, awake, stand forth, return, fear not, prepare. I also note they often call the person being visited by name. For example, Joseph Smith said that both Father in Heaven and Moroni called him by name. Glad and good tidings and great joy, words of clear instruction, and calling the person by name is angel speak.

The angel knew where Alma and the sons of Mosiah were: “As they were going about rebelling against God” (Mosiah 27:11). The angel who appeared to Amulek knew “he was journeying to see a very near kindred” (Alma 10:7). The angel who saved the three Hebrew men in the fiery furnace stood in the furnace with them. “Nebuchadnezzar… said, Blessed be the God of Shadrach, Meshach, and Abed-nego, who hath sent his angel, and delivered his servants” (Daniel 3:28).

How angels travel to and from geographic assignments is also an interesting topic. Jacob, son of Isaac, saw “a ladder [conduit, channel], set up on the earth, and the top of it reached to heaven: and behold the angels of God ascending and descending on it” (Genesis 28:12). The Lord (angels) went before the Children of Israel to lead them through the wilderness “by day in a pillar of a cloud… and by night in a pillar of fire, to give them light” (Exodus 13:21). When Nephi and Lehi, the sons of Helaman, were in prison, they conversed with angels. Three hundred people witnessed it.

The record says “they were encircled about, yea every soul, by a pillar of fire…. and they saw the heavens open; and angels came down out of heaven and ministered unto them” (Helaman 5:43, 48). Joseph Smith saw “a pillar of light exactly over my head, above the brightness of the sun, which descended gradually until it fell upon me” (JS-History 1:16).

About Moroni’s visit Joseph said: “I discovered a light appearing in my room, which continued to increase until the room was lighter than at noonday, when immediately a personage appeared at my bedside, standing in the air, for his feet did not touch the floor” (JS-History 1:30). Joseph Smith confirmed: “angels… reside in the presence of God” (D&C 130:7), which I assume is quite a distance away. I enjoy thinking about the benefits of interstellar travel.

I also enjoy thinking about the possibility of angels being set apart or assigned to minister to a specific person(s), at a specific place, for a specific purpose, at a specific time. I wonder if some of their assignments are temporary, others ongoing. I’ve thought that perhaps angels are sent to places they knew while they lived on earth, like Moroni was. Joseph Smith explained: “There are no angels who minister to this earth but those who do belong or have belonged to it” (D&C 130:5).

The fact that angels come with authority goes without saying. The angel who appeared to Alma the son of Alma explained the purpose of his visit: “I come to convince thee of the power and authority of God” (Mosiah 27:14). When Zacharias doubted the angel’s words and asked for a sign, the angel answered with a stern rebuke: “I am Gabriel, that stand in the presence of God; and am sent to speak unto thee” (Luke 1:19).

Angels bear testimony: “And entering into the sepulcher, they saw a young man sitting on the right side, clothed in a long white garment; and they were affrighted. And he saith unto them, Be not affrighted: Ye seek Jesus of Nazareth, which was crucified: he is risen” (Mark 16:5-6, italics added). At the ascension, two men dressed in white apparel said: “Ye men of Galilee, why stand ye gazing up into heaven? this same Jesus, which is taken up from you into heaven, shall so come in like manner as ye have seen him go into heaven” (Acts 1:11, italics added).

Angels in scripture are male, but I am absolutely sure there are female angels. I like to think there were many female angels who appeared to the shepherds to announce the Savior’s birth and many who ministered to the children when the Savior visited the Nephites.

Emily H. Woodmansee (1836-1906) wrote the words to hymn 309, “As Sisters in Zion.” Her phrase: “The errand of angels is given to women” highlights a truth we innately know and have experienced. Now with the changes to home and visiting teaching, men and women are both officially assigned to minister, which is the errand of angels.

Like angels, we minister in the Savior’s way—loving, empathizing, reclaiming, rescuing, caring, understanding, comforting, helping, sustaining through rough times, bringing and speaking glad tidings. “In all their affliction he was afflicted, and the angel of his presence saved them: in his love and in his pity he redeemed them; and he bare them, and carried them” (Isaiah 63:9).

Although I love the thought of interstellar travel, I have always taken comfort in the thought that the spirit world was right here with us and that our heavenly "home teachers" were souls who have a vested interest in us. Love the article.

Yes, there are ministering angels that are women. It made sense to me as it happened to me. I have a brother who passed away many years ago, and I thought it would be him - -if I ever received a ministering visit from the other side of the veil. When it was my Grandmother, I realized "Of course! Women ministering to women," I had only known her as "old" and worn out from a life of hard work, so I was confused when I saw her in my room. She was beautiful. Love radiated from her being and filled my soul. This event stayed with me and strengthened me for years. It was at a very tough time in my life - which was about to take a hard turn for the worse. I prevailed and survived drawing on the power of the Spirit of the Lord and this nurturing ministering visit from my Grandma Emma.