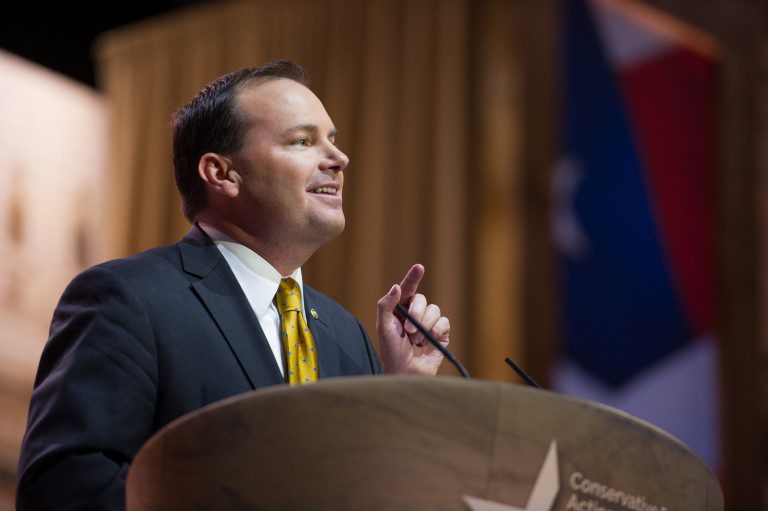 Utah Senator Mike Lee has served in the United States Senate since 2010. He is the son of Rex E. Lee who was the United States Solicitor General during the Reagan administration and the tenth president of Brigham Young University.

“My late father was diagnosed with stage 4 cancer—Non-Hodgkin’s lymphoma to be precise—in the summer of 1987. I had just finished my sophomore year in high school when he was diagnosed, and we didn’t know whether he was going to make it through the year. A lot of the doctors had supposed and suggested strongly that he wouldn’t survive it,” Senator Mike Lee said.

Before Lee knew about his father’s condition, he had applied to be a Senate Page for the coming fall semester of his junior year of high school in Washington D.C. Though his family lived in Provo, Utah, he had accepted a position in the Senate Page Program, which employs juniors and seniors in high school to help senators with their daily tasks and is highly prestigious and competitive. But Lee would not go to D.C. alone.

“The National Institute of Health, based in Bethesda, Maryland, was doing some experimental research on treating the very specific cancer that my dad had. Just coincidentally, he found out this was available right at the time he was diagnosed, just before they were about to start his chemotherapy treatment in Utah. They were using some very aggressive, cutting-edge treatments that weren’t being used elsewhere, and they considered him a good candidate for it because of the advanced stage of his cancer. He otherwise was probably going to die.”

“He came back East to the D.C. area to be treated, and, as it worked out, my time as a Senate Page overlapped with some of the time he was out here being treated. On weekends I would go up and see my dad when I wasn’t working and visit with my parents.”

Though Lee made many great friends in the Senate Page Program that he could confide in about his dad’s condition, he was wracked with the unknown of whether his father would still be alive for Christmas.

“Expressions of deep emotional vulnerability are not exactly the strong suit of most teenage boys. Even when they need to, they avoid such things like they would avoid a land war in Asia or a nuclear winter, and so that [made] it kind of hard.”

Three weeks before Christmas, Lee’s father was released from the hospital and his parents went home to Utah.

“I remember missing them badly. He wasn’t out of the woods yet—he was still very sick—but we had all prayed for six months about nonstop that he would be spared. We knew some how that if he could make it to Christmas that he would be turning a big corner.”

It was then that Lee remembered a dream he had had earlier in the year before his dad had even been diagnosed. In the dream, he saw his whole family gathered around the Christmas tree, talking about how happy they were to be together and that his dad was ok.

“I had not a hint of reason to believe that my dad was sick at the time. Nobody did. He was in perfect health, he was running 5 or 6 miles a day, and was in great shape. But I had this dream that all of a sudden it was Christmas time and we were all expressing gratitude around the Christmas tree about the fact that my dad was alive. It completely freaked me out.”

When he was finally home from Washington D.C. with his dad, he realized that the dream that he had had came to fruition. His dad’s cancer was in remission and they were together for Christmas.

I arrived at BYU from France in 1978 and ended up in the Stake that had Rex Lee as a President. I was impressed with his leadership. Then I would run into him doing his morning joggings. I was impressed when President Reagan called him as Attorney General. Then I was impressed when he would deliver awesome speeches while he was already very ill as BYU President, which I followed on the Internet. I remember President Hinckley on the occasion of his funeral saying something like, "If you Brethren could pattern your lives after his, you would be acceptable in the eyes of the Lord," and I got there another confirmation that he was a Prophet of God, because that's how I exactly felt at the time.

This is for Geoff. I had Hodgkins and am an active member. At the time, I was told that it would be a good idea to have a ward fast. I felt that it wasn't necessary because if it was my time to go, I would go. If it was to remain on the earth, I would stay. I do believe that we have a very loving Father in Heaven who desires to bless his children with the desires of their hearts. I did plead with him that I may live to raise my children if it was his will as I am sure many of my family did. In that process I came to know of his love for me. It allowed me to have faith that whatever was his will I could accept. The prayers were a blessing for me. I came to know my God. It made that hard journey worth it!