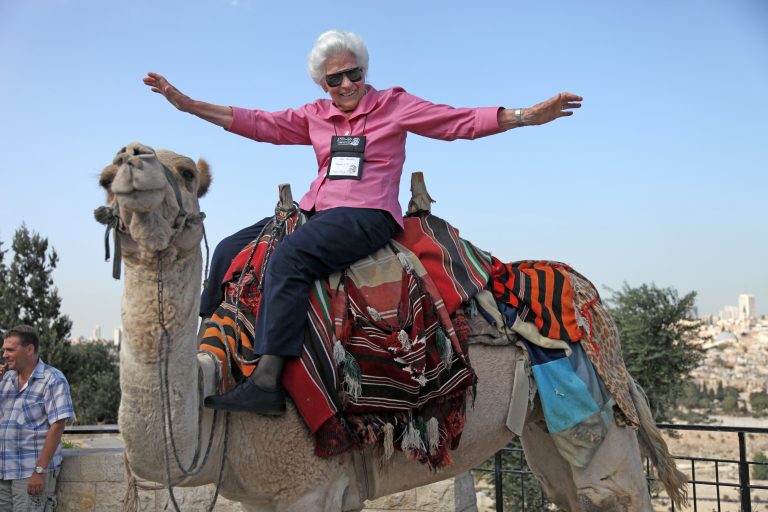 Seven Things I Learned from My 100-Year-Old Grandma

We had dinner with my 100-year-old, incredible Grandma Martha on a Monday evening, laughing at my nephew’s baby giggles and squeezing her hand with love when she just couldn’t hear us. It felt so normal—just another dinner. But the next day she lost her balance and fell in her kitchen, breaking her pelvis, and a few short days later she passed away.

Some may say, “Oh, she lived a good long life. It was just her time,” but Grandma was immortal to me, passing through every setback with resilience and joy and living and living and living. It felt like she would just be there with us forever, always there to wave goodbye on her porch until we had driven out of sight. At 93, she rode a camel in Jerusalem and at 98 she was still taking care of her husband and living in her own home. In fact, at 100 she was living in her own home by herself.

Though I grew up on the other side of the country from her, I loved her from afar, and when we moved to Utah and I started school at BYU, she became my escape from the stress of college. Her home was like a temple to me, always filled with the Spirit. I knew I could come to her to talk about anything and she would have something profound to say that would improve my outlook. Her closeness to Father in Heaven brought anyone in her presence closer to Him. She was the greatest type of Christ I’ve ever known. I often found myself jumping into my car after a visit with her on her white couches, my hand still warm from holding hers, and typing something she said onto a note on my phone so I could remember it always. Here are just seven of those lessons she taught me that I hope will live on in me, even though she has graduated from this mortal life:

“There is Joy to be Found in Every Stage”

When I felt lonely my freshman year of college, I went to her feeling completely sorry for myself. I had braces, I had recently had jaw surgery and my face was swollen and foreign to me, I felt deeply self-conscious and no one was asking me on dates. Instead of pitying me, she told me that every season has its challenges but each stage also has many things to be grateful for. There is joy to be found in every stage of life no matter what stage you have left behind or what stage is yet before you.

That was a motto she truly lived by. She found joy living on a farm in small-town Missouri; some of her fondest memories were from living in a trailer in Indiana during my Grandpa’s graduate school years when she had to share pots and pans and baby clothes with neighbors to get by; and she gave her all as a sister missionary in the Central States Mission when she was the only sister who knew how to drive a car. She faced challenges squarely, knowing she could weather any storm with God on her side. God was and is her dear friend.

The Courage to Love

When she was going to meet my Grandpa’s family for the first time, he warned her not to greet with her traditional hug and kiss because that was just not how his family was. She heard him out, but when they arrived at his family home, she walked right in and held nothing back, giving each person a hug and kiss anyway. She didn’t let pretenses or the thought of what others might think stop her from loving wholeheartedly. Whether it was her friend of many years or a stranger coming to her house for the first time, she greeted everyone with love and familiarity. I think it is for this reason that she became the only woman to ever drive her father-in-law’s car. He trusted and loved her because you couldn’t help but love her. Her warmth permeated every heart.

Be a Gathering Place

When a new family moved in to the neighborhood with young boys the same age as her sons, Grandma gathered them all to go spelunking (a popular activity in Missouri, the land of caves). She was the spelunking mom, even when Grandpa wasn’t around to help wrangle their pack of boys. After having fun exploring in the mud, one of the neighbor boys started crying, fearing what his mother would do if he came home covered in mud. My Grandma said not to worry, and promptly took him around back to hose him down.

This family ended up joining the Church because of the fellowship she gave, mothering children she didn’t even birth, and making her house the gathering place for neighborhood kids. She had regular popcorn ball parties, bringing kids from town out to the farm. Living so far removed from everyone made those who did come out to the farm a deliberate group—the group to influence her young boys. She often fed the missionaries and entertained guests from 60 different countries over the years, giving her sons a view into many cultures and people right there on their rural Rolla, Missouri farm.

It was in that remote haven where she began generation-spanning traditions that still permeate our family culture. She was famous for her gingerbread house decorating each Thanksgiving, baking and assembling 35+ gingerbread houses. She also brought a Danish tradition into the family of dropping an almond into a big batch of rice pudding and everyone eating it until someone found the almond. These traditions brought us all together to laugh and joy in each other.

My Grandpa was a world-renowned geologist, teaching at multiple universities, spending two years living in Ankara, Turkey, helping get the first man on the moon, and traveling all over the world for his expertise. Though she was busy running a household, serving in the ward and community, directing community theater and, at one point, running an interior design shop, she also made it a point to go with my Grandpa on many of his geology expeditions, not only for the gratifying adventure, but so she could learn more about geology and support her husband in his career. She learned all she could about rocks so she could be a true geologist’s wife. As I was dating various people throughout college, she reminded me that no matter who I married and what kind of career he had to really be their wife. “If you marry a doctor, be a doctor’s wife. If you marry an entrepreneur, be an entrepreneur’s wife.” Likewise, my Grandpa married an entertainer of guests and someone who took everyone in as her own. He was the Good Samaritan’s husband.

One day during college, I came over to tell Grandma about some of my insecurities I had over a boy I was dating. I wasn’t sure if it was right to move forward in the relationship or if we liked each other enough. With all of these questions swirling in my head, she gave me a simple, yet memorable line: “If it is to be, it will be. If it is not to be, it won’t, and that’s ok.”

Instead of ruminating myself into a hole, her short phrase made me realize that no matter how hard I thought about the situation, God had a plan for me and whatever happened would be a blessing in the end. If it didn’t work out with this boy (which it didn’t), it would be ok because there was another situation that would be that was better (which it was). Side note, it really was ok that every boy I told her about didn’t work out, because the one boy I ended up marrying visited her without my knowing, just to hold her hand and get to know her. Of him, she said, “This man must have wings…and all the other things that angels have!”

“I am Not Lucky. I am Blessed”

With all the love and warmth, she once told me, “I am so blessed. If anyone says I am lucky I will pop them on the nose. I am not lucky. I am blessed.” Though I could never imagine my white-haired glowy Grandma “popping” anyone on the nose, she was so acutely aware that she was blessed every day of her life. She woke up filled with gratitude for another day—not that she was “lucky” to have made it through another night but that she was blessed that Heavenly Father granted her breath for another morning. Nothing was lucky to her. She was blessed in all things.

“I Make Other People’s Lives My Business”

My Dad asked Grandma (his mother) once why everyone felt so loved and comfortable around her. What was her secret? She thought a few days about this question, and when she finally gave him an answer it was this: “I make other people’s lives my business.” She didn’t wait to be called upon or assigned. When a missionary came down with the mumps, she called the mission president and said, “Your missionary has the mumps and I am going to take care of him at my house. Good day.” That missionary stayed with them for a month and is a family friend to this day. When a new mother broke her leg, she was there to help with the baby and the house. When a woman in the neighborhood had deep depression, she visited her every day for three years.

She was not just a beloved Matriarch in her family, she was an extraordinary woman, influencing thousands in her life and helping them to see a glimpse into who Jesus Christ is. I know that is who she was to me.

She made my life her business, setting the goal to live long enough to see me have my first child. She set this goal before I was even dating anyone. Though she won’t be here in body for that day, I know she is in the spirit world with our children and they will be that much more golden for knowing her post-mortal, glorious self.

WHAT A SWEET STORY! I WISH I COULD HAVE KNOWN HER! WHAT AN AWESOME TRIBUTE TO A BEAUTIFUL PERSON. THANK YOU FOR SHARING HER!

Martha has been a beloved member of our ward for years, and each of us felt individually loved by her. She did indeed make people her business. If we went to visit her, she focused her full attention on us. She was always interested in what was going on around her. I recently found some pictures of families from the ward we lived in while we were in Indiana those many years ago. I was a very young child at that time, but I have known that Martha and I shared that time. After scanning the pictures and posting them on FamilySearch for various families to enjoy, I took the pictures to Martha, who expressed great pleasure in seeing these pictures of wonderful friends and families.