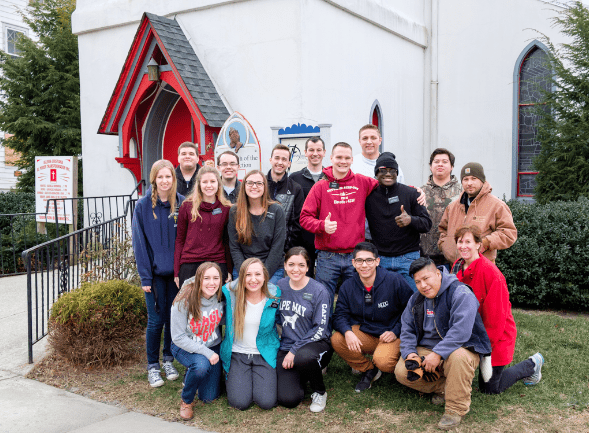 Service is at the Heart of Missionary Work

Dear Friends,As missionaries in Bridgeton, a small town in South Jersey, we are privileged to participate in service which helps build relationships between church members and many great individuals in the community. The mayor of Bridgeton, Albert Kelly, is a wonderful civil servant who works tirelessly to bless the people he serves. During the winter months, there are many cold nights and because of this, the Code Blue program which was initiated by the mayor, and by Reverend Weinstein, the pastor of a local congregation.

On the evening of December 9th, 2013, Mr. Hanshaw, a homeless man, suffocated to death becoming trapped in the Salvation Army Clothing Drop while looking for warm clothing and shelter from the cold. The Mayor and others determined to never let that happen again. Three congregations in Bridgeton now rotate the Code Blue duties each week during the winter months. On nights where the temperature reaches 25 degrees or lower, the homeless are welcomed inside the designated church where they have their own cot with bedding to sleep for the night. They are also fed and are able to shower. A few months ago, the youth of the LDS Bridgeton Branch delivered $1,000 worth of food items (from the Bishop’s Storehouse) to one of the Code Blue participating chapels and the youth were taught first hand about the Code Blue program by Mayor Kelly and Reverend Weinstein. More recently, Mayor Kelly asked for volunteers to give service on Martin Luther King Jr. day to benefit the churches that run the Code Blue program. We were surprised at the turnout, from branch members, from the community and especially from the missionaries in the Cherry Hill zone. The first photo above shows many volunteers who had gathered to give service. While gathered, the mayor and several others gave short talks of inspiration and asked volunteers to share their own dream (as Martin Luther King, Jr. had done) with the group. Several shared their dreams of wanting the make their lives and the community better. After several had shared their dreams, Sister Miller bravely raised her hand and stepped forward (photo below) to share her dream. She introduced herself as a member of the Church of Jesus Christ of Latter-day Saints. She said her dream was to share the gospel of Jesus Christ and to have love and unity among all churches, people, nations and races.

Sister Miller and I were touched by the sacrifice of so many missionaries who gave up their preparation day time to come serve what the mayor always refers to as “The Great City of Bridgeton.” Including Sister Miller and me, there were 16 missionaries who came to serve. Some of these young missionaries traveled an hour each way, in addition to giving service, on their preparation day which is normally reserved for their errands, emails and more casual activities. We also had 11 branch members join us. I think the organizers were surprised at the large turnout and frankly they were not ready to dish out meaningful assignments to all who were there. I was proud of our missionaries who went to work finding meaningful service, well beyond what had been planned. For instance, there had not been plans to clean up outside but we made a major impact on the cleanliness of the grounds of the chapel.

The photo at the top shows all the missionaries who came from afar to help this morning. As a bonus, one of the members came with her boyfriend who had previously investigated the Church. The morning of the service event he said he is ready to be baptized and asked Elder Warr, one of the young missionaries in Bridgeton to baptize him!It is a privilege to serve a full-time mission. I am very grateful for circumstances that have allowed this blessing in our lives. Thank you for your love and support of our family and friends.God bless each of you,Elder Miller