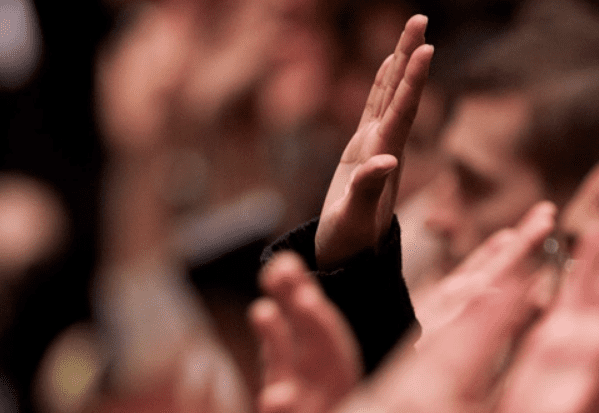 On the Sacred Act of Raising Your Arm to the Square

Together, we again experienced raising our arms to the square to sustain a new prophet and other leaders of The Church. We have heard countless mini-sermons encouraging us to sustain those called in our wards and stakes, signified by raising the right arm to the square.

Elder J. Golden Kimball is noted to have said, “It has been proposed,” he said, “that we sustain Brother Heber J. Grant as prophet, seer, and revelator of the Church of Jesus Christ of Latter-day Saints. All in favor make it manifest by the raising of the right hand; opposed, if nay, by the same sign. . . . It has been proposed that we sustain Brother Anthony W. Ivins, as. . . .” On and on it went, monotonous and tiresome like the ticking of a clock. J. Golden looked up from his list and noticed that his audience was nodding, on the very verge of sleep. In the same monotonous tone he continued: “It has been proposed that Mount Nebo be moved from its present site in Juab County and be placed on the Utah-Idaho border. All in favor make it manifest by raising the right hand; opposed by the same sign.1

Elder Loren C. Dunn explains the significance of this physical action: “To sustain is to make the action binding on ourselves and to commit ourselves to support those people whom we have sustained. When a person goes through the sacred act of raising his arm to the square, he should remember, with soberness, that which he has done and commence to act in harmony with his sustaining vote both in public and in private.”2

One legal historian notes: “Now, bringing an arm to the square has a meaning. A square is a four equal sided geometric figure. If you raise an arm “to the square” then your arm has to represent two sides of the square. That means it will be at a 90-degree angle. The right arm will be held straight up. This indicates truthfulness, honesty, candor and frankness. That is the meaning of holding your arm to the square.”3

The historical origin is not clear legalistically or religiously, but it is interesting to note this from Isaiah more than 700 years before Christ:

“Therefore thus saith the Lord God, Behold, I lay in Zion for a foundation a stone, a tried stone, a precious corner stone, a sure foundation: he that believeth shall not make haste. Judgment also will I lay to the line, and righteousness to the plummet: and the hail shall sweep away the refuge of lies, and the waters shall overflow the hiding place.” Isaiah 28:16-17

We are judged by our works, so our works or behavior is laid to the horizontal (the line) and the standard that sets righteousness is then determined by the plummet. But what on earth is a plummet? The Hebrew word used here is mishqeleth meaning a weight with a line attached. Turning a few pages we find Isaiah prophesying latter-day doom using this same symbol:

“But the cormorant and the bittern shall possess it; the owl also and the raven shall dwell in it: and he shall stretch out upon it the line of confusion, and the stones of emptiness.” Isaiah 34:11

The parallelism is evident juxtaposing two birds with two other birds: owl and raven. Then he uses a repeated couplet juxtaposing “line of confusion” with “stones of emptiness.” The word for stone is again describing a plumb line. The doom here comes from removing the stone from the plumb line leaving the string or “line” free to be “tossed to and fro, and carried about with every wind of doctrine”4 . So, what is the stone? Back in chapter 28 the “stone” was to be a “corner stone”, “a sure foundation”. The Apostle Paul identified Christ as that corner stone,5 as did Peter.6 So, without Christ, the standard of righteousness becomes confusion, leaving us with no measurement by which to judge our behavior.

Raising our arm to the square becomes, then, a form of commitment whereby we show that our behavior, our works will “square up” to the standard from heaven as established by our foundation stone, Jesus Christ. It is a sign of our oath of integrity we give before God, as measured against the divine standard to which we bind ourselves.

No, Mount Nebo did not get moved, in spite of the vote and many chuckles from those still cognizant for this classic JGK proposal.

I always thought that a covenant of arm to the square meant that what you promise you promise before heaven and earth.