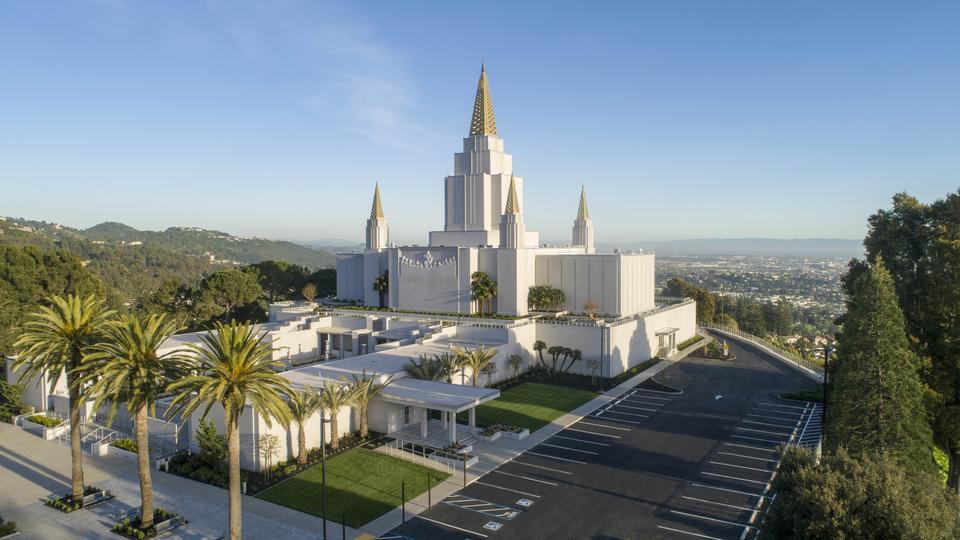 Oakland California Temple Opens Doors to the Public After Renovation

The public is invited to tour the newly renovated Oakland California Temple of The Church of Jesus Christ of Latter-day Saints. The open house will take place Saturday, May 11, through Saturday June 1, but will be closed on Sundays (May 12, 19 and 26). Reservations for free tours can be made through templeopenhouse.ChurchofJesusChrist.org.

The temple, located at 4770 Lincoln Ave. in Oakland, will be formally rededicated on Sunday, June 16, in three sessions. Prior to the rededication of the temple, a youth devotional will be held on Saturday, June 15.

The Bay Area was home to Elder Quentin L. Cook of the Quorum of the Twelve Apostles and his wife, Mary, for more than 30 years. This week, Elder Cook and Elder Gary E. Stevenson, another member of the Quorum of the Twelve Apostles, are leading tours of the renovated temple for local community leaders. “It’s a real thrill to see [the Oakland California Temple] be rededicated, to see it be refurbished,” Elder Cook said. “And it has a place in my heart that’s very, very special, so I’m very grateful for it.”

A temple open house is important, Elder Cook said, because “everybody gets to see what’s inside, [which] eliminates the feeling of, ‘What is going on in there?’ And they learn about it.”

The Oakland California Temple was the Church’s 13th temple when President David O. McKay (1873–1970) dedicated it on Nov. 17, 1964. The temple was the second in California (following the Los Angeles California Temple) and currently serves Latter-day Saints from 31 stakes in Northern California. The temple is one of seven temples in the state, with an eighth announced in Yuba City. There are currently 209 temples operating, announced or under construction throughout the world.

Building on the Vision of Architect Harold W. Burton

The Oakland California Temple is a unique example of modern Church architecture. The original architect, Harold W. Burton (1888–1969), drew on his lifetime of designing buildings for The Church of Jesus Christ of Latter-day Saints while simultaneously incorporating the best of modern design prevalent in the 1960s.

“He wanted to celebrate things like air conditioning and artificial lighting and these technological breakthroughs that had been happening in the first half of the 21st century. So, he incorporated a windowless building,” said Emily Utt, historic sites curator for the Church History Department.

The temple’s main floor now includes a waiting area and one of the only areas with windows.

“In the morning, the sun will rise through the windows. It never had that in this building before,” said Church Special Projects Department senior project manager Chris Robbins. “It’s kind of back to where we thought, ‘If Burton had these features or this opportunity, he might have done this.’”

Burton’s original design also included water cascading down from the second-level garden terrace into a courtyard reflection pool. This feature was removed in 1969 because of irreparable leaks. Thanks to modern-day materials and technology, the waterfall was restored in the renovation. Visitors will now enter the building by walking under the waterfall to access the front door — a look Robbins describes as “stunning.”

The original temple exterior points to Jesus Christ and the diversity of the area. The relief sculpture on the north side ornaments the building and depicts Christ teaching as found in Matthew 5 and 6. The relief sculpture on the south side shows the Savior as described in 3 Nephi 11 of the Book of Mormon. And Burton’s five-spire design hints at buildings in the Far East, such as the Taj Mahal in India and Angkor Wat in Cambodia, and reflects the diversity of Northern California’s residents.

True to the intentions of the modern era, the interior of the temple is carefully restrained in its ornamentation. The fineness of the natural material enhances the symbolic progression of the sacred space, each material minimally altered and finished to show its intrinsic beauty. This is evident in the use of wood and stone, where clean, geometric designs are used sparingly. The original woods are not stained, only sealed, to show the original color and grain.

The temple’s interior materials come from around the world. The flooring stone is from Greece, China and Georgia. Paints were manufactured in California and Ohio, and decorative painting was done by companies in Utah and New York. Lighting was designed by companies in Minnesota, New York and Utah. The doors of the celestial room are primavera wood from South America, and some sealing rooms feature ribbon-striped mahogany from Africa. All doors have custom bronze hardware made of Indian brass. The original artwork in the temple is from Italy and Utah.

Temples of The Church of Jesus Christ of Latter-day Saints differ from chapels where members meet for Sunday worship. A temple is considered a “house of the Lord,” where Christ’s teachings are reaffirmed through sacred ordinances that unite families for eternity. Inside, members learn more about the purpose of life and make covenants to serve Jesus Christ and others.