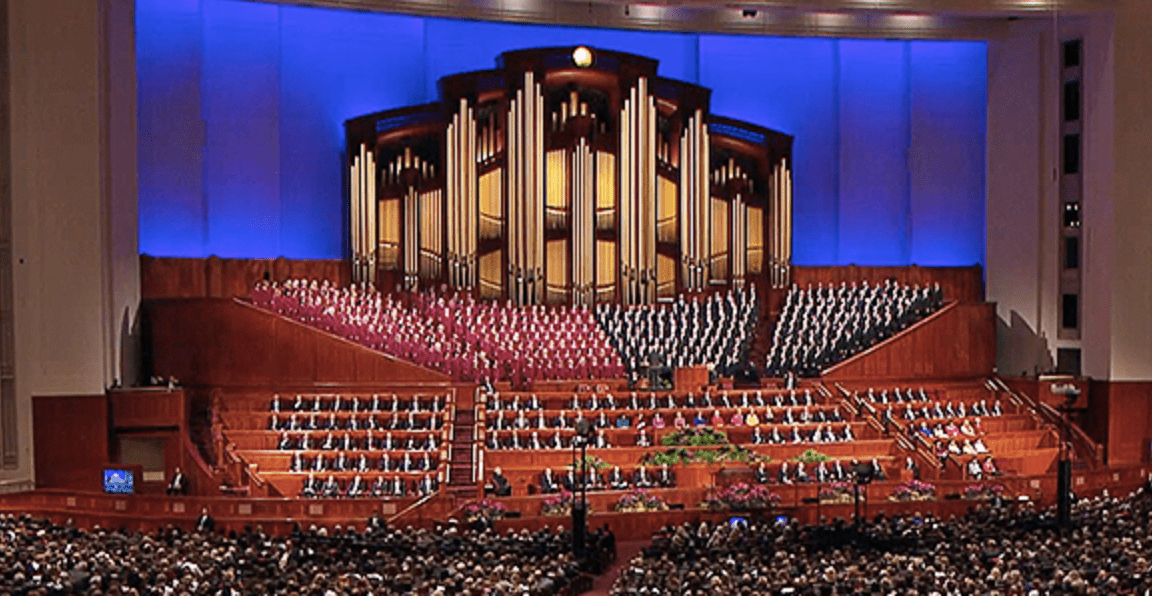 When I was eleven, my maternal grandparents David F. and Emma Geneva Huish Haymore, who lived in Arizona, came for a visit to our home in Salt Lake City. One evening Granddaddy asked me if I would like to go to General Conference with him the next day. He told me he had been asked to give one of the prayers. He showed me a letter notifying him that he was to pray and telling him that he could bring one person with him. “Doesn’t Grandmother want to go?” I said. “No, he answered. “We think it would be a good opportunity for you.” And it was. I sat beside him on the front row in the Tabernacle. I felt honored but nervous as I sat under the kind but powerful gaze of President David O. McKay.

October 2015 yielded an entirely different conference experience. A thousand miles from home some of our family—grandparents, parents, grandchildren—crowded into a hotel room to watch General Conference on a computer. Perhaps it was the closeness in physical proximity, the girls sat on one bed and the boys on the other. Perhaps it was the spiritual closeness as we were not vacationing but in that city to participated in a long-hoped-for marriage.

Whatever the external factors, we were surrounded by family and the Spirit. We watched one session, ate a picnic lunch in the room, and watched another session. The Tabernacle Choir sang the closing song, “Let Us All Press On,” singing three verses and three choruses and then adding a tag: “But an unseen pow’r will aid me and you in the glorious cause of truth. Cause of truth.” Since that experience when my daughter and I email something spiritual to each other, we recall that sacred moment with #causeoftruth.

Singing the hymns of the Restoration—“We Thank Thee O God for a Prophet,” “How Firm a Foundation,” “Praise to the Man,” “Now Let Us Rejoice,” “Redeemer of Israel,” “High on the Mountain Top” with twenty-one thousand in the Conference Center thrills those who are privileged to be in attendance. Singing along at home or in a stake center also carries the Spirit and provides a spiritual foundation upon which the spoken words build. The Tabernacle Choir and other invited choirs give their own sermons as part of the General Conference symphony.

One of my favorite talks this past conference combined words and music. President Russell M. Nelson was the final speaker in priesthood session. In closing his talk he encouraged, challenged, invited, and reminded Melchizedek Priesthood men: “There are doors we can open, priesthood blessings we can give, hearts we can heal, burdens we can lift, testimonies we can strengthen, lives we can save, and joy we can bring into the homes of the Latter-day Saints—all because we hold the priesthood of God….

“Tonight I invite you literally to rise up with me in our great eternal brotherhood. When I name your priesthood office, please stand and remain standing. Deacons, please arise! Teachers, arise! Priests! Bishops! Elders! High priests! Patriarchs! Seventies! Apostles!” Now, brethren, will you please remain standing and join with our chorus in singing all three verses of “Rise Up, O Men of God.” Momentum grew as each office stood and filled the Conference Center with unifying, reverberating priesthood power. (To watch the video, go to lds.org, general conference, October 2018, priesthood session, and fast-forward to President Nelson’s talk.)

Depending on your age, you may have memories of talks you can still hear in your mind—President Ezra Taft Benson’s tremulous voice challenging the Church to flood the earth with the Book of Mormon, or President Howard W. Hunter’s almost whispering voice imploring faithful members to have a current temple recommend no matter how far they live from the nearest temple, or President Gordon B. Hinckley in his articulate way, reading “The Family: A Proclamation to the World” for the first time in General Relief Society Meeting, or when he announced small temples and the rebuilding of the Nauvoo Temple.

Will you ever forget President Thomas S. Monson’s announcement of the change in age for young men to eighteen and young women to nineteen for full time missionary service or his final admonition to read the Book of Mormon daily? Do you recall Elder Jeffrey R. Holland’s passionate plea while holding in his hand the very Book of Mormon that Hyrum Smith read from while in Carthage Jail just hours before he and his Prophet-brother were martyred?

Can you hear in your mind Elder Joseph B. Wirthlin quoting his mother’s phrase, “Come What May and Love It,” and Elders Bruce R. McConkie, David B. Haight, and Neal A. Maxwell giving their last conference testimonies? Will anyone ever forget President Deiter F. Uchtdorf’s references to his love for flying in most every talk, President Russell M. Nelson’s heart talks, and President Monson’s eighty-five-widow stories? One thing I personally look forward to is when President Henry B. Eyring conducts. He says nothing until he first kindly smiles at the congregation.

There is no substitute in all the world for living Apostles and prophets. They have keys and responsibilities to communicate the will of a living Father in Heaven. When President Spencer W. Kimball was the prophet, President Benson said, “The living prophet is more important to us than a dead prophet….God’s revelations to Adam did not instruct Noah how to build the ark. Noah needed his own revelation. Therefore, the most important prophet, so far as you and I are concerned, is the one living in our day and age to whom the Lord is currently revealing His will for us”.

Apostles and prophets have a hard job. Think of the Apostle John who was exiled to a desolate eleven-square-mile island. Think of Abinadi who was burned at the stake because he wouldn’t recant his teachings. Think of Jeremiah who was attacked by his own brothers, beaten, put into the stocks, harassed, imprisoned by the king, thrown into a pit, and, some believe, stoned to death. Think of Moses wandering in the wilderness for four decades leading several million oft-recalcitrant people. Think of Joseph Smith in Richmond Jail, Liberty Jail, Carthage Jail, and who today, 198 years after his First Vision, is maligned relentlessly.Think of the travel ninety-four year old President Nelson courageously endures. Think of him leading more people than Moses did through the wildernesses plaguing society today.

No one chooses to be a prophet. From the moment a prophet is called, his life is no longer his own. In our time, even though there are millions of faithful members who honor and pray for President Nelson, there are billions who do not. Prophets are often unpopular because their words offend the wicked and discomfort those who are at ease in Zion. Most who listened to Jesus Christ “were offended in him” (Matthew 13:57).

If directed by the Lord, prophets speak hard words. After Nephi died, his brother Jacob became the prophet and spoke to the people at the temple in a general conference of sorts. Jacob explained that he had received specific instruction from the Lord: “Jacob, get thou up into the temple on the morrow, and declare the word which I shall give thee.” As Jacob realized the subject of his talk, he knew it would sadden the women and children in the congregation “whose feelings are exceedingly tender and chaste and delicate.” He was told to speak to the men about their iniquities—their “grosser crimes.” Did he want to speak to that subject? No. He said he would rather have spoken “the pleasing word of God,” but he had no choice. (See Jacob 2.) A prophet must do as the Lord directs or he is removed. God will have the people taught His will.

At least eight times in the New Testament Jesus teaches a doctrine and then invites His listeners to hear His words. He gave this parable:

“A sower went forth to sow; And when he sowed, some seeds fell by the way side, and the fowls came and devoured them up: Some fell upon stony places, where they had not much earth: and forthwith they sprung up, because they had no deepness of earth: And when the sun was up, they were scorched; and because they had no root, they withered away. And some fell among thorns; and the thorns sprung up, and choked them: But other fell into good ground, and brought forth fruit, some an hundredfold, some sixtyfold, some thirtyfold. Who hath ears to hear, let him hear” (Matthew 13:3-9).

Only the hearer can decide what happens to the words spoken by the Savior or His servants. Some hearers let the words fall by the wayside or on stony or thorny ground or allow the sun to scorch fragile roots. Some figuratively plug their ears so as not to hear the symphony. Some criticize and find fault; some pick and choose like in a cafeteria line; some are open slates as was the boy Samuel who said: “Speak Lord, for thy servant heareth” (1 Samuel 3:9).

Jesus, The Sower, testified that He has sown His word through all dispensations, in person and through His prophets. “What I the Lord have spoken, I have spoken, and I excuse not myself; and though the heavens and the earth pass away, my word shall not pass away, but shall all be fulfilled, whether by mine own voice or by the voice of my servants, it is the same”  (D&C 1:36-38).

Over the last week, especially, I have felt such an intense need to hear the words of our living Prophet, President Nelson and all of our leaders—intense as in, my spirit needs this the way my body needs air! As a mother of non-traditional learner triplets, I am forever grateful for the MANY ways messages from our Savior, Jesus Christ, can be delivered through the miracles of modern technology. What a HUGE blessing!