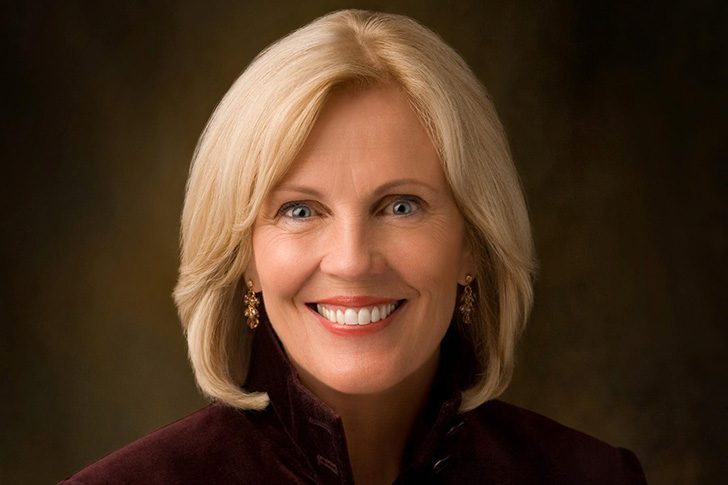 Elaine S. Dalton is the former Young Women General President who served from 2008-2013.

Elaine had passed the jewelry store for weeks, admiring the little silver bell with a diamond clapper that hung on a chain in the window. Her family was not wealthy and could not afford such an extravagant gift, but that necklace was the present she wanted most for Christmas.

As she walked in town one day, she passed the familiar window, and to her dismay the bell was gone. “Well that’s the end of that,” she thought, feeling disappointed and walking on.

Christmas morning came and Elaine’s family gathered in the living room to open presents. She dug through her stocking and was astounded to find a little box in the toe of her stocking. Inside was the little bell necklace.

“It was like a miracle to me. I knew my dad must of saved money and done all kinds of things to make that happen,” Elaine said.

She treasured this gift, not only for the intrinsic beauty it had but for the sacrifice she knew it took her dad to buy it for her. Little did she know that two months before the next Christmas, her father would pass away—that was the last material gift he would give her.

Elaine was only 18 and her father, Marvin Schwartz, only 45 when he got a cough. Elaine would come up often from BYU to Ogden where her family lived to visit him in the hospital and he told her he was proud of her and to be a good girl. She never imagined that this seemingly inconsequential sickness would take him from her. After a month, he died of what the doctors pronounced viral pneumonia.

The Christmas after he died, they worked extra hard to make it a happy holiday. Each of her siblings and mother wanted to get each other thoughtful presents that would make them especially excited. Elaine recalled they had never bought so many presents as they did that year.

Christmas morning came, and everyone once again gathered in the living room to open presents, just as they did last year. There was joy in the air as they found special gifts from each other under the tree, but even with a semblance of a happy Christmas morning, in one moment everyone looked at each other and began to weep.

“We knew that the presents weren’t going to fill the void, and that really what we wanted more than anything was not presents, but our father’s presence,” Elaine said.

As they cried together amidst Christmas lights and wrapping paper, she realized that the greatest present her father ever gave her was his personal example of sacrifice and selflessness. Along with the sacrifice he had made to get Elaine her precious bell necklace, he had given a lifetime of service to those in need.

Elaine even remembered when her father was the bishop of the ward and the love he showed all of the members of the congregation. Each year, the family would go on a vacation together, but one year, they took the two weeks of time and money they had saved for a vacation and instead went as a family to paint the house of a widow in their neighborhood.

Her father’s example marks her life and stands as a type of how Heavenly Father feels about all of us. “As my father sacrificed to give me something that was very precious, I can’t help but be reminded of our Heavenly Father and the sacrifice that He made to give us His Son, which makes eternal life and living in eternal families possible… and gives us the hope to carry on, knowing that this life isn’t the end.”

Whenever she hears a bell or sees a bell during Christmas time, Elaine is reminded of her father who gave her such a precious gift, and for her Father in Heaven who gave us the infinite and eternal gift of the Atonement.

Even years later, Elaine wears her bell necklace each Christmas.