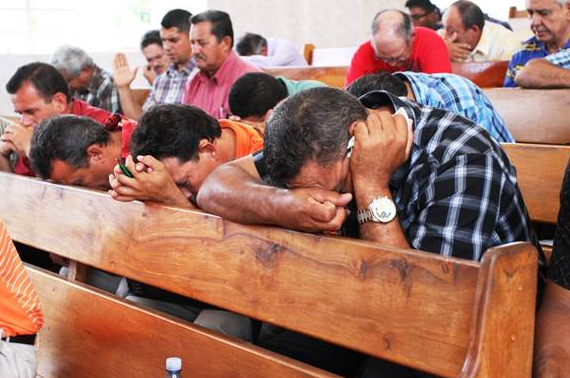 Christian Persecution in the Horn of Africa

Elder Stuart and Elder Doman with Tiblets and her two daughters.

Tiblets was prepared by the Lord to receive the restored gospel of Christ as a young teenager in Africa.  She grew up in Eritrea, which is located in Eastern Africa, north of Ethiopia on the coast of the Red Sea (across from Saudi Arabia).  This region, known as the Horn of Africa, is considered by many to be the most conflict ridden region in the world.  It is a country that has been in an almost constant state of war for over 30 years.  Christians who belong to non-approved churches are persecuted, (the country ranks 10th on the World Watch List of Christian persecution).

Protestant Christians in Eritrea attend every church service knowing that it may be their last. If caught worshipping apart from a government sanctioned church, individuals are subject to arrest and are frequently imprisoned and forced to suffer through inhumane conditions and torture. Imprisonments include days of beatings, hard labor, inadequate supplies of food and water, and other threats. Prisoners are told to deny their faith or face long-term prison sentences.

Accounts of extreme persecution in Eritrea have shot up in the past several years. Some 3,000 Christians are estimated to have been imprisoned in 2010 alone. In 2013,  news of a capsized immigrant boat traveling from Libya to Europe grabbed headlines. Of the 500 people aboard, only 155 were rescued. An estimated 90 percent of those on the boat were Christians fleeing Eritrea and Somalia.

In spite of the dangers and risks, Tiblets was converted to Christianity in her teenage years by a close friend and she became familiar with the way the Holy Ghost communicated to her.  She became a faithful member of a nondenominational Christian church in her town.  She soon began hosting church meetings in her home on Sunday, and then started teaching bible study classes during the week. This was particularly dangerous since arrests often occur during religious meetings in private homes. The president of the country has declared all independent protestant churches enemies of the state. Some of the leaders of non-registered churches have been imprisoned for over a decade.

A short time after her conversion, her parents arranged a marriage for her, and in accordance with her country’s tradition, she married the man they selected.  Unfortunately, he was not a Christian, and Tiblets was unable to continue to practice her new found Christian faith.  As a result, her faith in the Bible and her belief in Jesus started to dwindle.

Her friends continued to encourage her to attend church services and to practice her Christian beliefs.  They begged her to continue to attend personal bible study classes with them as they had done in the past.  Eventually, through the persistence of her friends, together with the promptings of the spirit, Tiblets was persuaded to return to her Christian faith.  She was eventually able to convert her husband and also his parents to Christianity as well.  She began again to host church services and even had a baptismal font built in her home where other new converts could secretly partake of the blessings of the baptismal covenant.  During this time, her son Nahor and her two daughters were born.

Unfortunately, the anti-Christian persecution in Eritrea grew very intense and Tiblets and her family were in constant danger of being imprisoned.  It is well known that various torture techniques are applied in the prisons to force converts to recant their faith in Christ.

At about this time, her husband became sick with malaria and died a short time later.  Tiblets was left a single mother of 3 small children.  Because of her unwilllingess to deny her Christian faith, she was forced to flee into Kenya as a Christian refugee.  The family stayed in Kenya for about a year and eventually were blessed to obtain permission to immigrate to America to seek political asylum.  Tiblets found a place for her family in Arlington, Virginia, where she found work in a nearby restaurant that served Eritrean food.

Eritrea, divided between Christian Tigrinya people in the central highlands and a number of Muslim tribes in the lowlands on the periphery, is regarded as one of the most repressive states in the world after 30 years of constant wars, prompting many refugees to flee the country.

One day while serving as missionaries in Arlington, my companion and I knocked on Tiblets’ door.  She could not understand our English very well, but we shared a message about God and she was glad to listen, in spite of the language barrier.  A few weeks later after completing the missionary lessons, we invited Tiblets to be baptized together with her children, by one holding the proper priesthood authority.

The children had never had a chance to be baptized in Africa due to the persecution in Eritrea and being forced to flee from their homeland to Kenya.   Hence, the children eagerly accepted.  Tiblets, however, declined, saying she had felt the spirit during her prior conversion to Christianity and she could not understand the need to be baptized again.  We tried our best to explain the need for baptism from one holding the proper authority of God, but the language barrier prevented Tiblets from fully understanding the concept of priesthood authority.   Her children were baptized a few weeks later, but Tiblets continued to question the need to be baptized a second time.

Then a tender mercy occurred.  A missionary serving in another ward in Arlington, Elder Nate Bothwell, (who knew about Tiblets and our language barrier), called us with some good news.  In his sacrament meeting that day, a man from Eritrea had shared his powerful testimony with the congregation.  Elder Bothwell immediately called us regarding this recent convert who spoke the same language as Tiblets and who he was willing to come and translate for the missionaries!  We took this good brother with us to our next lesson with Tiblets and she accepted our baptismal invitation when she grasped the concepts we were teaching her about the apostasy and restoration.

Tiblets was baptized one month later and joined her daughters in taking upon themselves the name of Jesus Christ and have become a part of his true church.  She now has an understanding of the need to be baptized by one holding the proper authority, even the restored priesthood of God.  My testimony has grown so much listening to what she gave up in Africa to follow Christ!  She is so grateful to have found the fullness of the gospel of Jesus Christ, with the full priesthood power of God.

Thankyou for remembering to not be complacent amidst all the blessings of freedom we enjoy in North America to keep in my mind all those who suffer any persecution such as those in the Horn of Africa. Really, I had no idea this was going on in Eritrea.

Thank you for sharing with us that wonderful experience. It helped me to understand what Christians still have to go through to practice their religion. Thank you for being such good missionaries.