Mormon Historic Sites Foundation Finding the Funds to Preserve the Past 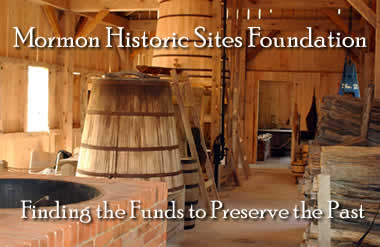 Historic sites and the stories that go with them have a way of being lost. They are encroached upon by traffic or developers, their records are tossed in an attic and then forgotten-unless someone with a vision takes a hand to stop the steady disappearance.

That Kirtland has been developed with the addition of a sawmill, ashery, Newel K. Whitney home and Johnson Inn instead of dribbling away down history’s drain is in part thanks to the Mormon Historic Sites Foundation who helped raise funds for the work.

Historical preservation is not inexpensive work. It involves years of research to find and verify facts, archaeological digs that may take months of dirt sifting, and a team of people who can work with the local government, buy land, identify legal challenges, design the site and understand the historical period.

Who pays the bill? The Church has certainly played an aggressive part in acquiring and celebrating its significant historical sites. Because revelation is continuous and the doctrine unfolded line upon line, we are our history. We remember. Cut us open and we are the Sacred Grove, the Kirtland Temple, the trail west.

Still, the Church’s first role is the saving of souls and its money is spent carefully and judiciously. The Church cannot be expected to restore every significant site in its history. That’s where organizations like the Mormon Historic Sites Foundation come in.

According to Kim R. Wilson and Richard N. W. Lambert, chairman and vice-chairman of the foundation’s Board of Trustees, the group first came together in 1992 with the sole purpose of doing something to preserve Ensign Peak. This knobby peak which overlooks Salt Lake City played a significant role in Church history.

Speaking in Salt Lake City in the nineteenth century, George A. Smith described the history of the peak:

After the death of Joseph Smith, when it seemed as if every trouble and calamity had come upon the Saints, Brigham Young who was President of the Twelve, then the presiding quorum . . . sought the Lord to know what they should do, and where they should lead the people for safety, and while they were fasting and praying daily on this subject, President Young had a vision of Joseph Smith, who showed him the mountain that we now call Ensign Peak . . . and there was an ensign fell upon that peak, and Joseph said, “Build under the point where the colors fall and you will prosper and have peace.” The pioneers had no pilot or guide, none among them had ever been in the country or knew anything about it. However, they traveled under the direction of President Young until they reached this valley. When they entered it President Young pointed to that peak, and, said he, “I want to go there.” He went up to that point and said, “This is Ensign Peak” (Journal of Discourses 13: 85-86).

The pioneers arrived in Salt Lake valley on Saturday, July 24, 1847, observed the Sabbath the following day, and then with Brigham still very ill and taken on horseback to the top, on Monday, July 26 the Brethren ascended Ensign peak and raised the American flag, the “Ensign of Liberty.”

By 1992 all but seven acres at the very top of the peak had fallen into private ownership. Access to the peak was at risk, and the group that became the Mormon Historic Sites Foundation began meeting to assess what they could do to preserve the site. These were people skilled in the law and land; they knew how to work with developers and the city.

A land swap was arranged between developers and the city, preserving 70 acres for city ownership. They were also able to negotiate a 250-foot access to the property in some of Salt Lake’s most expensive and prestigious real estate so that development wouldn’t overtake the peak. These were delicate issues in a highly affluent community, but they learned how to negotiate, how to contract with architects and contractors, and they learned how to raise money, coming up with $700,000 to create appropriate memorials and signage on the peak. Their memorial was dedicated by President Hinckley in 1996, the commemoration of the statehood year.

Their goal accomplished, it might have been the end of their group. Kim Wilson said, “We might have just slapped each other on the back and wondered each time we saw each other on the street if there were something else we could do.” Still, they had learned certain skills, including fund-raising, and as an independent group, they could work easily with government, private individuals, and other independent foundations in preservation work.

It was about this time that they began to learn that a Kirtland project was underway to develop and restore a number of buildings significant to the Restoration. The mill and the ashery had played key roles in the building of the temple; the Johnson Inn had been a gathering spot The hang up for the project was a preliminary issue-the realignment of the roads. As it stood, the Newel K. Whitney store stood on Kirtland’s busiest corner, with a jammed road that bisected the historic village. Traffic noise made it difficult to contemplate sacred things and Wilson said, “You could barely walk across the busy street without taking your life into your hands.”

The community had approved the moving of the road so that it swung around the sites instead of through them, but funding it was so far down the list of the county, it would be at least twenty years. “It was a four million dollar nut that had to be cracked,” said Wilson. It not only required the placement of new roads, but the construction of two bridges across the Chagrin River.

The foundation and the many other individuals and groups involved in the fund-raising had to escrow the funds before the city would contemplate the road project.

“The process of getting that approved by the city was its own miracle,” said Kim Wilson, involving Saints who had been working on this project a long time. “There was a little miracle here and a little miracle there. When the approval was received, the fundraisers had the money ready to go.”

Some people donated with a specific site in mind; others contributed to the overall mission of the project. The challenge was to raise a donor’s consciousness to the worthiness of a particular project. “The generosity that came forth was incredible.” 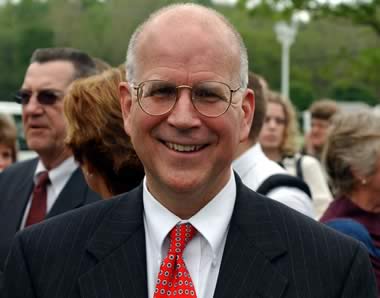 Richard Lambert said that the Mormon Historic Sites Foundation has a number of ongoing projects beyond Kirtland. Many of these are sites which may be less central to the Restoration or may be owned by others who want to work in partnership with the foundaton. For instance, they are working with The Community of Christ (formerly RLDS) in doing some archaeological work both in Haun’s Mill and at the Far West cemetery, planning to develop appropriate memorials there.

The Far West cemetery is the probable final resting place of David Patton, the senior member of the Quorum of the Twelve in 1838, and approximately 350 other Saints. It is currently a ploughed field, indistinguishable as a cemetery. The foundation is still in the decision-making process with other groups deciding what the final memorial will be.

Lambert said, “I have a great, great, great, grandmother buried there, Polly Keeler Clark, and look forward to a place that we hope will be much like the cemetery at Winter Quarters where individuals can come and remember.”

The Mormon Historic Sites Foundation has also worked with the city of Lexington, Missouri, near where the steamship Saluda blew up, carrying Saints hoping to make the journey west during the migration period. They are also seeking to preserve the Oneida Stake Academy in Preston, Idaho, one of the last remaining structures of the Church to build schools. Both Presidents Harold B. Lee and Ezra Taft Benson attended school there.

The foundation which Lambert calls “home-grown and in its fledgling stage” does not intend to limit its work to the United States. Its seven-member board and executive director, Fred Wood, will look wherever there is history that should be preserved. Lambert said, for instance, that England and Canada, contain many places significant to Church history.

He said, “We hope to be able to lend the Church the assistance we can to preserve significant sites, and we also hope to partner with other groups in this work. The Church needs to safeguard its resources for the sites of great consequence like Palmyra, Kirtland and Nauvoo. It probably falls to people who are willing to do many things of their own free will to preserve the rest.

“My hope is that my kids and grandkids will be able to visit and appreciate the significance of the events that took place at these sites.”